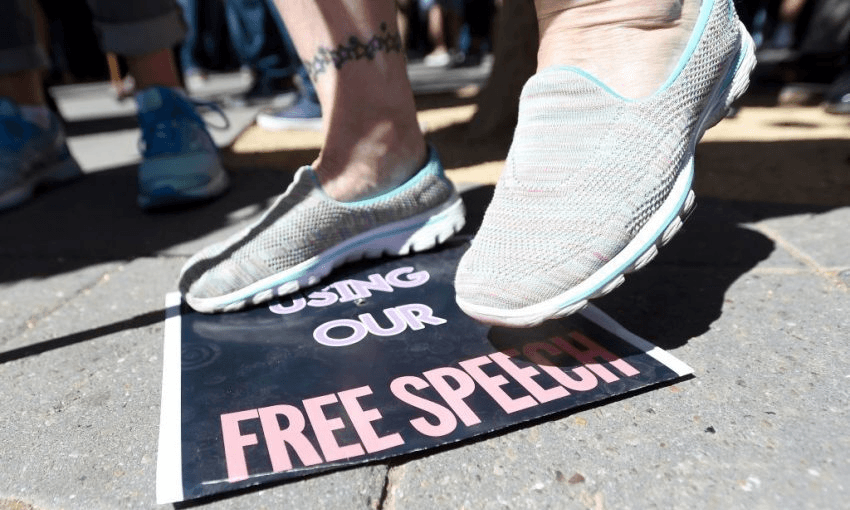 A protest at the University of California, Berkeley campus in 2017 (Photo: JOSH EDELSON/AFP/Getty Images)

Paradox, utopia and Don Brash: on liberalism and free speech

A protest at the University of California, Berkeley campus in 2017 (Photo: JOSH EDELSON/AFP/Getty Images)

The function and frailty of liberalism has been thrust to the fore as New Zealand debates the meaning of free speech. Yet the biggest threat to liberalism may be the failure of elites to make the systems and institutions of modern liberalism work for the rest of us, writes Danyl Mclauchlan

If, like me – and Dr Don Brash – your ancestors are from Europe, you’re related to people who spent a lot of time 400 years ago arguing and fighting and dying over what seem to us like bafflingly weird religious disputes. Should the scriptures be translated? Should lay people read them? What was the correct policy on clerical vestments, and should priests who disagreed with it be burned alive or tortured to death?

These were hugely divisive issues – driven, not incidentally, by advances in media and communications technologies: the printing press, the pamphlet, the emergence of mass media – and they helped trigger some of the most bloodthirsty and destructive conflicts in human history. As they emerged from the carnage European intellectuals and philosophers slowly groped their way towards a set of ideas and institutions designed to prevent another century of civil war and religious genocide.

We collectively refer to these ideas as liberalism: the then-novel idea that reasonable, intelligent people could disagree about religious and political beliefs and not kill each other over them; that the state shouldn’t censor or imprison or execute you for what you said, or thought; that people had the right to be free and there should be institutions and norms – democratically elected governments, legal systems, free markets, freedom of speech – to protect freedom, litigate ideas and solve disputes.

The early liberal theorists and politicians were wealthy white men and they didn’t see any contradiction in claiming to celebrate human freedom while invading and colonising other countries and enslaving other races, or feel that the democratic franchise should extend to women or unpropertied men. The past 150-odd years of western political history has been the agonisingly slow, often retrograde fight to expand the liberal franchise to everyone else in those societies. Historians of liberalism tend to see it operating in waves, or phases, triggered by the focal points for conflict during that time – religious freedom, economic freedom, political freedom, social freedom, inequality – and as an obviously unfinished project.

Liberalism is a paradoxical and explicitly non-utopian ideology. Individual rights conflict with each other: your right to burn rubbish in your garden conflicts with my right to breathe clean air. And there are tensions within liberalism itself, the most famous being the conflict between economic and social liberalism: if the state takes some of your money in taxes it’s compromising your freedom but if it spends it on health care and education for poor kids then their freedom over their own lives is massively increased. Different people have different beliefs about where the balance lies; our political system mediates and compromises over them. There will never be a perfect liberal society.

The 20th century saw the emergence of rival ideologies that claimed they could deliver perfect political and economic systems if they cleansed their nations of all their foes, in a race war if you were a fascist or a class war if you were a communist; but the results were famously, horrifically dystopian. That’s why liberal intellectuals at the end of the 20th century declared that we were at “the End of History“: that liberalism, flawed and compromised, is as good as it gets. It takes us forwards, very, very slowly in the direction of utopia – but never arrives there.

And that’s why so many commentators and political theorists are aghast at the rise of Trump, the election of white nationalist parties in Europe and, in a far less dramatic but much closer instance, Massey University’s decision to ban Dr Don Brash from speaking to its politics club. There’s no such thing as an absolute right to free speech: we ban all kinds of speech – you’re not allowed to go about promising strangers you’re going to kill them. And we ban hate speech: the incitement of violence or prejudice “on the ground of the colour, race, or ethnic or national or ethnic origins of that group of persons”.

But hate speech is tricky because it’s very, very easy to use the critique of hate speech to try and shut down the speech of people you simply don’t like and don’t agree with, and this is what most commentators think the vice-chancellor of Massey University has done with Don Brash. Some people have asked, “Why does that matter? Brash still has free speech – he’s been on the damn media non-stop since this happened! And besides, everyone knows what he has to say, and it’s rubbish. Who cares if he got banned?”

Partly it’s about the very dubious efficacy of deplatforming a speaker, which instantly creates controversy and gives them a huge media platform to promote their views which, if you really believe their speech is hate speech and harmful to minorities, delivers the exact and vastly amplified opposite of what you were trying to achieve. Every. Single. Time.

Partly it’s about the role of universities. Free speech isn’t just a nice-to-have, a noble aspiration: it’s a practical recognition that experts and elite consensus are routinely wrong about vital issues and that dissenters need to be able to say so, especially at universities which are supposed to be ground zero for open debate and scientific rationalism. (A favourite example: Dr Barry Marshall, an Australian physician who decided that the global scientific consensus on stomach ulcers was incorrect: that instead of “stress and spicy food” they were caused by a bacterial infection, but was unable to convince his peers they were wrong so he drank a broth of bacteria and developed chronic peptic ulcers. He won the 2005 Nobel Prize for Medicine.)

But Brash isn’t a historian and the speech people object to are mostly just debunked tropes that have been around for decades – and he wasn’t even invited to Massey to speak about them! – so here’s a more idealistic, deeply liberal answer. A diverse, multicultural, pluralistic society is like a big city that we’re all living in together, built high in the air on a pile of stilts balanced above the catastrophe of history. You want to keep people like white supremacists from kicking out the stilts under the houses of minority groups, but you also want to stop partisan institutional elites from kicking the stilts out from under people like Brash.

Because you might not like him or care about him, but once those partisans – always as convinced of their own self-righteousness as any 16th-century Puritan – start knocking away the norms of liberal society, rival groups and institutions will naturally retaliate and things can escalate and unravel incredibly quickly. Progressive values and vulnerable minority groups are always the primary victims in illiberal regimes. Defending liberal norms isn’t a noble and idealistic project so much as an act of basic self-preservation.

Yet, having said that I want to end with the argument that I don’t think free speech controversies, or white nationalists, or the dreaded Cultural Marxists that keep Jordan Peterson awake at night, or even rampant vice chancellors are the greatest threat to liberalism. Our biggest problem, I think, is deeper but less sensational, and is an ongoing failure of elites in liberal societies to make the systems and institutions of modern liberalism work for the rest of us: a just and fair criminal justice system; free markets that aren’t manifestly rigged; functional housing markets, fair labour markets. It’s a lot easier for some charismatic preacher to walk out of the desert – or, today I suppose, out of YouTube’s search and discovery algorithm – and convince people that the system – that city, stilts and all – needs to be burned down, if key components of it are conspicuously rotten.