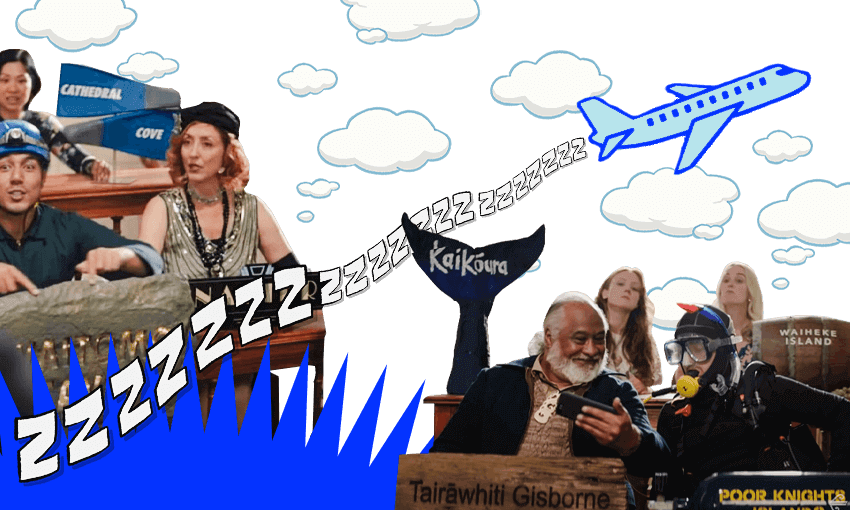 Why Air NZ’s tame safety video should run and run

It begins in the most boring place possible: a council meeting. Representatives from various Aotearoa regions have gathered in Te Rerenga Wairua Lighthouse at Cape Reinga, and they’re already bickering. Who has the rightful claim to the title of the eighth wonder of the world?

Milford Sound wants it. So does Franz Josef. Taranaki thinks it should be theirs. Taumatawhakatangihangakoauauotamateapokaiwhenuakitanatahu, the tongue-twisting Porangahau hill, thinks it deserves it. It’s a solid bet: you can already imagine the laughable TikTok attempts from bamboozled tourists trying and failing to pronounce its epic name.

Along the way, there are trips to many of those places, with New Zealand’s scenery — rivers, lakes, glaciers, mountain tops and a salmon smoker — on full display. There’s also a dumb question: “Yeah, nah. Does it mean yeah, or nah?” Everyone already knows the answer to that. It’s, “Yeah, nah.” Duh.

Honestly, by that point in Air NZ’s latest Kiwiana-laden safety video, dubbed “Discover the 8th Wonder,” I’d checked out. Wedged next to my family in a seat on a recent holiday flight to Christchurch, our first time airborne in 12 months, I’d been preparing to endure more safety video horrors.

Why? Because, over the past decade, Air NZ has tried passengers’ patience by compiling a collection of annual clips that range from “What have they done now?” to “WTF?”

A quick recap: In 2011, the overexcitable exercise guru Richard Simmons wore sequinned singlets and sweat bands as he encouraged travellers to dance their way down aisles and into their seats; in 2012, pilots became dwarves, passengers turned into hobbits and hosts and hostesses were elves in a belated Middle-earth-inspired skit.

In 2015, Israel Dagg was forced to rap, tunelessly, to the Men in Black theme song; then, in 2017, things seemed to reach their nadir when Katie Holmes and Cuba Gooding Jr turned up as ill-advised gods, roasting marshmallows in Rotorua’s mud pools in all-white outfits.

That’s already quite a list, a quickfire journey through a fantastical decade of Air NZ safety videos, those four-minute short films we’re all forced to watch before takeoff while travelling around the country, and, when Covid-19 restrictions allow it, beyond.

They didn’t need to make them so extra, but clearly, the directive, and a tonne of money, was coming from above.

Yet all of that looks tame in comparison to 2017’s It’s Kiwi Safety, the grandest safety video Air NZ has ever produced, with a 600-strong cast, a jacked hip-hop beat inspired by Run DMC’s ‘It’s Tricky’ and Sisters Underground’s ‘In the Neighbourhood’, raps about life preservers performed by Kings, Randa and Theia, and a four-minute short film that features Julian Dennison on the decks.

I love all of the people involved in that video. Ask anyone and they’d probably say the same thing. Yet the backlash has become the stuff of legend. The longer It’s Kiwi Safety played, the bigger the complaints got. The video’s YouTube page remains full of critics. “On behalf of the people of … Nova Scotia I apologise to all the people of New Zealand for having to endure this. You deserve better,” wrote one overseas viewer.

The list of famous haters is lengthy. A passenger sitting behind the Florida rapper Denzel Curry while visiting to perform at the Laneway music festival reported that he muttered, “It’s still going,” at the two-minute mark. The celebrated soul singer Anderson .Paak tweeted about it with a facepalm emoji. Even Donald Glover, a crossover star of film, TV and music, was forced to endure it.

Remembering the most hated Air NZ safety video of them all

All of these incidents made headlines. All of it made us look like buffoons (no offense to buffoons intended). In a matter of months, it became a national embarrassment, one I was forced to decry at the beginning of 2019 after making several anger-inducing flights around Aotearoa. “Air NZ, your video needs to disappear immediately before it does lasting damage,” I wrote.

Twenty-four hours after that piece was published, Air NZ had pulled the clip and replaced it with re-runs. Phew. Job done. You’re welcome.

Three years on, I’m back to tell you that Air NZ’s latest safety video is utterly inane, perfectly uninteresting, terrifically boring. There are no big names. Zero overseas celebrities show up. Rhys Darby doesn’t make a cameo as a mustachioed cop. Neither does Paul Henry, or Betty White (RIP). No one sings anything. No one raps a single word.

In other words, it’s brilliant. Every time I looked up to see it playing while flying around the country over the past two weeks, my brain went “Meh” and I returned to my book. It’s exactly the way it should be. Air NZ has finally released the kind of safety video they should have been making all of this time, one so well thought out and perfectly executed and bang on target that no one gives it a second glance.

It’s so good, this should be the last safety video Air NZ ever makes. Let’s allow it to run, and run, and run, until we forget all the other ones ever existed at all.