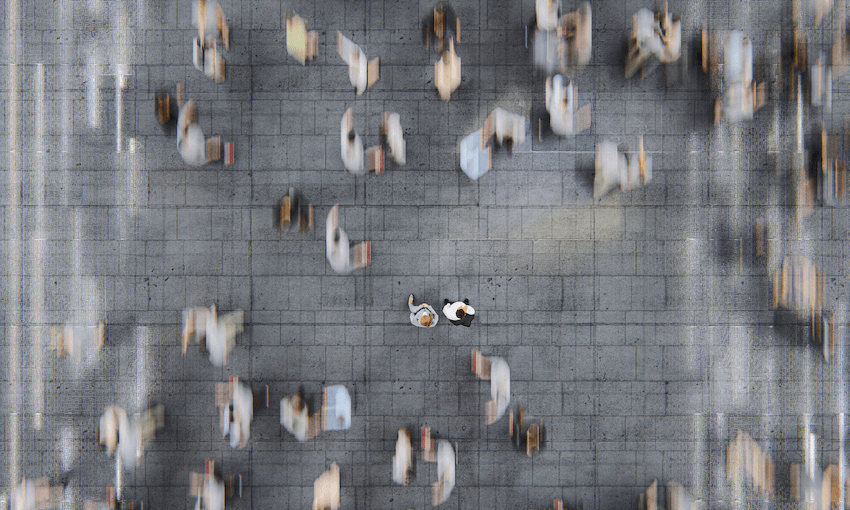 A few metres from normality: On anxiety and alert level two

They’re calling level two a return to normality, but for many of us that’s not really true. Sam Brooks, for one, is anxious as hell about the prospect of a world that’s more open, and more dangerous.

Less than two minutes after Jacinda Ardern announced we would be moving to level two, I messaged two of my best friends: “Wine at mine Thursday?”

Within a minute both responded. “Keen.”

There wasn’t a doubt in my mind that I would be seeing these two people, one way or another, as soon as I was legally able to. I imagine thousands of similar plans were being made across the country yesterday. People are prepping to pop their bubbles, and I’ve got a bottle of fancy champagne that’s been waiting for the same treatment.

I’m so excited to see my two friends, to breathe the same air. I’m excited to share a bottle of expensive wine in cheap glasses. I’m excited to talk about the nothing that we’ve done and the everything we’ve felt. And I’m excited to do it over and over again for the foreseeable future, not just with those friends but with others.

But I’m also scared as hell. I’ve always been the one in group projects who does all the work because I don’t trust anybody else to do it properly. But that doesn’t work when it comes to a pandemic. It doesn’t work with a team of five million where everybody has to do their part.

A failing grade, to stretch the metaphor, means a different thing to some of us than others. I’m immuno-compromised (which, depending on my mood, I alter to immuno-fucked). That means I have a reduced ability to fight off diseases that non-compromised people might shrug off. Before Covid-19, I’d been dimly aware of it. I got my annual flu vaccine, I washed my hands, I was vigilant if I got a cold.

But when Covid-19 struck, and before the alert levels were even introduced, I was terrified. I didn’t want to be one of an ever increasing death toll (March is a terrible time to die – better to wait until the winter fashions are out, so your mourners don’t have to wear that black outfit just the once). So when the first cases started to appear, I self-isolated myself. That was a week before the alert levels arrived.

Throughout lockdown, I’ve been nervous but calm. I’ve fielded questions from my best friend about his bubble situation (who can he see, when can he see them), I’ve stayed on top of the news, I’ve Zoomed my loved ones. Most depressingly, I’ve thought of the good old times when zoom was a verb a child would use to describe the sound a car makes, rather than a verb that an adult uses every day in a professional capacity.

Yesterday’s announcement brought a tremendous amount of worry for me. Of course I wanted the country to return to level two. It meant that our team of five million was doing well. They were doing the readings, handing in their homework and putting in the work.

Yet the anxiety was not dissimilar to what I felt during the previous move from level four to three. With every loosening of restrictions announced, I could see a hundred people trying to figure out a loophole – “Yes, but what is 10 people really?” Everybody suddenly becomes that dick in your first year philosophy class asking what is an essay anyway. People who you wouldn’t trust to tell you the time of day suddenly become experts on what social distancing really is.

It’s not necessarily that my anxiety is about being unable to trust anybody; I’ve had that my whole life. Distrusting “a team of five million” is not significantly different from distrusting everybody except a select few. It’s the anxiety of having been inside for two months, having only had face-to-face contact with one person, and then my world suddenly being flooded with strangers.

I love going out to bars and restaurants with my friends – I truly miss the beautiful taste of a drink that arrives after the swipe of a debit card, rather than my own laboured heaving of a cork out of a bottle. But I’m not sure how easy it’s going to be to return to that simple pleasure when I’m worried if this surface has been properly cleaned, or if that person nearby has been around someone who hasn’t been careful.

For most people, level two means a turn down the road towards normality. It’s not that for me. I’m not sure whether I’m ever going to be able to go to a bar and not worry that it’s a gamble with my life. A low-level gamble as they go, a scratchie, but a gamble nonetheless.

It’s also not a return for normality for many others. Despite the economy opening up, many of us are going into level two without jobs. Entire industries have been gutted. God knows how many restaurants or bars will actually open when they get the go-ahead. Our entertainment industry has pivoted to managing just OK, but a pivot back to normal is far from a certainty. For a lot of people, level two is going to mean facing a reality that has been lying hidden for the past six weeks.

When you’re surrounded by abnormalities, far closer than two metres away, you can accept your reality. Everything is equally ridiculous, so everything is equally unreal. We’re going to close down the entire country and shut ourselves away from each other for two months? A significant proportion of the country is going to need to be financially supported by the government, technically turning many of us into beneficiaries? Pile it all on, why not?

But as we turn towards normality, and towards reality, the loss of the past weeks is going to hit us. We’ve lost jobs, we’ve lost people, and we’ve lost a sense of security. Daily briefings from a charismatic prime minister and a reassuring civil servant have only gone so far to mitigate that. There’s going to be a long period of adjustment and acceptance. Some of us will have to learn not to hug our friends when we see them on the street. Others will have to learn what it’s like to not have a job, maybe for the first time ever. We’ve been trapped in bubbles with ourselves and our distorted realities for the past two months. Now they’re popping, and I think we’re realising that what we’re coming back to isn’t going to be normality. Nothing even close.