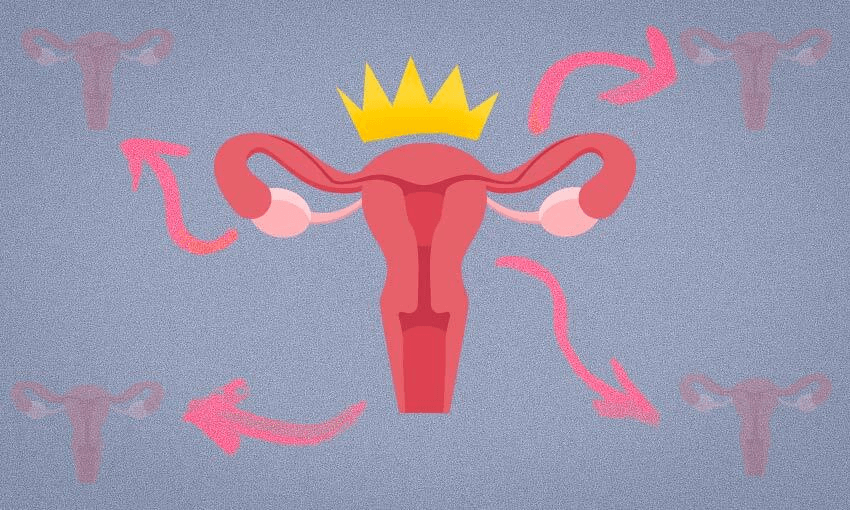 All hail the Alpha Uterus? Separating fact from fiction on period syncing

Ask almost anyone who menstruates: when you’re living with other people with periods for long enough, your cycles will become aligned. But are period syncers just fooling themselves? Asia Martusia King investigates.

This story was first published in Critic, the University of Otago student magazine.

The Alpha Uterus. A uterus so formidable, brimming with such sheer hormonal force that it annexes the uteri around it, pulling them into orbit and causing them to sync up. Does such a legendary power really exist?

Period syncing is based on the idea that when a bunch of menstruating folk live together for long enough, their cycles coincide. One person — the Alpha Uterus — determines when this occurs. Anecdotally, period syncing has been accepted as a real thing, but there’s a lack of medical data supporting this. We have exactly one study from the 1970s that confirmed period syncing in dorms. Since then, with the advent of period tracking apps, massive studies have been undertaken that suggest it’s likely a myth. There’s a disconnect between established and folk science, and we still have no real answer.

Luckily, we have Otago University students as guinea pigs. Critic asked students through a very scientific Facebook poll whether or not they’d ever synced up in flats or halls. The results: 169 (nice) people said that they had synced. Exactly one person said that they hadn’t.

Anna is a student whose flat has been meticulously tracking their periods since March. “We first put the calendar up because we thought it would be cute to see when each other had our periods, so we could get each other chocolate or something,” says Anna, who’s the most wholesome bitch in the world. “Now it’s kinda like, let’s see if it’s gonna sync.”

They haven’t fully synced yet, but there’s an increasing overlap. There is also a clearly defined Alpha Uterus at play. Interestingly, the Alpha Uterus’ influence seems to go even beyond syncing. It has also reportedly induced cramps amongst the other flatmates.

“In the first month when we moved into the flat, we all had our periods at the same time,” Anna says. “One of our flatmates gets pretty bad cramps. The rest of us don’t — but then we all got really bad cramps, and they’ve been bad ever since. We were like, ‘it was you!’ Maybe it’s some weird sympathy pain.”

This could be witchcraft, or it could be legit. A 2017 study called “Women Living Together Have a Higher Frequency of Menstrual Migraine” reported exactly that. One woman in the study had a migraine, and it spread throughout the participants. Why shouldn’t this include cramps as well? One comment on the Critic poll said that in their home, “mood swings and breakdowns definitely got in sync”; “group cry sesh” was the response.

It looks like period syncing could encapsulate much more than just bleeding. A similar thing called Couvade syndrome has been reported in men whose partners are pregnant. They can experience sympathy pregnancy symptoms, such as nausea and back pain. Empathy and hormones are suggested to underlie this. “Ew, bullshit,” I thought. “You aren’t pregnant, shut up.” But maybe I’m being too quick to judge. Ruby, a student living with five women and one man, reports that her male flatmate also gets moody when the women are menstruating. This could also possibly be because he’s living with five moody menstruating women though.

Anna mentioned another interesting phenomenon. One of her beta friends said she would “catch” periods off menstruating friends after sleepovers. “I still think she was wrong and it was a coincidence, and she just had a weird cycle, but she had it every two weeks and always when she had stayed over at a friend’s house she’d get her period the next day if they had it. She was adamant it was happening. Pretty intense.”

Molly’s periods were regular until her flatmate came off contraception. “I noticed after getting my IUD that my periods are very consistent. I also noticed that after about four months, when my friend changed her contraception, the timing of my period starting changing. Now at this point we’ve been synced up for the last two months. I don’t know who the Alpha was, but it might have been her since it overrode my IUD.

“My theory is that it’s hormones, the extra level of oestrogen, that make you susceptible to the other person’s periods. Whoever has the Alpha Hormones is the Alpha Uterus. Different contraceptives have different levels of progesterone. I have no hormonal contraceptive right now and I’m the beta uterus.”

Supposedly, the closer you are to your menstruating pals, the closer you sync up. I decided to consult the council of lesbians for answers. Thirty percent of lesbians surveyed were synced up with their girlfriends, while 70% weren’t. This isn’t including my dad, who also voted “yes” on my Instagram poll.

Local lezzie Joanne has been with her girlfriend for four years, and lived together for two. Despite lesbians being the ultimate gal pals, their periods only synced twice until a new flatmate moved in. The Alpha Uterus strikes again.

Joanne has no qualms about the Alpha Uterus usurping their sapphic bond. “The Alpha Uterus was very handy, as you knew when to prepare. She dragged us into her orbit. You can buy your pads and get your fucks out.

“There are benefits of syncing. You can all go to the Red Tent and have fun. We could all commiserate with each other, and share our tears and period snacks. The cons are that you’re in too much pain to have fun in the Red Tent. Everyone’s kind of grumpy at the same time. You can’t do favours for each other because you’re also on your period. Then there’s nobody to do nice things for anybody.”

Ruby’s flat has a different Alpha Uterus every month, a domino effect during a wave of periods where the Alpha starts and betas follow. “Whoever is Alpha gets bragging rights for the month. Chocolate consumption goes through the roof, as does the making of pudding, and usage of heatie wheaties.”

However, there is still a reigning Alpha who dominates the playing field. Ruby believes there are certain qualities that make an Alpha Uterus. One flatmate in particular can be pinpointed, Ruby says, as she “has the strongest sexual aura out of everyone and she’s very influential. People want to be like her. They like to imitate. I’ve seen tomato sauce stains, I think people have been faking.”

I recall my floor in first year syncing up. We made a special trophy for the Alpha Uterus. If this is the case, why aren’t university halls worldwide scrambling for tampons at the same time every month? There’d be a severe shortage. Maybe it’s because we were a small group of close friends. Maybe it’s because I have always had a feeble, beta uterus that cowers and whimpers in the Alpha Uterus’ wake.

Period syncing, whether real or not, has been established in menstruation canon. Anna muses why this might be. “When I was younger, it was almost a fact everyone talked about. It was stuck in my head,” she says. “When I actually Googled it, there was no science behind it. Maybe it’s just been a coincidence, or a historical thing that’s been around for a while.”

“If you’re living together in a hall, you’re bound to sync up with at least a few people,” Joanne says. “I don’t know if it necessarily means you bleed at the same time, or if your cycles coincide in a regular and reliable way.”

Ruby, despite her flat’s Alpha Uterus bragging rights, is a staunch anti-syncer. Like Joanne, she has been with her girlfriend for years and never synced up once. “People think that periods have a spiritual connection, that you’re best friends and sync up and are on the same wavelength, but I watched a Buzzfeed video when I was very young that said it didn’t exist.

“Women’s cycles vary and sometimes those match up. Sometimes we’d sync up perfectly, and sometimes they wouldn’t at all, and we just pretended that never happened. We’re a coven so we like to pretend we’re connected.”

Adds Anna: “It’s probably one of those things where they haven’t studied women’s anatomy over the years as much as they have men’s. Maybe there is something there.”

We don’t know if period syncing is real, but it’s a bit sus that only 0.5% of students surveyed said they hadn’t synced up. It also looks like lesbians don’t sync up with their girlfriends very often. Having a beta uterus may be a sign of homosexuality.

In Critic’s poll, 84 Alpha Uteri were tagged in the comments. Critic recommends placing all of them in a room for five months to determine the True Alpha Uterus. There can only be one.