The Food and Grocery Council has barely been dented by the revelations of Dirty Politics. Why is that, wonders the NZ Herald’s Simon Wilson in this Herald Premium article.

Why hasn’t the government banned sugary drinks in schools? And how come KFC is able to promote its chicken as the perfect food for every occasion you could possibly think of?

Isn’t this – a major public health issue, especially among poor and vulnerable communities – exactly the sort of cause that motivates centre-left MPs to seek power in the first place?

So why no action? The answer is a mystery. But food and public health occupy an extremely unsavoury place in the political world and earlier this month we were reminded about the how and why.

Hager had shown that Graham appeared to be engaged with Slater in a deceitful and slanderous campaign to discredit the health advocates, using blogs on Slater’s website Whale Oil Beef Hooked, and that his client was the Food and Grocery Council (FGC).

The FGC is the industry group representing supermarket suppliers. It is dominated by the large companies, including Coca-Cola Amatil, Fonterra, Heinz Wattie’s and, of course, those in the biggest sales sector in supermarkets: alcohol companies.

Originally, the FGC and its chief executive, Katherine Rich, also faced defamation charges. The FGC and Rich settled in October. The terms of their settlement were not disclosed and no apology or acknowledgement of wrongdoing has been made public.

The FGC accepts it paid Graham for his services. But this week said it “wishes to reiterate it did not pay anyone to write any stories on its behalf on Whale Oil, or any other publication. Nor was NZFGC otherwise involved in any such stories.”

At the start of the trial, Slater “consented to judgment”. This meant he abandoned any defence and is now waiting to learn his fate.

The trial then heard an excoriating opening address by the lawyer for the three plaintiffs, Davey Salmon. Following that, Graham’s own lawyer said his client wished to apologise “sincerely and unreservedly”.

Graham, he said, was “now aware that a number of statements that he made about the plaintiffs were untrue, unfair, offensive, insulting and defamatory”.

The lawyer also stated, “Mr Graham acknowledges the plaintiffs’ work on the harms of tobacco, alcohol and processed food and beverages was undertaken responsibly, and in the public interest.”

Even for a legal settlement where one party accepts they were in the wrong, the language is extremely blunt. The amount Graham agreed to pay has not been disclosed. 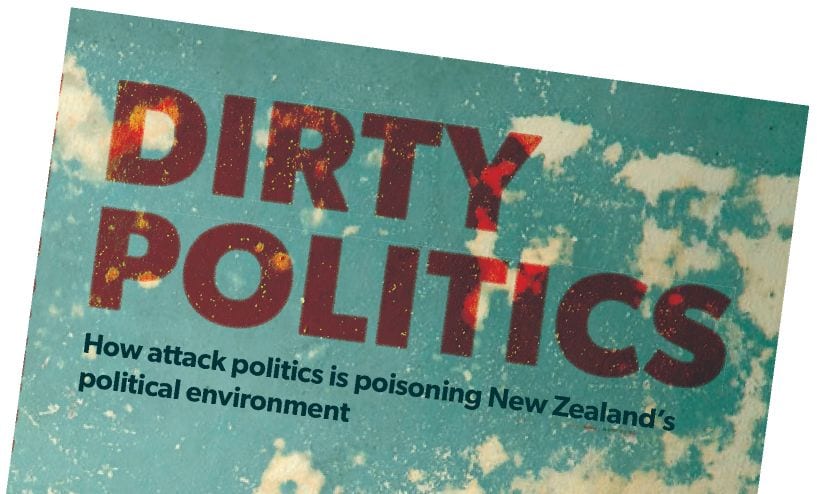 The book at the centre of the allegations: Nicky Hager’s Dirty Politics (2014)

The three health experts at the centre of this case are Doug Sellman, a professor of psychological medicine at the University of Otago and the founding director of the National Addiction Centre; Boyd Swinburn, a professor of population nutrition at the University of Auckland; and Shane Bradbrook, who was at the time director of Te Reo Mārama, the Māori Smokefree Coalition.

They are, collectively, among this country’s leading experts on alcohol, junk food and tobacco. Outspoken defenders of the public interest in three key areas of public health.

In the book, Hager revealed that Graham ran an “attack campaign” designed to discredit all three men. This included blogs he wrote for Slater’s website Whale Oil Beef Hooked, which appeared under Slater’s own name or pseudonyms.

What was really going on here?

It’s tempting to think the whole thing was merely a scheme cooked up to provide Graham and Slater with an income. What Slater likes to call “troughing”. But would the FGC have stood for that?

It’s also tempting to see this as a dispute between a renegade right-wing fringe and do-gooding liberals. National Party bovver boys vs the Nanny State. But again, does that explain the FGC’s involvement? A lot of money changed hands.

This was a scandal in 2014, when the revelations surfaced, and it remains a scandal today.

Hager reported details of the relationship between Graham, the FGC and some of its members and also revealed the contents of emails from Graham to Slater in which he referred to “KR hits”. According to Hager, KR is Katherine Rich and “hits” were attacks on public health advocates.

Again, for the record, FGC continues to deny involvement “in any such stories”.

This scandal has barely dented the FGC and, despite the opprobrium it generated, Rich has remained in her job. There’s a reason for that: she’s very good at it. The FGC under Rich has managed to persuade successive governments, including the current one, to stay away from taxing or regulating harmful foods and beverages.

The stakes couldn’t be higher. We know that sugary and fatty foods are bad for us. We know we’re facing an obesity epidemic: worldwide, obesity has tripled since 1975, and New Zealand is as caught up in it as any country.

Sooner or later, it is surely obvious, we will decide to treat addictive junk foods the way we now treat tobacco.

The FGC wants it to be later. As later as can possibly be. But the scary lesson it faces is this: if we can change the national consciousness on a product as sexy, as addictive and as deeply rooted in the life of the nation as smoking used to be, we can change it on anything. This is from the abstract of a leading New Zealand study the same year Dirty Politics was published: “Indices of sugar intake have been associated with aggressive behaviour, attention deficit … and suicidal thoughts in cross-sectional studies. Longitudinal studies have also linked soft drink intake with impaired cognitive development. We believe that banning sugary drinks from schools will assist teachers and students to better achieve their learning goals, with a side effect of improving their health status.”

The Ministry of Health supports schools that allow their children only water and low-fat milk. Schools that have done this report exactly the improvements noted in that study.

Coca-Cola Amatil and other such companies say no. The voices of Boyd Swinburn and co have been undermined. The force of the Food and Grocery Council is strong.

That’s down to Katherine Rich. Yes, there is a bad smell around Carrick Graham and Cameron Slater. But the Food and Grocery Council can pin the pegs on their noses: they’re getting what they want.

This isn’t just about supermarket groceries. Take a look at what KFC is up to. Its saturation TV advertising tells us KFC is great for snacks, office lunches, party food, family food, lonely hearts food, TV food, food for when you’re in the middle of nowhere, food for any and every occasion you could possibly think of.

KFC, say the ads, is perfect for eating all the time.

This is an outrageous message. As Swinburn and every other medical professional in the world will tell you, at best, junk food should be treat food.

But KFC advertises away like there’s no tomorrow. It’s not an accident. Car companies do the same, and for the same reason: for them, there is a risk there actually will be no tomorrow.

KFC wants to embed its chicken in our hearts, literally, so there can be no social licence for taxation or regulation. Car companies really don’t want us thinking we should be less dependent on our cars.

And soft drink companies are desperate to stay in schools because that keeps whole families hooked.

Carrick Graham and Cameron Slater have both now been on the losing end of legal actions arising from Nicky Hager’s revelations in Dirty Politics. Meanwhile Katherine Rich and the Food and Grocery Council – despite maintaining their innocence – have chosen to settle rather than fight Hager’s revelations in court.

Do any of them even care? They’re still winning. Their lobbying has prevailed. The government is still letting them win.