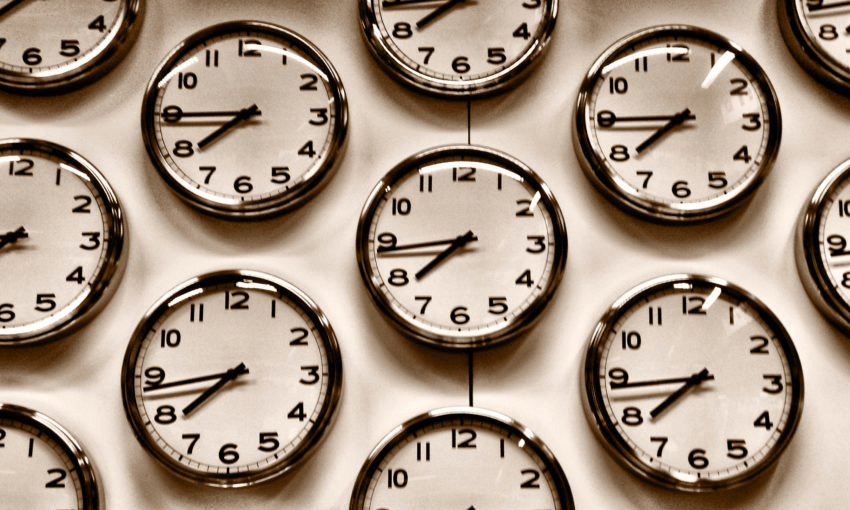 Covering Climate Now: Submit, protest, vote. These are the moments that must be seized, writes Sam McGlennon

The Spinoff’s participation is made possible thanks to Spinoff Members. Join us here!

The waves are now running together. The next month of national, regional and local politics in New Zealand will go a long way to determining the next three years of our responses to climate change. And those are undoubtedly the three most crucial years still available to us.

A year ago, the IPCC (finally) told us in no uncertain terms that humanity has until 2030 to reduce global emissions by 45% (from 2010 levels). That’s to give ourselves a reasonable chance of stabilising the climate at 1.5 degrees above pre‑industrial historical averages. One and a half degrees, in turn, is a future with some coral reefs, rather than none.

Forty-five percent reductions by 2030. Transpose that figure down to the national level, and the challenge for NZ is both breathtaking and clear. Transpose it down further and every single one of our sectors, industries and businesses, as well as each of our regions and towns, has both serious homework and sleepless nights ahead.

They say history turns on a dime. For those who have been watching the politics of climate change for much of the last three decades, that seems almost painfully inaccurate. But the coming weeks could change everything. It is a chance for the truism to again ring true.

Equally, like a slalom skier competing for gold, missing a single gate from here threatens to rule us out of contention. Decisions made and trajectories set now will resonate well into the future. Zero carbon by 2050 won’t happen without radical reductions by 2030 (and could be moot in its absence anyway). Radical reductions by 2030 won’t happen at all or with any control unless we use the next three years – and perhaps the next one – to flip the script on New Zealand’s relationship to emissions.

And any meaningful change over the next three years looks like it will depend an awful lot on the next month.

Through fortune or design (and I suspect more the former), the time from now until 21 October will see the peak of the first real wave of NZ’s political, policy and popular responses to climate change. We not only get to talk to our leaders directly, in both official and unofficial capacities, we also get to choose them.

At the national level, select committee hearings have now ended for the Climate Change Response (Zero Carbon) Amendment Bill, tabled in May 2019 by the Labour-Greens-NZ First government. The Zero Carbon Bill proposes to commit to a 1.5 degree future and to establish a Climate Change Commission to guide successive governments on targets and policy. In the UK, that combination has been a game-changer for both government action and emboldening conversations about what climate change demands of us.

Fifteen thousand people and organisations made written submissions on the bill, and hearings have since heard from many of those in person (watch here for submissions from Dairy NZ and Forest & Bird, among others). A month from now, on Monday 21 October, the select committee will report back to the government with its recommendations for the final shape of the legislation.

That process is now beyond the reach of the public. But another consequential climate framework is now open for submissions. Auckland Council, governing our largest city, has been busy creating the Auckland Climate Action Framework. A third of our inhabitants reside on the shores of the Waitematā and Manukau (or, you know, close enough). A comparable volume of the consumption-based emissions, which we are hearing are vital to address, also emerge from within that city’s boundaries.

Auckland Council has committed to a 40% reduction in emissions by 2040 (against a 1990 baseline), most likely still putting it on the wrong side of coral reefs. It has signed Auckland up to C40 Cities, a network of global cities committed to climate action. Its framework has been critiqued for not containing significant new policy actions over business-as-currently-usual, despite the council declaring a climate emergency. The better the feedback it gets, the more radical and effective this framework can become. Submissions close on Monday 30 September 2019.

On the streets, School Strikes 4 Climate NZ and Extinction Rebellion (XR) have been the chemical reaction releasing fresh energy, directness and hope into climate politics. Both groups have benefited from the clarity and strength of teen powerhouse, Greta Thunberg, who recently crossed the Atlantic by sailboat to attend the United Nations Climate Action Summit (on Monday 23 September 2019).

Following hot on the heels of that Summit, both groups will host their respective upcoming actions. The School Strike is hosting a nation-wide ‘intergenerational strike’ on Friday 27 September and calling on older generations to support these rangatahi. XR, which is marked by its intent to disrupt in non-violent ways, is calling people to Wellington for its ‘week of action’ starting Monday 7 October, following its rebel camp over the preceding weekend.

Taking all these opportunities together, the next month gives us our best and most vital chance to broadcast the voice of the NZ people on climate policy. We also get to choose who those leaders are.

On Saturday 12 October, 573 local and regional elections will catapault many who are currently candidates into three-year long leadership positions. Those elected will oversee and shape the climate responses of our towns, cities, districts and regions for at least the next three years (bearing in mind that some initiatives enacted during this time will persist well into the future).

What are their climate ambitions? What are their climate plans? Which mayor will take up Dave Cull‘s mantle on climate leadership? It’s never been more important to know. The candidate-comparison platform, Policy, which is operating at the local and regional level for these elections, will include a focus on candidates’ climate views and policies.

Buddhists, ever pesky with their insights, are fond of saying that now is the only moment in which one can ever act. Fortuitously, there may never have been a better moment to influence NZ’s climate directions.

The dates are real and set. What matters is that NZers step forward who understand the climate policies we need. Stealing the excellent words of an American climate activist, it doesn’t matter if you became aware of the the climate movement 10 seconds ago or 10 years ago, what matters now is that you are in.

What should we reasonably expect? Surely that the climate response frameworks nationally and for our largest city clear a pathway to achieve 45% reductions by 2030.

Also that the street protests garner deserved attention from, and make clear demands on, our current and future leaders, some of whom will then be only weeks away from election.

And perhaps especially that candidates in those elections compete on the clarity and strength of their commitment to – and bright and credible ideas for achieving – bold emissions reductions through the future policies of the governments they participate in.

Anything less than a strong proposal makes them unfit to govern us through these pivotal three years. Any less from us and we will not have spoken clearly enough, nor demanded answers to the questions that now matter.

Dr Sam McGlennon is a sustainability professional and the founder of Confluence, which provides bespoke approaches to the sustainability challenges of business and government.