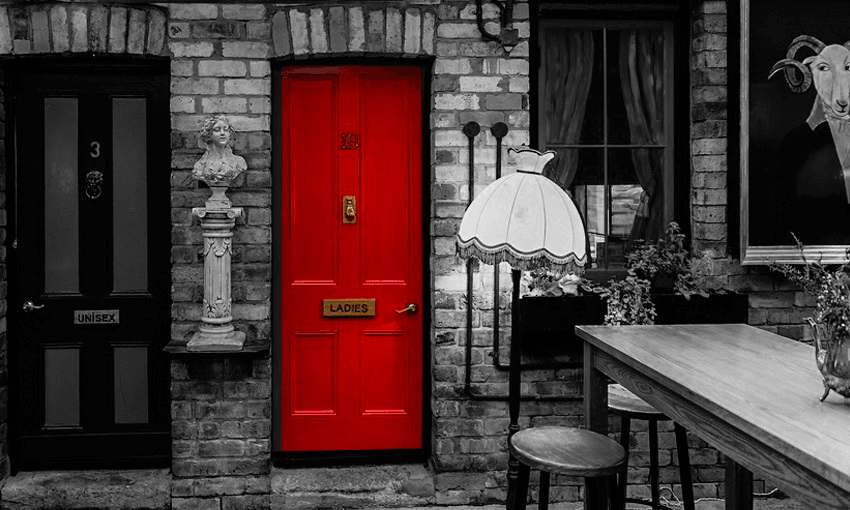 An Auckland bar attracted heat last month for hosting a US election party attended by MAGA hat-wearing Trump supporters. Three former employees have come forward to say that incident is the least of its issues.

Former staff of popular Auckland bar Hoppers have come forward with allegations about the working environment they encountered there, including an incident that led to the resignation of a staffer after complaints over serious sexual harassment by customers.

After the US election, three former employees of the bar reached out to The Spinoff to share their stories. All three say the election night party, which prompted social media users to call for a boycott of the bar, was the least of the business’s issues.

Alex*, who was employed by Hoppers for a year, said the bar has a high staff turnover, due to a “customer is always right” attitude that can impact negatively on the staff. “Hoppers was getting a reputation as a bar where you could get away with anything.”

Alex described the culture there as “upsetting and intense”.

Another former employee, Lee, said staff felt they were considered less important than customers. “[The owners] are very much customer oriented, they care about making money and I think sometimes that’s at the detriment of their staff, who should feel safe. They get a lot of complaints about staff being in bad moods and stuff like that, and I think that’s a general reflection of how they’re treated.”

All three said it was a particular incident, however, that compelled them to speak out. Reese, Lee and Alex said a staff member was sexually harassed by multiple customers on one night – “a whole table of men” – including being grabbed by the face and touched below the waist. Reese said the staff member reported it to management and security on the night in question, and either the operations manager or the owners overruled a decision to kick the offending customers out, allowing them to stay at the bar.

“They handled it incredibly poorly and that person resigned because she didn’t feel safe,” said Lee.

On being contacted by The Spinoff,  Jessica and Bronwyn Payne said they were “aware of an incident where a staff member was sexually harassed by a customer”. However, they didn’t confirm if the customer or customers in question were allowed to stay in the bar on the night after the staff member reported the harassment.

“The safety and comfort of our employees is the most important thing to us. As women in a male-dominated industry, once we heard of the incident we immediately sympathised with the employee and took action,” they said in a statement via email.

They outlined the actions taken after the incident, saying their operations manager discussed the matter with the employee. The Paynes then met with the operations manager to discuss the next steps, and after seeking input from management, they “worked to update protocols and implement further measures for the safety and wellbeing of both our employees and patrons”.

Later an all-staff meeting was called and attended by “about 15 people”, according to Reese, in which a colour coding system to address any future incidents of harassment was introduced. But Reese said the initial incident, and their handling of it at the time, was never addressed. Lee and Reese told The Spinoff that when the staff member in question raised it, she was called “childish” for revisiting the issue.

“And then they implied that sometimes the female staff might exaggerate things to gossip and have little work dramas,” Lee said.

The Paynes reject the suggestion they called the staff member childish “in relation to the complaint of harassment”.

“We took this issue very seriously and prioritised putting in place new protocol and training to help combat future issues of inappropriate customer behaviour. Further, in respect of the employee, we confirm that a position of continued employment at our alternative venue was offered to help address the concerns raised and make the employee feel more comfortable. The employee wrote to us to say they appreciated the time and effort we put into trying to resolve the issue, but overall elected to pursue other employment offers.”

Reese says another incident involved a patron being asked to leave by a manager due to having called a bouncer the n-word on a previous occasion. Reese says that when the patron and his party became confrontational, one of the bar’s owners “diffused” the situation by allowing the group to stay – and even brought them a bottle of champagne that she then shared with the table.

“I was like, ‘Oh, you guys don’t really care’,” Reese said. “Someone can come in and call a bouncer the n-word and get a bottle of champagne. A female gets grabbed by a man, don’t worry, it’s a rich white dude, he gets to stay.”

The Paynes also reject this account, saying: “The customer who made the racist remark did return at a later date. They were immediately asked to leave and did so willingly.”

In the lead-up to the US election night, the word among staff was that the partners of both Jessica and Bronwyn Payne were strong Trump supporters, said Lee, and that the election night party would encourage people to show their support for the US president, who has made unfounded claims about election fraud and has bragged about sexually assaulting women. “The reason I knew they would be taking their MAGA hats with them is because I got invited to join and I got offered a hat. And they offered one to a friend of mine too,” said Lee. Despite some claims on social media, Lee didn’t believe the party was exclusively for Trump supporters, however.

On the night of the party, a group of friends caught wind that it would be attended by people in MAGA hats and decided to enter the bar to see for themselves. A young Black Auckland woman captured altercations on video between herself and her friends, and staff and patrons, some of whom were wearing the hats, and published them on Instagram. The videos show the group being kicked out of the bar by staff.

She told The Spinoff: “It made me sad for all of my friends and family in America. To me that hat means racism, it means horror, it means violence.”

Hoppers released a statement the following day stating that the entourage the party was held for included Democrat supporters and only a “small minority of Americans that attended were Republican supporters”. They added: “Hoppers has no political agenda.”

Alex said that night in early November had her on the verge of quitting, a decision confirmed by finding Bronwyn Payne was promoting dubious Covid-19 content on her personal social media – including posts from conspiracy theorist and aspiring politician Billy Te Kahika of Advance NZ. The sisters also appeared in a post on Instagram wearing MAGA hats. This was the last straw, said Alex. “It didn’t feel very welcoming.”