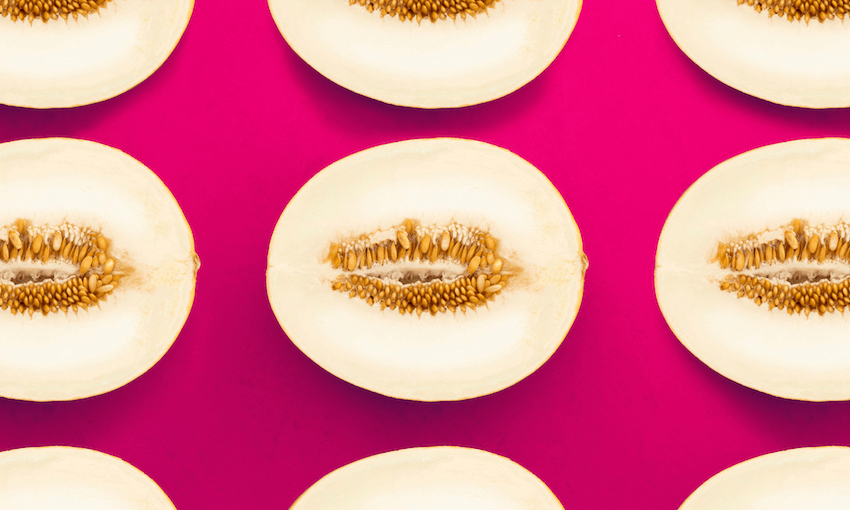 Alex Casey breaks down some of the most popular nicknames for vulvas in New Zealand.

More recently – like, literally last week – I learned that vulva-havers across New Zealand have been proudly naming their own genitals whatever the hell nicknames they want. Yes, there’s a strong argument that using cutesy nicknames might not be the best way of removing stigma and shame, but at least it’s better than pretending we are completely smooth down there like a Barbie doll. Having obtained the full list of options entered into local menstrual cup company Hello Cup’s ‘Vagina Switcheroo’ tool, where users can plug in their nickname of choice, my mind has been sufficiently blown.

New Zealand, this is your vulva roll-call

Possibly derived from the 1600s Stuart era slang of ‘tinderbox’, which was used in this 1620 ballad about a woman whose promiscuity was questioned when she married the Earl of Essex.

Geddit gurl. Cut to 2019, we’ve shortened it down to just ‘box’ and Tinder has a very different definition. Also gives new meaning to small man trapped in a box.

Marama Davidson, dat you? We all remember last year when she reclaimed the word “cunt” repeatedly at a public event, upsetting many. “I stand by using that word,” she told Newshub. “That word is a powerful word for women and shouldn’t be used as abuse.” Good cunt.

Look me in the eye and tell me you didn’t bust up on the mat as a kid when your teacher read The Faraway Tree featuring Dick AND Fanny. Okay, well, you’re lying. I’m just saying there’s a reason they were renamed Rick and Frannie. A serious blow to comedy, that.

We stan a Georgia O’Keefe legend. If high art isn’t your thing, you might remember the scene in Now and Then where Chrissy talks to her mum about sex. “All women have a garden and sometimes we need a big hose to water it… or a small hose, as long as it works.” Heteronormative yes, but a good film.

Foo, foo, do you love me? Are you riding? Say you’ll never ever leave from beside me, ’cause I want ya, and I need ya and I’m down for you always.

This one might have a lot to do with the fact that Cosmopolitan was veeeeeery fond of “hoo-ha” as a replacement term, taking a speedy 45 years to finally print the word “vagina” on the cover in 2010. You might also remember this exchange from an episode of Sex and the City:

Charlotte: “My vagina’s depressed.”
Miranda: (Asked if she’d like to order anything else at the restaurant) “Oh, I’m fine but why don’t we ask Charlotte’s hoo-ha if it’d like a side of fries?“

A classic of the genre, one that encouraged many local spinoff phrases including “pussy plunger” (covfefe), “pussy slophole” (intense) and “pussoir” (French). While we’re on the topic, have you watched PSUSY yet? You really should.

Many reckon this is all thanks to in Grey’s Anatomy when Dr. Bailey is giving birth and screams “don’t look at my vajayjay!” Fun fact: creator Shonda Rimes wanted her to say “vagina”, but the network wouldn’t allow her to use it. “At the very least,” she said in 2015, “for women who were never going to say the word, it gave them the language to talk about it.”

I don’t want or need to know anything more.

I’m really hoping this is a literary reference and not about the singer Moby.

And here’s to you, Mrs Vagason, Jesus loves you more than you will know.

The nickname equivalent of the worrisome frog at the log flume at Rainbow’s End.

This one is just dark.

Everything that enters it must die. Intense.