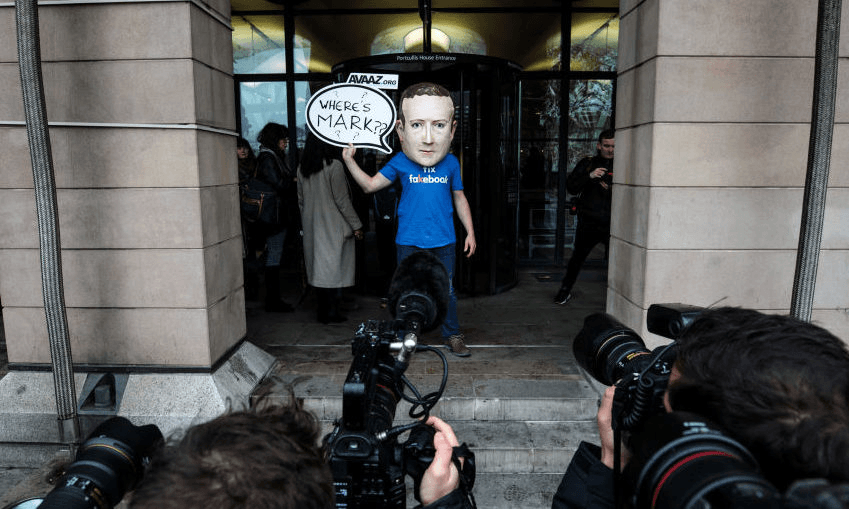 A protester wearing a model head of Facebook CEO Mark Zuckerberg outside the UK inquiry in November 2018. (Photo by Jack Taylor/Getty Images)

Mark Zuckerberg, four days on, your silence on Christchurch is deafening

A protester wearing a model head of Facebook CEO Mark Zuckerberg outside the UK inquiry in November 2018. (Photo by Jack Taylor/Getty Images)

In New Zealand we’re waiting to see if the all-powerful Facebook boss means what he says about ‘moral responsibility’, writes Toby Manhire

More than four days have passed since the world’s weakest man launched an assault that took the lives of 50 people at prayer in Christchurch. He did it with a camera stuck to his head, livestreaming it on Facebook, the world’s most powerful media company. It was taken down after police sounded the alarm. But already it had spread through Twitter – where links to the video sit untroubled still despite repeated reports. Already it had spread across Google’s YouTube platform, where the most ghoulish appetites on the planet are daily sated for profit.

But it was Facebook that broadcast it live. And for all that the world’s first genuinely megalithic media company might protest that it worked hard to scrub out this tech-dystopian freak show, the video continues to be shared on the platform today.

More than four days on, then, the $64 billion question (that’s how much Mr Zuckerberg is reportedly worth) is this: what do you have to say for yourself, Mark? Seems you’re busy, and instead have dispatched an underling to do the thoughts-and-prayers and “committed to countering hate speech and the threat of terrorism online”. Sitting here in New Zealand, that’s nowhere near good enough.

You’ve been silent, just as you were when you snubbed representatives of nine countries seeking answers on Facebook’s hazardous impact on democracy. They empty-chaired you. I hope, Mark, that you’re called to answer to the impending inquiry into what happened in Christchurch, to account for Facebook’s role as a propaganda conduit and distribution mechanism for terrorism in New Zealand. Will we have to empty-chair you, too?

Meanwhile the great Silicon Valley ¯\_(ツ)_/¯ scrolls on. Hey, come on, they say, we’re doing everything we can to tune the machines to cut out the evil stuff! The AI is nearly there! Keep the faith! Thanks all the same, but nah. Until you can sort out a system to forestall the livestreaming of mass murder, switch it off. Yes, any solution may involve employing a lot of actual human beings to make judgments. And that would be very expensive, it’s true. Also true: for the final three months of 2018 – that’s one quarter of a year – Facebook posted a profit of US $6.9 billion.

Maybe it will take a real and present threat to those billions to get your full attention. It’s beginning, and it’s fired by a visceral anger. The bosses of New Zealand’s big telecoms companies have taken you and Twitter and Google to task today. Businesses across the country, and beyond, are pulling their advertising. A groundswell of users have begun closing their accounts in disgust. The world is watching. Something is happening.

For Facebook, Google, Twitter and the rest, the Ted-talk techbro “disruptive” bullshit looks every day more like cynical camouflage for lawlessness and avarice. Facebook is not some plucky upstart, but the most powerful publisher the world has ever known, wielding an unprecedented power and influence around the world. You might like to masquerade in a hoodie and jeans, but we know who you are: you’re stupidly powerful. You’re the chair and CEO of this giant. It’s absurd.

Your chief operating officer Sheryl Sandberg, has repeatedly gushed over our prime minister. Jacinda Ardern is a shining example to women, a “prodigy”. “She’s not just leading a country,” said Sandberg. “She’s changing the game.” There was little doubt about that then; Ardern’s response to the catastrophe that has befallen New Zealand’s Muslim community, the city of Christchurch, and New Zealand as a whole, has left no doubt. Up to and including Ardern’s remarks about the role of social media delivered in parliament today – game-changing remarks which surely chilled the air, even at Facebook’s adolescently named address, 1 Hacker Way.

“There is no question that ideas and language of division and hate have existed for decades, but their form of distribution, the tools of organisation, they are new,” she said.

“We cannot simply sit back and accept that these platforms just exist and that what is said on them is not the responsibility of the place where they are published. They are the publisher. Not just the postman. There cannot be a case of all-profit, no-responsibility.”

Something is definitely happening.

You’ve acknowledged before, Mark Zuckerberg, such as in your emotional letter to your newborn daughter, that you have a “moral responsibility”. Right now you’ve said nothing. Four days on and counting, in New Zealand we’re waiting to see if you have any meaningful sense of moral responsibility at all.