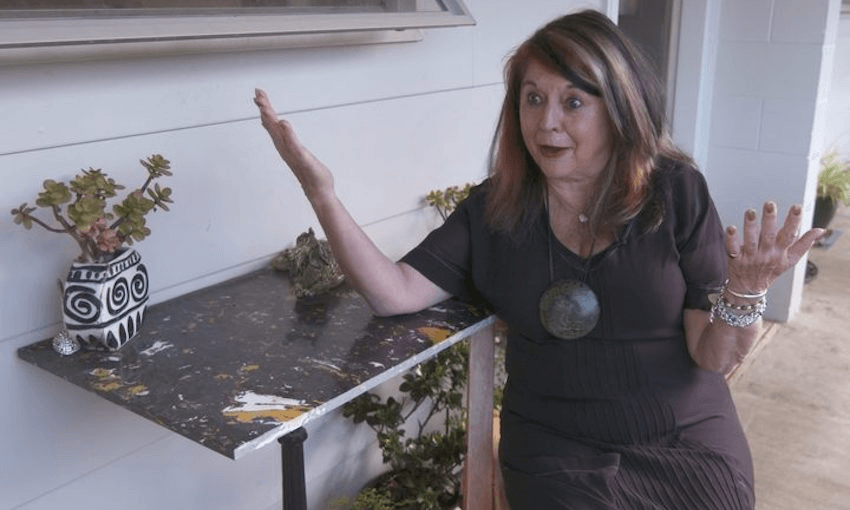 Vivienne Wright at the table in question. Photo: Screenshot / Checkpoint

Vivienne Wright at the table in question. Photo: Screenshot / Checkpoint

The minister in charge of Housing New Zealand has given the agency a dressing down after it took an Auckland pensioner to the Tenancy Tribunal twice over a small table that sits on her front porch. Zac Fleming writes for RNZ.

Vivienne Wright’s square, black faux-marble table, which her cat uses to get inside and outside, has sat next to her front door for a decade without issue. The table is the length of an average man’s forearm, from fingertips to elbow, and regardless of interpretation, in no way obstructs the walkway of the apartment block she lives in in Freeman’s Bay in Auckland. Her neighbour laughed when asked if it was an obstacle. There’s also 10 small pot plants scattered on and around it that liven up the otherwise drab, white, concrete area. Most of her neighbours have similar setups outside their homes.

But late last year, the manager of her Body Corporate, Stephen Connelly, demanded the table and plants be removed, saying they “impeded [Ms Wright’s] neighbours’ use of, and enjoyment of, the common area”. Mr Connelly believed Ms Wright, a 66-year-old pensioner with myalgic encephalomyelitis, a disease similar to chronic fatigue syndrome, was breaking body corporate rule 26 – “An owner must not store or leave anything on the common property”.

Housing New Zealand (HNZ) then threatened Ms Wright with eviction if she didn’t remove her table and pot plants.

“I got an in breach of tenancy notification and I seriously nearly had a heart attack, I mean Jesus,” Ms Wright said. The first Tenancy Tribunal hearing, in December last year, was cut and dry. The adjudicator was critical of Housing New Zealand, saying it supplied no evidence, and she had concerns HNZ had not made “any independent inquiries as to its tenant’s rights”.

“She was sitting there going, what am I not getting? Why is this case before me? There’s something else going on here,” said Tze Ming Mok, Vivienne’s neighbour, who attended the hearing and took notes. The adjudicator offered HNZ the chance to withdraw, but it chose to try again, accepting a half-day hearing three months later in February. That second hearing was just as cut and dry as the first – the adjudicator again said HNZ provided no evidence of any wrongdoing: “If the rule was enforced as Housing New Zealand would have me accept, even a front door mat would not be allowed.

“I see no reason why Ms Wright should remove her small table,” the adjudicator said.

Minister for Housing Phil Twyford declined to be interviewed saying it would be inappropriate to comment on operational matters, but he spoke with Ms Wright privately. “He did say that he found the actions against us by Housing New Zealand were petty and vindictive, and he said his vision for HNZ as a landlord was to be responsive and compassionate. And to treat its tenants with dignity,” Ms Wright said. “He was quite horrified.”

Mr Twyford said he “is happy” with that account of their conversation, adding in a statement: “I am confident Housing NZ chief executive Andrew McKenzie fully understands the need for the organisation to be a compassionate landlord for its tenants who are some of New Zealand’s most vulnerable people.”

Mr McKenzie declined to be interviewed, but in a statement an HNZ spokesperson said it had no choice but to take Ms Wright to the Tribunal. “As both unit owner and landlord, Housing New Zealand has obligations to our tenants and the Body Corporate and sometimes these can be unclear or even potentially clash,” a spokesperson said. “Given there were conflicting views, the sensible place to do this was via the Tenancy Tribunal as its decision on this matter would be clear to all parties involved, particularly the Body Corporate.

“We are happy with the Tenancy Tribunal’s decision. We think it makes sense.”

But Ms Wright and her neighbours question why Housing New Zealand didn’t “stick up for” her and dispute Mr Connelly’s demands privately instead of taking her to the Tenancy Tribunal. Ms Mok said HNZ should use Ms Wright’s case as a learning tool, given many of Auckland’s new housing developments are terraced apartments where there’ll be a mix of private and Housing New Zealand tenants – like where Ms Wright lives. “At the moment, Housing New Zealand is their only representative on the Body Corp, but they’re not representing them at all. There’s no system in place for them to consult with tenants to bring their concerns forward,” Ms Mok said. “They’re really only acting as a punitive master telling them where they’re doing things wrong and dragging them to a tribunal over the most trivial nonsense.”

Ms Wright said she has asked Mr Twyford’s office if HNZ can pay for her legal bills – $2485 plus GST – as well as an apology, and an assurance lessons will be learned. “It was seven-and-a-half months of feeling dispossessed, feeling persecuted,” Ms Wright said. “There’s a culture within Housing New Zealand that bears looking at, bears scrutiny, because it should be protecting, supporting, empowering its communities of tenants, rather than treating them like second class citizens.