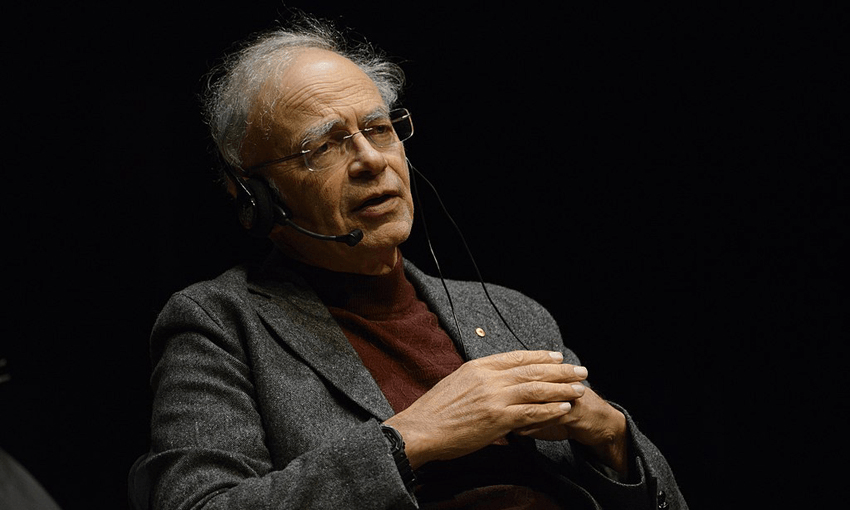 Peter Singer in 2012 (Photo: Fronteiras do Pensamento via Flickr)

On Peter Singer and cancellation

Peter Singer in 2012 (Photo: Fronteiras do Pensamento via Flickr)
Opinion

SkyCity yesterday pulled the plug on hosting philosopher and academic Peter Singer’s event after disability rights advocates expressed strong objections to his views. They’re right to be angry with him, but he nevertheless deserves to be heard, argues Danyl Mclauchlan.

A thoughtful piece on The Spinoff yesterday explored the disabled community’s reaction to moral philosopher Peter Singer upcoming visit to New Zealand. Singer has, among other things, argued for the rights of parents to euthanise newly-born children with severe disabilities.

I’m not here to defend Singer, exactly, because on this issue I think disability rights advocates are mostly in the right and Singer is mostly in the wrong. The disabled community has a right to be angry with him.

But in light of the reaction to his visit, Singer’s event in New Zealand has been cancelled because the host, SkyCity fears “reputational damage”. So I want to push back against this result and any perception that Singer belongs in the same category as the far-right activists Stefan Molyneux and Lauren Southern. And I want to try and make the case that Singer is a category of thinker we should pay attention to and whose ideas we should consider, even though we disagree with some of them, and that he’s definitely not someone who should have been cancelled (literally or figuratively).

Firstly, Singer is not a YouTube grifter or internet villain. He’s a professor of philosophy at Princeton. He donates 40% of his income to charity. He wasn’t coming here to talk about disability; instead, he was coming here to promote his book about charitable giving, poverty and inequality. And the most immediate result of the cancellation of his event is less fundraising for Room to Read, a non-profit supporting literacy and girl’s education in Africa and Asia, which seems like a not-great victory for progressive values.

Singer is often cited as the world’s most influential living philosopher. He’s primarily known for two arguments: that the lives of animals have moral worth and should be protected by a framework of rights, and that the residents of wealthy, rich countries have a moral obligation to help people living in absolute poverty. Both of these ideas seemed radical and bizarre when Singer first proposed them and are widely (although not universally) accepted now.

Singer is also the world’s most controversial philosopher, and he definitely goes out of his way to make people angry and provoke a gut response. It’s deliberate. We’re supposed to get mad at him, and then, when we try to articulate why we’re angry he picks apart the ideas and arguments levelled against him, revealing that our intuitions are not very well thought through and that we don’t actually know as much about morality and right-and-wrong as we think we do.

His famous “drowning child” thought experiment is a classic example of the technique. Do you save the child drowning in a muddy puddle, even though you get your clothes dirty? Of course you do, because you’re a good person, right? Does that mean that next time you go to buy new clothes you’ll instead give the money to a charity providing health care to children living in absolute poverty in Sub-Saharan Africa, thus saving a life? Probably not. But why not? Maybe, Singer suggests, we’re not as moral as we think we are. We have these powerful, intuitive responses to moral questions, but don’t actually live by the logic of those responses.

His argument about neonatal euthanasia follows a similar structure. Should the parents of a child with severe disabilities be allowed to euthanise the infant? Of course not, we reply. The entire idea is monstrous. It’s murder. It’s eugenics. It’s literally the sort of thing the Nazis used to do. So, Singer replies, does that mean we should oppose the abortion of severely disabled children? After all, this happens every day. Some people oppose this, but most don’t or don’t even think about it, because that feels different, somehow. But how is it different? Does the act of birth change the moral status of a baby? Why? What are the properties that endow a being with moral status? On what basis do we endow beings with a right to life?

There are various answers to these questions from different religious thinkers, philosophers and disability rights activists, and there are powerful critiques of Singer’s position. But most of us start out in a state of high moral certainty (“Singer is wrong!”) then quickly find that we don’t know the answers to those questions and that his arguments are harder to respond to than we think they should be. That lurch into uncertainty is the condition Singer repeatedly provokes. He is fond of quoting his Princeton colleague, the philosopher Kwame Anthony Appiah: “My philosophy is that things are always more complicated than you think they are.”

But I’m very persuaded by the meta-argument that disability advocates make here, which is that there’s a difference between challenging conventional wisdom – as Singer does with his ideas about animal suffering and altruism – and his arguments around neonatal euthanasia,which normalise stigma towards the disabled community. There’s a difference between using Socratic method to challenge our social assumptions and exploiting vulnerable, marginalised and historically oppressed communities to make edgy controversial statements, with Singer way over the wrong side of this difference. He’s not the first, won’t be the last, and I think public intellectuals in general should be a little less clever and a lot more compassionate.

So what are we supposed to do with thinkers that seem right about some things but wrong about others? Our culture seems to be getting worse at coping with this problem. When it comes to artists and intellectuals we’re supposed to either love someone or hate them, and to do so in a state of very high moral certainty. I think this is a problem because thinkers who genuinely challenge conventional wisdom and the status quo are going to be wrong a lot of the time, and even their good ideas are going to generate a lot of uncertainty. If we ignore them because they’ve been cancelled for being wrong about something else we diminish our ability both to change our own minds and change things for the better.

Singer is a canonical example of a thinker we need to listen to because he’s been right before when almost everyone else said he was wrong. This doesn’t mean he’s right about disability and doesn’t mean he’ll be right in the future. But it does mean we should listen to him and think about what he says instead of simply cheering him on or shouting him down.

Singer isn’t a “martyr of freedom of speech” here. His speech rights are fine: he still has a very big platform to promote his ideas. I think disability activists were right to protest his statements, the media was right to cover it, and SkyCity has the right to decide who speaks at their venue and to “protect their brand”. But the net result of all these decisions is that the most famous philosopher in the world may not get to give a talk promoting his book on charitable giving on behalf of a literacy programme. It’s probably not the outcome most people involved in that sequence of decisions wanted, but sometimes, things are more complicated than they seem.