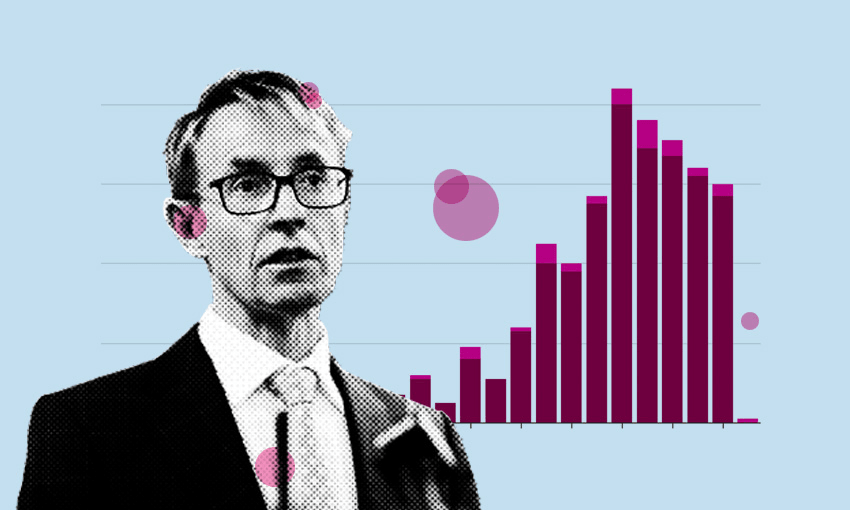 The latest in our series of charts, graphics and data visualisations by Chris McDowall. David Garcia helped create today’s charts.

These posts collate the most recent statistics and present them as charts and maps. The Ministry of Health typically publishes data updates in the early afternoon, which describe the situation at 9am on the day of release. These data visualisations are interactive – use your mouse or thumb to hover over each graph for more detail.

Note for users of The Spinoff app: if the charts below are not appearing, please update your app to the latest version.

This afternoon’s Ministry of Health figures report that the total number of confirmed and probable Covid-19 cases stands at 1,440 (1,105 confirmed and 335 probable). A total of 974 people have recovered, an increase of 62 since yesterday. There were seven new confirmed cases reported in the last 24 hours and two new probable cases. No new deaths were reported overnight.

The number of significant clusters with 10 or more cases remains at 16. There are 14 people in hospital which is four fewer than yesterday. There are three people in intensive care units, one each in Middlemore, Dunedin and North Shore hospitals. Two of these patients are in a critical condition.

For the sixth day, Ministry of Health statistics show more recovered than active cases. The number of active cases dropped again, from 507 to 454 this morning. The overall downward trend of active case counts that started around April 8 continues.

A couple of people have written asking if I could add the number of deaths to the active/recovered stacked bar chart. I have created several versions of the chart that included these statistics. However, the number of deaths relative to the number of active and recovered cases is so small that they are all but invisible to the eye. Showing them this way felt disrespectful — like I was diminishing their meaning but displaying them so small. Instead I included a dedicated summary of the number of deaths as text at the bottom of each chart.

Today I wanted to do a little more. This table lists every person we know of whose death was related to Covid-19. It is a reminder that the virus is particularly dangerous to older people. Note also how none of these deaths occurred in the three districts with the largest population. The West Coast death is one of just five recorded cases in that DHB. Be kind and careful, people.

The symbol map shows confirmed and probable Covid-19 cases arranged by district health board. In keeping with the relatively small number of new cases, there is minimal change in regional counts. Southern (no change 216), Waitematā (up one to 212), Auckland (no change at 185) and Waikato (up one to 185) remain the four district health boards with the largest number of active cases. Canterbury recorded the largest increase with an increase of three cases overnight to 153.

There are 16 significant clusters under investigation by the Ministry of Health, the same as yesterday. Just one cluster grew overnight. One of the Auckland aged residential care facility clusters increased by one cases to 25. This is the smallest increase since the ministry of health started reporting on clusters.

The same broad trend that we see in the other charts is evident here. There is a downward trend in the number of cases.