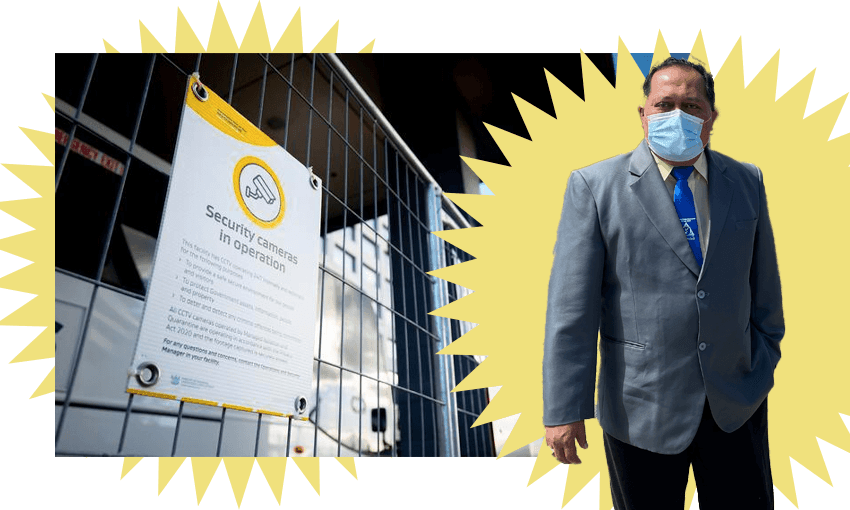 With cases of omicron accelerating at an alarming rate, one South Auckland reverend is calling on fellow ministers to put their hands up to help those needing to self-isolate.

As you drive around Māngere, a defining feature is the number of large churches. But what is also clear is that it’s a suburb chocker with sleep-outs, converted garages and portable cabins – a clear indicator of a community struggling with an under-supply of affordable housing.

But as Reverend Victor Pouesi says, churches like his EFKS congregation in Māngere East are uniquely equipped to be of use at a time like this.

Pouesi, who has just come out of self-isolation himself, has been supporting 14 boys who are recuperating inside his church’s large hall after catching omicron.

The boys, whose families all attend the church, had just returned from the Soundsplash festival in late January to the news that their households were isolating due to being close contacts of a Covid case. The boys were initially asked to stay in the hall to avoid catching the virus, but it was soon discovered most of the group had actually become infected with Covid at the Hamilton event and would need to stay locked down until they also returned negative tests.

Pouesi says this situation has highlighted how valuable churches can be when the region is heaving under an avalanche of omicron cases.

“There are so many churches in South Auckland, but they have been pretty much locked down [due to attendance restrictions for church services] so we might as well use them in this way.”

He says his church has relatively new facilities, including a kitchen and recreation space, making it ideal for the isolating young men in their late teens and 20s. Along with health and wellbeing checks being carried out by South Seas Healthcare staff, the minister also checks in with the boys every night.

“Every night we hold our evening prayer service to encourage them and make sure they are doing OK mentally. And given they are all friends, they’ve been saying that even though they tested positive, they have enjoyed being able to support each other.”

Pouesi, who has also just recovered from his own brush with Covid, says almost his entire congregation of 90 families are currently self-isolating.

“I got a runny nose and lost my sense of smell, but apart from that, I haven’t had any serious symptoms, and most of the church members said the same thing. We haven’t really been affected, as we are all vaccinated, and most have had the booster.”

This is the second outbreak the church has had to deal with since the pandemic began, as they had to self-isolate when a Covid-positive child attended the church’s neighbouring school in March 2020.

“In a way, we have learnt a very valuable lesson about the importance of complying with the Ministry of Health and working with the Pacific providers who have helped us a lot,” he says.

“I actually think the Lord has prepared us for this as we installed all the technology needed to run home services back in 2017, so we’ve been able to stay connected right through this time.”

Pouesi would like to see if his church can continue to be used as a self-isolation facility once the boys leave.

“Once our church no longer needs this, we can let South Seas use it for other communities to come here, because others may not have halls or spaces. With the help of Pacific providers, the government should use community facility halls like ours as it’s already there, and they don’t have to add anything.”

South Seas Healthcare’s community engagement coordinator Victor Va’auli says the biggest challenge in supporting families at this time is the cramped conditions many are already experiencing.

“We’re seeing many families having to isolate more than the 14 days because after their period of 14 days, they get tested again and find they are still positive, because someone else in the house just tested positive.”

The biggest family they are supporting has 16 members in the household. Va’auli says as omicron’s spread accelerates, the Ministry of Health needs to rely more on local organisations.

“Imagine you have a family of nine in a three-bedroom house – that family will allocate one room for the member that tested positive while the rest of the family will live in even more overcrowded conditions. It’s not healthy and it’s not healthy for the state of mind, so we would highly support what Rev Victor is proposing.”

In response to questions regarding the use of churches as self-isolation facilities, a Ministry of Health spokesperson said a wide range of third-party facilities can be used, “including hotels, motels, or iwi-owned facilities”, and as a last resort, “campervans will be considered … if all other options are exhausted”.

“Last year, the Mobile Community Isolation Reserve (MCIR) was established to assist regions with the provision of campervans that can be requested once a region has exhausted its alternative accommodation options.

“Prior to community transmission of the omicron variant, the number of positive Covid-19 cases and close contacts in the community required to self-isolate has been manageable, and there has been minimal demand on the MCIR service.

“[But] increasing numbers of community cases will likely result in an increase in requests for alternative accommodation.”