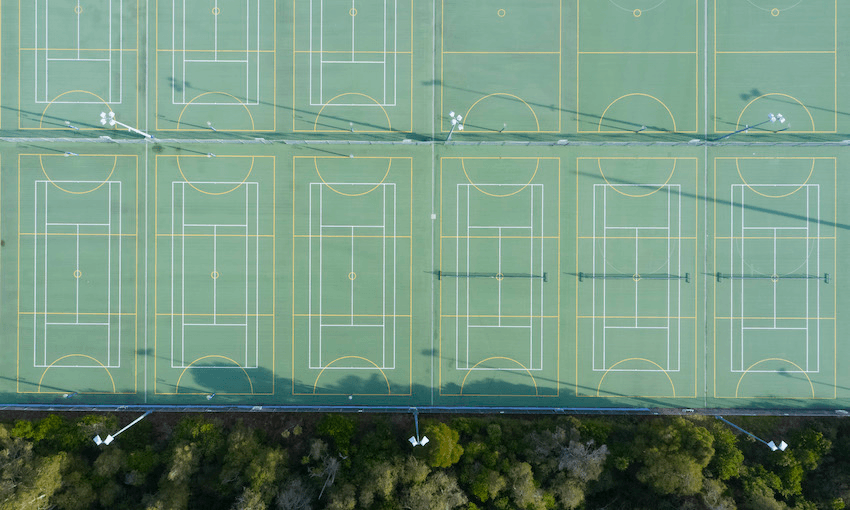 An aerial shot over empty netball and tennis courts in Auckland during lockdown (Photo: WOWstockfootage/Getty Images)

In the absence of noise, I hear things

An aerial shot over empty netball and tennis courts in Auckland during lockdown (Photo: WOWstockfootage/Getty Images)

Without the sounds of the day-to-day competing for attention, Scotty Stevenson has taken some time over the past four weeks to listen.

I heard my father talking tonight. He’s been dead seven years. His voice was deep, filled with an understated enthusiasm, imbued with eternal encouragement, just as I remembered it. I heard it while I was washing the dishes, and while my eldest son stood beside me and dried them. I heard it. It came from me.

I hear things a lot these days, in this strange reality that we have all been lumped with. Such a strange concept, reality; so singular yet undeniably collective. I hear things from nearby and I hear them from the other side of the globe. I hear the baby crying next door, and it carries me back over the years to when that sound was my own nightly soundtrack. Sound, like no other stimulus – save taste, maybe – is the great wormhole of the world. Is transportative a word like tranformative is? It should be. I hear that tiny person with the big lungs and I wonder if it’s the night for a parental meltdown or for considered, rational calm. All of us with kids have had our share of both.

In the absence of noise, I hear other things. I can walk into my house at the end of a work day (I am fortunate to still have the chance to go to work) and I can hear what’s going on. I know if there’s been a scrap over something stupid. I know if there is familial harmony. I know if dinner has been eaten – I can hear hunger breaking through if it has not. I can hear a rat in the walnut tree that grows over the neighbour’s fence. The rat is scratching at the shell. It will not give up.

I can hear things because so much else is no longer competing for attention. I can hear the difference between all kinds of silence. When children go silent instantly you know they are conspiring, or are already doing something they know they shouldn’t be. There is the sullen silence, the one that immediately follows the completely out-of-proportion rebuke. A chastened silence is painful and makes your heart ache under the pressure of regret. In my house there is a reading silence, when my boys both sit in exactly the same way – chin resting on a knee – and devour books. In that silence I hear the engines of their imagination revving. It is my favourite silence of all; it whirrs and squeaks.

I hear these things because everything is quieter for now, and you only really hear things when you’re not being shouted at. I read everything with a voice inside my head and now, in the quiet time, I hear those voices more than I used to, and when I hear them I listen to them more than I once did. Sentences that once seemed adequate now bloom with meaning that I never before discovered. I hear the delete key on the draft. I hear the internal agony of the construct. I hear the forlorn hope that someone will get what the fuck they meant.

The other night my new neighbours decided to get drunk. I didn’t hear the music (uninspiring house mixes with layers of phone-in) but I heard twenty-something me, talking too much, too loudly and with no defined point barring the need to vindicate my very existence with volume. I get paid to talk for a living. I like talking less. I am sure everyone I know likes me talking less, too.

I once ran a bar for a living, and just the other day I recalled a happening that still makes me smile. A regular patron had just taken occupancy of her usual seat for the evening when a fella wandered over and struck up a conversation. As it happened they spent most of the night sitting side by side, seemingly enjoying each other’s company. No romantic liaison (to the best of this host’s recollection) eventuated, but the next week the aforementioned regular returned and began to tell me how her companion from the previous visit never shut up.

“I could not get a word in all night,” she told me, with some frustration.

She only stayed for one that evening, and half an hour after she left, the same fella appeared at the bar and enquired as to her whereabouts. It is common knowledge in hospitality circles that one never discloses such sensitive information, even if one possessed it, and so old mate was rather crestfallen. I asked him why he looked so glum. He said, “She was the most interesting person I have ever met.”

And it stayed with me, that. And so I have taken some time to listen over the last four weeks. I have listened to my ageing body telling me to exercise, and my kids telling me to play with them without asking, and my mum being stoic but missing the hell out of her moko and my brother being all financial and shit but worrying like so many others about where all this goes.

And I listen to friends who like making jokes about struggles and I hear them. I hear them loud and clear. And I just wanted to stop listening, briefly, and tell you that I hear you.