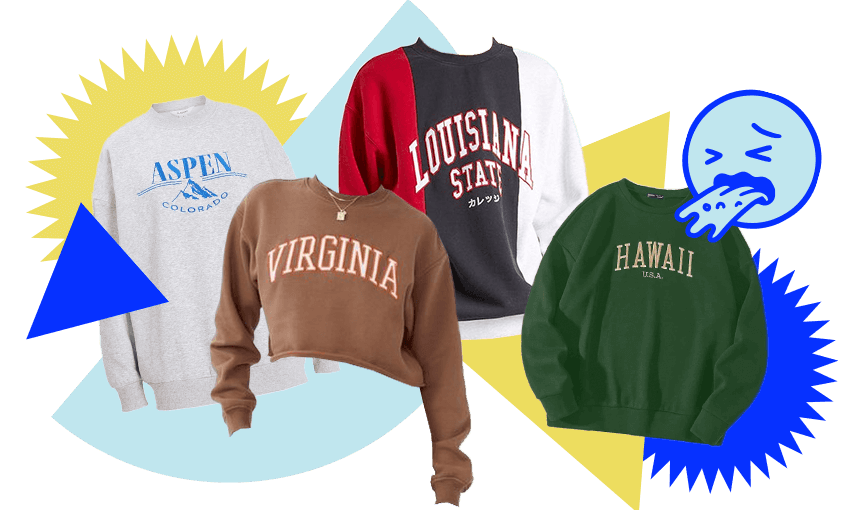 Fashion has once again gone too far, writes Madeleine Chapman.

In the attic of my childhood home, between the container of All Blacks figurines from the petrol station and the suitcase full of Christmas decorations, was a box filled with my dad’s old clothes. He mostly wore suits for work and t-shirts for DIY, but that box was a treasure trove of comfortwear. We loved going through it and trying on Dad’s old tracksuits from when he was a teenager. They seemed cool and vintage but had one major downside: they were all red and said “NEBRASKA” in big letters on the front.

My dad was born, raised and went to college in the state of Nebraska. Therefore it made a lot of sense for him to own a bunch of faded sweatshirts with NEBRASKA emblazoned across the chest. As his children, in Wellington, it made a little less sense, but we liked wearing them anyway, even though Nebraska wasn’t a place that anyone in New Zealand ever thought of, let alone wanted to represent. It was like wearing a gift from the past.

Whenever I went to school fairs, I would look out for similar sweatshirts, knowing that whoever donated the “Hard Rock Cafe: Chicago” top (which I paid 50 cents for and wore for ten years) had presumably been to Chicago and bought the overpriced merch from the Hard Rock Cafe. It wasn’t a very cool thing for me to wear at the time, but at least it felt like there was some sort of connection to the actual place.

Now I can’t set foot outside my house without seeing sweatshirts with random US place names, all brand new and featuring colours that aren’t even associated with the places they purport to represent. What is going on?

Glassons, Hallensteins, Cotton On – fast fashion brands are flooded with cheap sweatshirts bearing the names of random US states, cities and towns. They make no sense! I’ve even seen one with “Lincoln, Nebraska” on it. Lincoln is where my dad is from, and is quite literally considered one of the least exciting places in America, maybe the world. The shirt was black and blue – colours that don’t have anything to do with Lincoln, Nebraska.

It makes me short-circuit thinking about a random New Zealander paying money for that shirt and then wearing it in public. It’s like if you went to San Francisco and saw a local wearing a green and yellow sweatshirt with “Greymouth, New Zealand” in big lettering on it. Except that would actually be cooler because of how niche it is. America is not niche. America isn’t even cool at this point.

New Zealand has never really had a culture of wearing place names on our chests. School leavers might wear school hoodies while pottering around the house, and recent graduates may wear a university hoodie while out for a winter walk, but typically we don’t wear our pride in the places we’re from.

Americans, on the other hand, do little else. Flags on their lawns, town merch in virtually every store – they are their own biggest fans. When I spent time in Oklahoma a few years ago, I estimated that one in every three people I saw in public was wearing something with the word “Oklahoma” on it. They love their cities!

If we’re so desperate to wear place names on sweatshirts all of a sudden, why not our own? I want to see people walking around Auckland with “LEVIN” sweatshirts, “INVERCARGILL” sweatshirts, “KAIKOHE” sweatshirts. In the early 2000s, Huffer released a sweatshirt with “TOKOROA HIGH” on it. That’s a little too specific, though I’m sure it sold well. Random New Zealand place names is the sweet spot, and I can guarantee most people won’t notice, because that’s the point. They’re basic.

If we’re going to be basic, let’s at least make it local. Let’s get rid of fake US place name sweatshirts once and for all.

This is part of The Spinoff’s “Hear me out” series. Read more of our 100% correct opinions here.