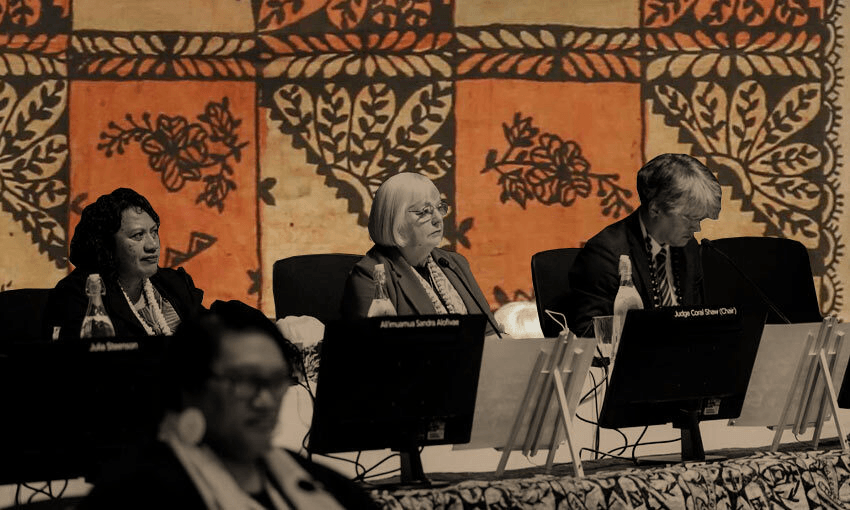 Over the past week the royal commission of inquiry into abuse in care has been holding a series of public hearings focused on the experiences of Pacific peoples. Justin Latif reports from the Māngere hearing.

Inside the beautiful Fale O Sāmoa on Māngere’s Bader Drive, people mingle under muted amber lights, talking in hushed tones. Grand wooden pillars adorned by finely woven flax rise above the gathering. It’s the fourth day of the Pacific investigation hearings, part of the royal commission of inquiry into abuse in care, and there is a heavy air of anticipation in the room.

These public hearings, which will run to the end of this week, are focused on the experiences of Pacific peoples across state and faith-based care settings.

The day’s first witness takes her seat, and the bright morning light breaks into the room from a side window, illuminating Tupe Solomon-Tanoa’i’s face as she explains that she will present on behalf of her father, Arthur Gus Solomon, given his Parkinson’s condition.

A warm calm has settled in the room, but the serenity is quickly broken by the stark nature of what is shared.

‘Hammered one another to virtually pulp’

The witness statements of the past week have described a range of violence.

Violent rapes, violent humiliation and violent physical and emotional abuse against Pacific people who had come to New Zealand looking for, as one survivor said, a “land of milk and honey”.

Solomon’s evidence was no different.

His daughter detailed his experience as a watchman working at the now-closed Ōwairaka Boys Home in 1970, which predominantly housed Māori and Pacific boys who had been referred by social welfare services.

One of the most confronting pieces of evidence shared about the home was the Sunday afternoon boxing bouts. The children were pitted against each other, forced to fight until they had “hammered one another to virtually pulp”. At the time New Zealand was still considered a Christian nation, and it’s jarring to realise the state-funded home’s Sabbath-day ritual was young people brutalising each other for the staff’s viewing pleasure.

These experiences scarred Solomon so deeply that he not only quit his job, but never talked about what he saw with anyone, including his family, until only very recently. But as his daughter explained at the hearing, it was also a spur for her father to found the Martin Hautus Institute, a Pacific peoples’ educational centre with a particular focus on helping Pacific and Māori learners who were failing in mainstream schooling. In recognition of this work, he was awarded, along with his wife, the New Zealand Order of Merit in 2015 for services to education and the Pacific community.

The final witness to present on the day was William Wilson, a former student of Wesley College, a Methodist boarding school in South Auckland. He described the ongoing physical abuse he received from prefects and senior students there in the 1990s.

He said that on the night of his worst beating things might have been even worse if not for the intervention of a pair of All Blacks.

The incident took place after a school prefect mistakenly thought Wilson had insulted him. The prefect organised for five others to kick and punch Wilson for over two hours as part of a practice known at the school as an “island respect hiding”.

Coincidentally, the All Blacks were visiting the school later that evening for a chapel service, and according to Wilson, it was Bernie McCahill and Va’aiga Tuigamala who spotted Wilson’s dire state as he was being surreptitiously escorted out of the chapel by the prefects. The two players called out to Wilson, causing his abusers to flee, and then the pair took Wilson to the sick bay, where it was revealed he had suffered major injuries, including cracked ribs.

Wilson said he will never forget the kindness shown by the rugby stars on one of the darkest nights of his life.

“Bernie McCahill and Inga Tuigamala helped me that day. They carried me into the sick bay, and when they lifted up my shirt, I had yellow, green, black and blue bruises all over my body, and my face and eyes were bloated. It took almost two months to heal.”

The abuse Wilson suffered at Wesley College was just one part of the evidence he presented at the hearings. In his written statement, he also revealed that he had been raped as a nine-year-old, and then put into a health camp for overweight children for almost an entire year, where he was bullied by both staff and fellow children.

He says one of the hardest experiences of his life was finding out he was Sāmoan at age 12. This was because “Mum’s family did not like that Mum had been with a Sāmoan” so he was raised to believe he was Māori. But just before he arrived at Wesley College to enrol, his mother told him that the school was for Pacific Islanders and that he was Sāmoan.

“I didn’t want to believe her.”

The 43-year-old said the resulting physical and emotional abuse he suffered at the school made him resent his own ethnicity. He wasn’t able to come to terms with his background until much later in life, when his foster parents encouraged to accept who he was, and also forgive his mother for the mistakes she had made in raising him.

He said he had lived most of his life in fear of what might happen if he ever spoke out about the abuse he suffered, but he was thankful for the opportunity offered by the royal commission.

“Prior to my statement this week I’ve been feeling anxious and concerned because of the threats made to me in the past. But the main comfort for me was being able to speak out and being heard and I do hope [others] speak out after this as well.”

He said his ideal outcome would be for Wesley College to acknowledge the abuse he and many others had suffered at the school.

“I know right now it’s not as bad as when I was there, and I know the new principal has changed some things, but I’d still like the apology. I’d like it to be publicly made, acknowledging what happened to me, that’d be awesome.”

In his final statements, Wilson articulated what many in attendance have thought throughout the hearings: that abuse like this should have had “no place in New Zealand”. By speaking up, he said, he hoped to give others courage to do the same.

The Tulou Our Pacific Voice: Tatale a Pulonga hearings will continue until July 30. They are open to the public and can also be viewed via live stream here.