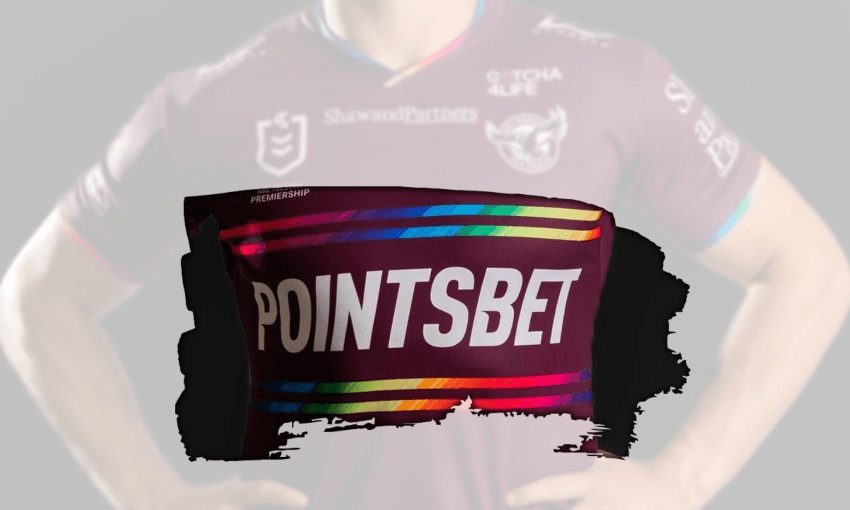 It’s called gambling and it goes against some players’ religious beliefs.

Seven Manly Sea Eagles players have boycotted the club’s new “inclusive” jersey due to its promotion of something that goes against their religious and cultural beliefs. Josh Aloiai, Jason Saab, Christian Tuipulotu, Josh Schuster, Haumole Olakau’atu, Tolutau Koula and Toafofoa Sipley refused to wear the jersey and will not play in the club’s scheduled match on Thursday.

What is causing such outrage? In large font on the front of the jerseys is an advertisement for Pointsbet, an online betting platform with the tagline “bet anytime, anywhere”. Pointsbet is the key sponsor for Manly, a decision that must surely have brought tension and complaints from the religious players on the team.

Olakau’atu is part of the Mormon church, a global religion that is crystal clear in its stance on gambling. “The Church is against all gambling of any kind, including lotteries,” reads the page titled “What is the Church’s position on gambling?” on the church’s website.

Aloiai studied pastoral care and chaplaincy in 2016 at Inspire Church, a part of the Wesleyan church. The national constitution of the Wesleyan church of NZ (2014) states: “We oppose gambling as it does not reflect Biblical stewardship and encourages the vice of greed. This includes gambling through the TAB, casinos, lotteries, online gambling outlets and similar services.”

It’s unclear what the cultural reasons for boycotting are from the remaining players but it’s assumed they simply don’t care for the known harms caused by gambling, particularly in the Pacific community.

Discussions are presumably under way to determine whether the players will boycott every home game going forward as a primary partner of the Sea Eagles – and the naming sponsor of their home stadium – is 4 Pines Brewing Company. Both Olakau’atu and Aloiai’s religions oppose the consumption and promotion of alcohol and it would go against their beliefs to play within a system that benefits the manufacturers of an immoral product.

This is only the beginning of tensions between rugby league and religion. Games against the Panthers and Sharks may also be on the chopping block for the seven players as the Penrith and Cronulla home stadiums are named Bluebet and Pointsbet respectively. In the long term, the players may even be enticed to switch to rugby union in New Zealand, where calls are increasing to ban alcohol advertising in sports.

The players have come under fire for boycotting the jersey based on religious and cultural reasons (again, the cultural reasons have not been disclosed) but this may signal a turning point in rugby league. Will accepting money to promote harmful practices and substances soon be too unpopular to maintain? Will the stand from these seven players be the catalyst for a more wholesome and family-friendly sport? Only time will tell.

In an unfortunate coincidence, the “inclusive” jersey also includes colourful piping in solidarity with a marginalised community, exactly the type of thing religions – where “love thy neighbour” is foundational – would jump to support.