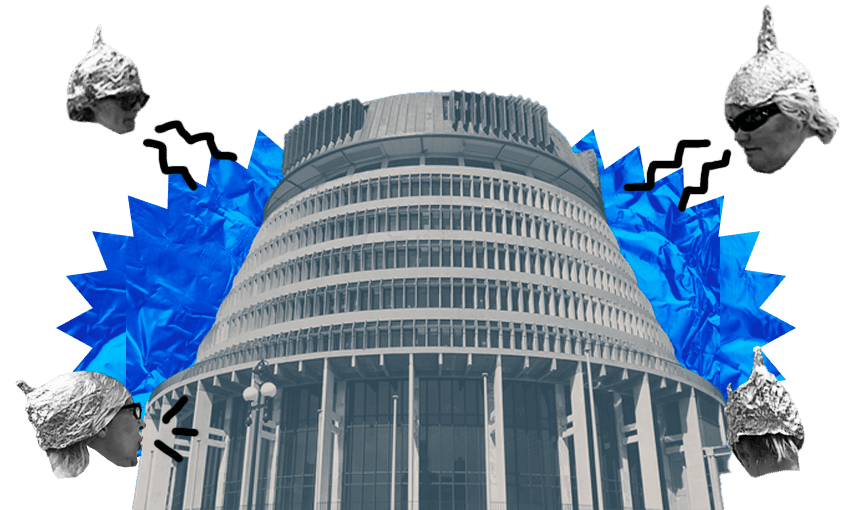 The tinfoil has been unrolled in Wellington

From 1920s sci-fi to the steps of New Zealand’s parliament: how tinfoil hats made their way to the pointy end of conspiracy theory.

It’s not clear if the women photographed in front of parliament sporting shiny foil caps were doing so in order to protect themselves from something or intended it as a joke. But nonetheless, they leaned fully into the tinfoil, and they were not alone. In online groups supportive of the protest there were discussions of the best ways to protect yourself from rumoured electromagnetic radiation, with suggestions including mylar survival blankets and good old Mono foil.

Wearing tinfoil hats has been associated with a disconnection from reality in popular culture for decades. The origin of the unconventional headwear as a pejorative indicator of conspiratorial belief appears lost to time, but a 2015 article from Vice pointed to a 1927 story, ‘The Tissue-Culture King’, by Julian Huxly as being the likely source, wherein a character uses a “cap of metal foil” to prevent the effect of telepathic powers.

That pejorative use was on display in Canada at the beginning of the convoy movement when prime minister Justin Trudeau denounced the protesters’ concerns as something to “go with the tinfoil hats”. As a result of his comments, some protesters started sporting foil headwear as a satirical rebuke of the comments.

Even within conspiracy theorist circles, the idea of tinfoil hats is often a shorthand for totally unbelievable or unhinged ideas.

The theoretical scientific underpinning is based around radio frequency shielding – a real effect that sees wires within data cables often surrounded by foil or mesh wrappers to limit interference from outside sources. Therefore it follows, for some people, that wrapping their heads in metal foil may prevent certain radio frequency signals from reaching their brain.

Decades ago, this was typically based on the idea that governments were using some type of targeted radio wave for actual mind control – people wore tinfoil hats, in theory, to stop the government controlling their thoughts.

The thinking in Wellington isn’t that far removed.

Many among the largely unvaccinated and entirely maskless crowd have found themselves suffering symptoms of a mysterious illness. They often report sore throats, coughing, a runny nose, headaches, muscle pain and even more. In their search for an explanation they’ve reached across the Tasman to Canberra where their Australian convoy comrades have, amazingly, had similar symptoms. Protesters there, also unmasked and unvaccinated, who have been spending days standing in the sun, deduced that their symptoms, which included “sunburn-like skin irritation”, were the result of government LRAD (long-range acoustic device) and DEW (directed energy weapon) technologies.

Despite no sign of LRADs around parliament (they are not a subtle device) and no clear idea of what a directed energy weapon would even be or how it might work, it’s clear to some that they are the most obvious culprit for these puzzling symptoms.

The paranoia about nebulous radio frequency or radiation weapons has seen people wandering around the protest area with non-specific electromagnetic field (EMF) measurement equipment looking for any potential source. In a popular video from one conspiracy theory influencer, a man used his “calibrated” device to identify something emitting from concrete blocks placed by police near parliament. “This one’s up here at 80, whatever that means, I don’t know,” said the video’s maker as they measured the suspect block before the number rose even higher.

Despite not knowing what they were measuring, or how it might be causing the effects they suggested, the protesters and their online supporters were convinced that the blocks were at least part of the government attack against them.

The measurement, in case you’re wondering, is a magnetic field. At the peak in the video the block appeared to have a magnetic field strength of about 1.2 micro tesla – about 5,000 times less than a typical fridge magnet.

Other videos of EMF measurement tools around the protest site also show wildly varying numbers, but are never accompanied by details or context. However, a protest site occupied by hundreds of people using smartphones, to stream live video to Facebook and check Telegram, is exactly the sort of place you’d expect to find a lot of radio frequency energy.

And tinfoil isn’t the only defence that protesters are willing to deploy against the assumed threat of EMF energy — a priority shipment of crystals was dispatched to the protest late last week.

On Saturday, the Ministry of Health noted it was “beginning to see people who have attended the protest at parliament, a location of interest and potential super spreader event, showing up in hospitals around the country after returning home” – the implication being they were suffering from Covid, although some might note that the ministry didn’t explicitly rule out EMF poisoning.

The whole situation is emblematic of everything that’s going on more broadly with the protests in opposition to government Covid measures.

Protesters, suspicious of “official” explanations for what’s taking place, look overseas for alternative ideas, especially those that fit with preconceived ideas of a negligent, cruel or malicious government. They then adopt those ideas, and embrace dubious science they don’t understand to jump to conclusions that better suit their suspicions. Now, with an alternative reality to explain their experience, they seek unresearched treatment and preventions because of a strong distrust of all aspects of orthodoxy.

People get sick, don’t believe that it could be Covid, find stuff on Telegram about government EMF weapons, confirm their ideas with useless measurement devices, and wrap their heads in tinfoil while scattering crystals around.