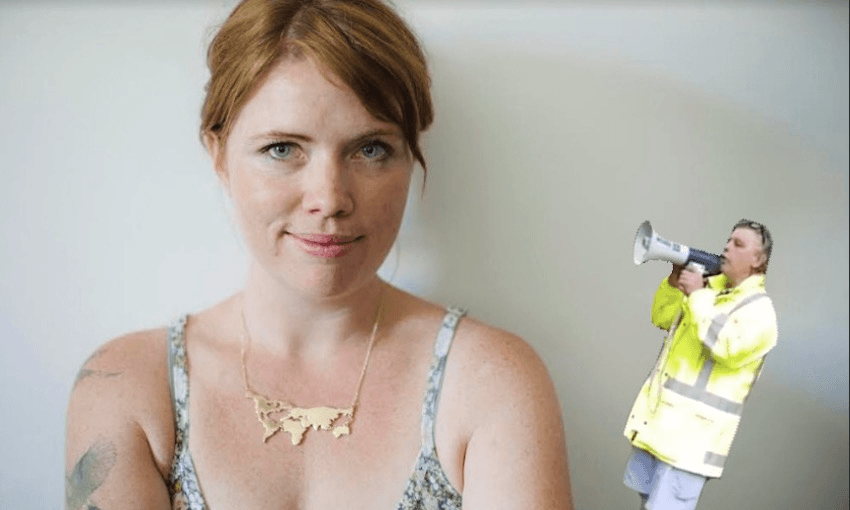 Speaking to The Spinoff’s On the Rag podcast, Clementine Ford predicted one man would turn up to protest her speaking event. What she didn’t anticipate… was four.

Last night in the Auckland suburb of Freeman’s Bay, feminist commentator Clementine Ford’s speaking event was met with a small group of angry protesters. With protest plans laid on both this Facebook page and this men’s rights website, the Boys Will Be Boys author told On the Rag that she wasn’t too concerned for her safety ahead of her talk. “They’ve organised security guards and some police … I told them they don’t need to bother, nobody is going to show up and if they do it will be one man with a sandwich board.”

Her estimations weren’t entirely far off, with the event last night attracting a crowd of four protesters, including one man in high vis touting a megaphone. In this video posted to Facebook, he can be heard hollering at the wall about Ford’s “hate speech”: “Let me tell you, closing the windows isn’t doing to do a damn thing, because I’ll just yell louder.” Not long after, the man experiences a coughing fit due to yelling. In another short clip, he can be seen shouting into the carpark, “you think it’s okay to kill men, and that all men are rapists.”

Ford is more than familiar with these accusations, which were also highlighted by the ACT party in a collage posted to their Twitter earlier this week. “It’s a collage that gets posted on everything to do with me, any event I do. Because you can joke about beating up women and raping women and all these things that actually happen to women everyday… But as soon as you joke about something that is demonstrably not a problem in the world – ie: all of the feminists rallying to kill the world’s men – it becomes deeply, deeply, serious.”

An attendee of the event, Jaclyn, told The Spinoff she arrived to find three of the men “chanting and backing each other up.” Although there were some sniggers at their protest, she also sensed a range of “sadness, frustration and anxiety” from some people as they entered. “It really shaped the forum,” she says. “I know myself and others really wanted to hear more about our power as communities to change and shift and disrupt and get better. Instead, we have to put all this time and energy talking about these men who patently aren’t listening.”

During the event, cars were plastered with flyers instructing Ford to “GET OUT OF NEW ZEALAND” and that Ford has a “significant history of inciting violence against men.” The flyer, written in several different fonts, also calls out the council for lending their venue to a misandrist who is here to “promote genocide.”

In fact here to promote her new book Boys Will Be Boys, Ford describes herself as an “uncompromising” feminist. “I am uncompromising on the fact that I want to live in a world where women and children aren’t being murdered by men.” She is frequently framed as a controversial figure, being labelled as “one of the most divisive guests” The Project has ever had. “Whether or not it’s being a feminist or fighting for civil rights… anything that challenges the status quo makes people angry,” says Ford.

Ford defines feminism as slightly more than the fight for equality between the sexes. “For me, it’s about the economic, reproductive and political liberation of all people from the patriarchy. Feminism is a movement that means I don’t have to hate myself. It’s about valuing myself in a world that tells me my body isn’t good enough, that I won’t be paid more than a man in the same field, that my only role is to become a mother. Once I become a mother, I am an idiot – and if I don’t become a mother I am selfish.”

“It’s about recognising that I have the right to stand there as an autonomous human being with dignity.”

Listen to the full episode below and subscribe to On the Rag here: