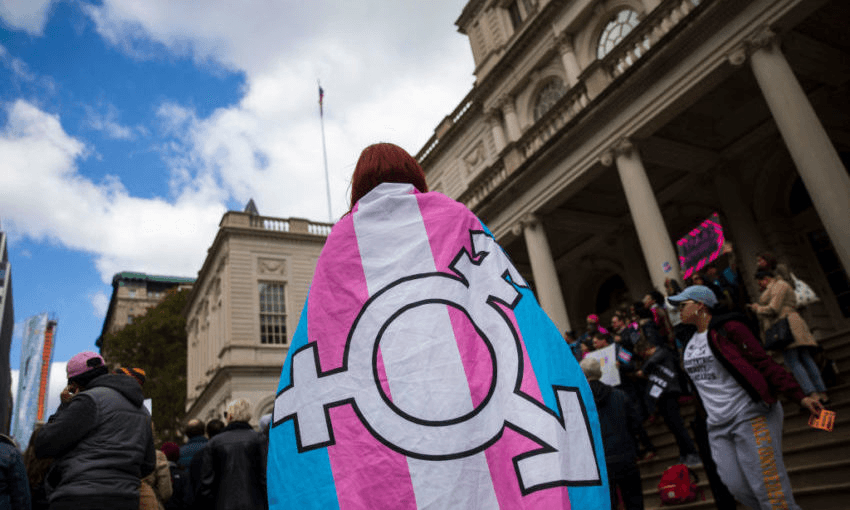 A rally in support of transgender people on the steps of New York City Hall. Photo: Getty Images

A rally in support of transgender people on the steps of New York City Hall. Photo: Getty Images

Amid the misinformation and anger, Kylie Parry, parent of two beloved transgender children, serves up the important facts. And her kids pitch in, too.

As a parent of two transgender children I try really hard not to read the opinions of people who have issues with transgender youth (and with transgender adults).  I couldn’t avoid the latest opinion piece in the NZ Herald, though. It’s amazing and a bit disheartening how much misinformation is around. So I thought I could help by explaining a few things that we’ve learnt over the past few years.

First up let’s talk medical stuff. There’s a lot of confusion about this. I was once asked by a very well-meaning person whether my daughter (who was nine at the time) has had “the operation”. What they were asking was had she undergone gender affirmation surgery. I managed to bring my eyebrows back down to their normal position and answer them. No. Nowhere in the world offers gender affirmation surgery to children. In New Zealand, if you want “the surgery” before retirement age (the waiting list is that long) you have to privately fund it overseas as an adult.

So, important fact 1: no one performs any kind of gender affirmation surgery on children.

In New Zealand the process for trans youth usually works like this: first, a GP writes a referral to a pediatric endocrinologist. The pediatric endocrinologist then assesses the young person to see whether puberty has begun. For blockers to be prescribed you have to be at Tanner Stage 2 (or further) of puberty. Once this has been established they also require a psychological assessment to make sure that puberty blockers are the best choice for that person. It’s a long slow process and in some areas can take up to a year to get the appointments and reports. Blockers are usually administered at a local health centre/GP every 10-12 weeks (and, yes, my daughter tells me the injection hurts).

So, important fact 2: you can only block puberty if your body is actually experiencing it. No pre-adolescent children get blockers.

Let’s talk hormones next. If the young person wants to go on cross hormones, so estrogen if you were AMAB (people thought their baby was a boy) or testosterone if you were AFAB (people thought their baby was a girl), then it’s more steps and more appointments. This is because unlike blockers cross hormone treatment causes some permanent changes. In New Zealand, on rare occasions cross hormones have been prescribed at 14. For most trans youth it is 16 or older. Before prescribing there are psychological assessments and upfront discussions with the endocrinologists. Not all trans youth (or adults ) are able or even want to take hormones. It’s a very personal choice.

So, important fact 3: No transgender child is given hormone treatment. Ever. It’s not a thing.

There seems to be a theory around that trans youth are caused by: the internet/YouTube, attention seeking parents, confusion over sexuality or any number of other slightly odd ideas. I can only speak for our family and our experiences. Our daughter told us that she was our daughter (not the son we had assumed) at age eight. To say we were a bit startled was an understatement. People asked us later if we’d seen it coming. We hadn’t. We researched, bought new clothes, had difficult meetings at school, made appointments. It was tough but also seeing her grow into a confident wonderful girl has made us very proud. In the early days we reminded her that at any point she could change her mind, go back. I realise now that this was a stupid thing to say. There was no back to go to. She had always been our daughter. She just hadn’t been able to tell us.

Our eldest child has had a very different journey. They came out to us as non-binary about a year ago. You’d think we’d be more onto it by now, wouldn’t you? Nope. Surprised again. They use they/them pronouns and they are a wonderful young person who also makes us proud every day.

As a family we’re not very startling really. My husband and I go to work, come home, parent, slob in front of Netflix, stuff like that. I’m a keen gardener and my husband likes to conquer empires on the computer (new civ expansion out in Feb, he’s very excited). Our daughter wants to be a scientist when she grows up and plays junior roller derby. Our eldest is at university and does a lot of volunteer work. They both love their grandparents and dislike cleaning the bathroom.

We’re not scary, or a threat. We don’t have an agenda to take over the world or scare people in toilets. We’re just a family. Our kids are just people. Like many minority groups they have to face discrimination and fear on a regular basis. I wish they didn’t have to.

Before agreeing to write this we had a discussion as a family. We all agreed this was a good idea. Our kids also wanted the opportunity to have their voices heard. So here are our kids (aren’t they great!)

Our daughter (age 12): “I wasn’t forced to be trans, it’s not like my parents decided they wanted a girl better and forced me into this. We were all born this way, we as a community have been through so much.  Nearly every individual has gone through hardship, had to fight through so many hard times and in some cases went through actual physical pain to be ourselves and there are still people saying parents are forcing us to transition, for us to change our lives. It doesn’t make sense, so just stop. “

Our eldest (age 18): “Transgender people are just people. We come from all walks of life with all number of views on the world. I wish that people would just realise that the only transgender agenda is to live a normal life and feel safe.  I think the reason we’re seeing more transgender youth coming out is because while NZ isn’t perfect, it’s a lot safer than it was. We still have so much work to do, but I am very heartened by the positive changes we’re seeing and I’m hopeful for the future.”