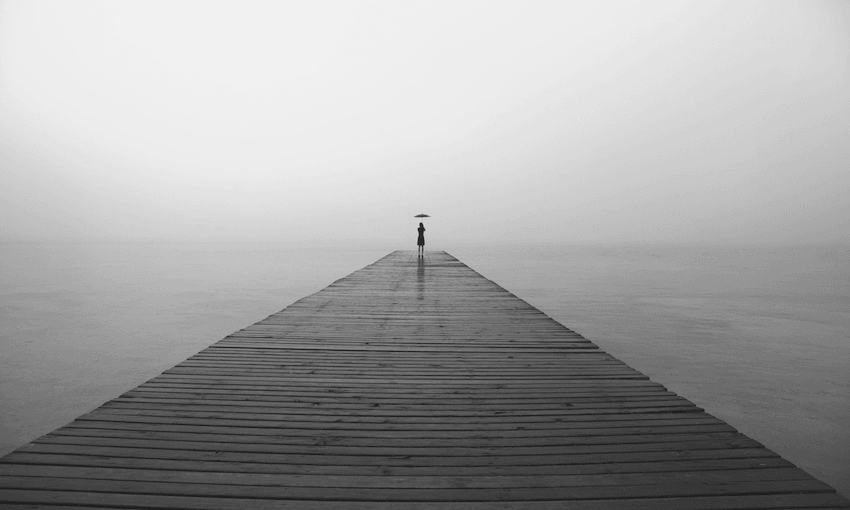 Isolation is lonely enough as it is. It’s harder when your only company is grief. Photo: Getty.

An unwanted intrusion: Grief during isolation

Isolation is lonely enough as it is. It’s harder when your only company is grief. Photo: Getty.

Grief is an unwanted guest at the best of times, none more so than when you can’t actually have guests. Sam Brooks writes about how he’s processing grief in a time of lockdown.

Lockdown is perhaps the first time in modern history where a lot of us have too much time on our hands. Some of us don’t – I pour one out for the parents and essential workers out there – but for the rest of us? We’ve time to waste, time to fritter, and time to spend. The problem is, when you’ve got too much of it, the cracks in time start to show.

Grief finds the cracks quicker than anything else, I’ve learned. Some of this grief is fresh, filling the gaps left by recent loss, be it the loss of normality or the loss of life. The former has been painfully present over the past few weeks; a virus that doesn’t spread but lingers, dormant and heavy but understood, in all of us.

On the other hand, some of this grief is, frankly, familiar. It is grief well used, even well explored. You’ve acknowledged it, you’ve held the weight, and you will carry it with you forevermore. That kind of grief is like a power bill – you’re always paying for it, but you only get your money’s worth when you actually address it, on time, without procrastination. That’s when you get the discount (pay your power bills early, friends).

Over the past few weeks, when most of the light in my house came from my screens rather than the outside world, I’ve had a lot of time to reflect on my own grief. Six years ago, my mother passed away after what was a rigged fight against cancer. Some people get uncomfortable when someone says that a loved one “lost their fight” with cancer, as though it’s an unhelpful euphemism. I don’t speak for their experience, I speak only for my mother’s. She called a spade by its name, and I give her fight the same treatment. It was rigged, she lost, and I rage against that fact every day.

Today would have been her birthday. I can guarantee she wouldn’t have celebrated it or even noted it like I am now, but for the past six years I’ve thought of the day as a time to check-in, intentionally, with grief. I invite the usually unwanted guest in, open up a wine, and trot out pleasant memories that are, by the end of the night, painful ones. Of course they are. They’re all that’s left.

But rather than waiting for the scheduled appointment, it’s actually been knocking at the window, asking to be let in. For people who grieve, people who have to grieve, it can be a common practice to think of how your lost ones – lost, as though an announcement at customer services in a mall could bring them back – would respond to certain pivotal moments and events.

Jacinda? My mother would have been an unreserved fan, singing praises and papering over failings. Netflix? No show with a horse would go unbinged in the Brooks household, except – perhaps ironically given its legitimate quality compared to most shows with horses – BoJack Horseman. Instagram? Thank god she never found it. She would be the Snow White Queen with her audience of pliable magic mirrors. A note for the living, learned from the hairs of one who has passed: Charisma can go a long way to make up for whatever misdeeds your hairdresser has inflicted upon you.

This kind of reflection, to put it kindly (fantasy, to put it less kindly) has its pleasures, but it comes with a bitter aftertaste. Every moment you spend entertaining the fantasy comes with two moments feeling the weight of its impossibility. Sometimes three. Like chocolate, or a crumpet dripping with cream, syrup, jam and butter, you wonder if the pleasure on the lips is worth the weight on, well, the soul.

I’ve spent more time than I’d like to admit thinking about how my mother would have responded to Covid-19. Often, daydreaming about how she would respond feels more present than how the actual world around me is responding; an oil-panting fantasy subbing in for a sketched reality. Certainly, she’d still be making poor taste Corona jokes, long after that one Hamilton bar had disastrously trotted them out. Geographically, she’d be better placed than most of us. In the last year of her life, my mother moved to a house that she had, more or less, designed from dirt to chimney. It was remote: the nearest horse a thirty-second stroll, the nearest human a five-minute walk, the nearest Eftpos machine a half-hour drive. Physical distancing would not be an issue for her.

She was also the kind of person who hoarded. She was always prepared for some sort of apocalypse, be it local or global. It doesn’t count as panic buying if you live your life in a constant period of low anxiety, stocking up on non-perishable cans and cask wine, with no intention to consume either unless it was, well, the actual apocalypse.

Even better and more presciently, given that our supermarkets are in no danger of running out of non-perishables or cask wine, my mother would be the person who would have brought people into her bubble at the start of alert level four. Silent sympathy and boundless kindness are like dog whistles across an empty park – the creature who needs them will always come running. My mother had both, and despite a low tolerance for stupidity and a sniper’s eye for a punchline, they were among her most well-known traits. You don’t get the nickname “Smiley” without being pleasant (or at the very least, a John le Carre character). On the other hand, I’ve ended entire friendships by casually throwing out a burn that she deployed strategically. People contain multitudes, even when they’re not there.

These reflections come easily, but they leave noisily. When I’m stirred out of wondering, whether it’s by the dull thud of the present or the distant rumble of the future, these fantasies are always less than the real thing. But they’re what I’ve got instead of her, and I’ll take a fleetingly pleasant thing to fill the gap over its endless silence.

Grief is a terrible process. It’s universal but highly specific, every loss its own shitty snowflake. I can’t imagine what the families of those people lost during this crisis are going through. A community doesn’t solve grief, but a community can lighten the load. I’ve no idea what isolation would do to the grieving soul, and my heart goes out to those who have to start on this endless journey, its own Sisyphean task with a shapeshifting rock, without people around them. The first days of grief are so important to a healthy relationship with that sudden unwanted guest and I encourage anybody who knows a grieving person, whether it’s fresh or not, to reach out. Through a screen or through the phone, you can still help lighten the load. Grief is an unwanted guest. You are not.

Statistically, I’m not the only person going through grief in lockdown. Grief doesn’t exist in the distant past. It can be achingly present, and can even be anticipatory; the loss of what could have been in the future is no less real than a loss in the past. Suddenly what was a real opportunity becomes an unbearably cumbersome pipe dream.

As Tom Waits mumbled and as Tori Amos covered: “It’s time, time, time that we love”. Time is the one thing you have for sure at the moment. While you’re cooking, self-improving or just trying to get through the goddamned day, I entreat you to set some of it aside for a coffee, a glass, or even a bottle with your grief. Don’t wait until it seeps in through the cracks. Grief can’t catch Covid-19, as much as we wish it would. It’ll be there when the lockdown ends.

Check in with it, before it checks in on you.