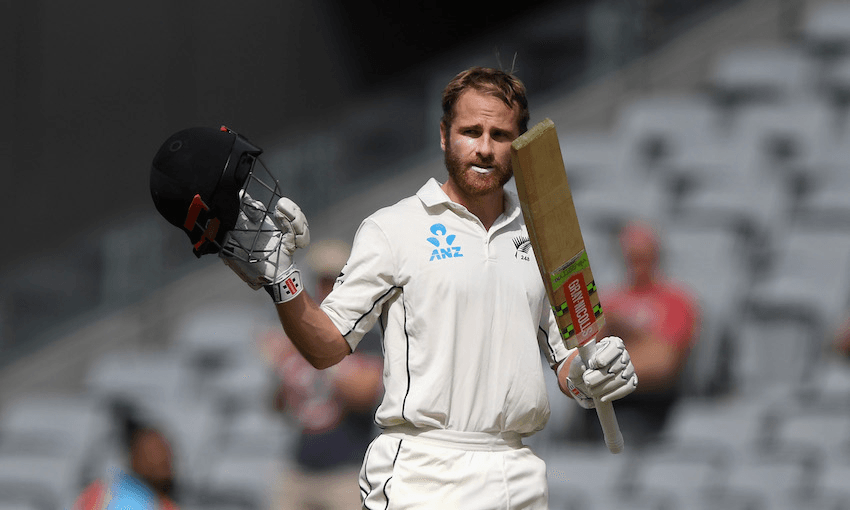 Pink Ball Diaries: Who is New Zealand’s greatest batsman of all time?

Cricket is built on statistics. It’s the backbone by which one era can be compared to another. It’s Bradman’s average, Stephen Fleming’s conversion rate, and for a very long time Martin Crowe’s 17 test centuries. So, yesterday when Kane Williamson dabbed a single through gully with the softest of hands he moved into the undisputed position of New Zealand’s best batsman ever – statistically.

Because cricket also relies on narrative. Heroic stories of lightning double centuries in the face of inevitable failure, historic triple centuries to rescue a draw against every bit of natural instinct. And it’s about how you look doing it, swivelling on one leg like a ballerina with bat, or rolling in the dirt with cramp.

So The Spinoff asked a bunch of friends and family who they think takes the title.

I think it’s hard to compare batting stars  based on stats. Kane Williamson is clearly better than Martin Crowe based on stats alone. But this tells half the story because he hasn’t had to face quite the same kind of pace bowling and the pitches seem to be generally flatter than those of Crowe’s era (he’s also, up to this point been less plagued by injury). But I still think Williamson will eventually be the unquestionable GOAT of NZ test cricket.

A more interesting thing to consider is influence. You could say that Brendan McCullum’s century in the opening game of the very first season of IPL was one of the most influential single moment in New Zealand sport’s history. The audience was huge, the stakes, financial at least, like nothing cricket had ever dreamed of.

However I think the New Zealander with biggest impact on world cricket is probably Suzi Bates. She is arguably the greatest female cricketer ever and has been a unshakeable talent for so long that I think I’d rate her at the top of the heap. There are a few batsmen who thoroughly eclipse our best men (Viv Richards, Bradman, Ponting, Lara, Sangakkara, Tendulkar…actually quite a long list) but Bates is in a league of her own within the women’s game

Nathan Astle played for a clean decade, between 96 and 06, a period which coincided with both some big, brash cricket teams and my own deep obsession with the sport. In my memory he looms as those team’s Kane Williamson – dependable, self-contained, an ATM for runs. Only, his career does not really reflect that. He had as many ducks as centuries, and his career has a touch of the Craig MacMillans about it – big scores coming along frequently enough to keep him well in the side, but not propel him to true greatness. His career average is a very ordinary 37, and he averaged over 50 in calendar year just once – during 2003, when he played only two tests. Worse, in matches we won he averaged just 34.

And yet my abiding sense of him – perhaps distorted by his much greater ODI achievements – is of calm. He was measured, precise, attempting to play the innings the team required rather than his ego demanded during an era when that was not always the case. His 222 remains the most incredible thing I’ve seen in a cricket ground, yet it was uncharacteristically savage from a player who read the stage of the game brilliantly. Mostly I remember him so fondly because when he strode to the wicket, I had hope, and belief. When he strode back, it was mostly gone.

Cricket is a game of statistics, and statistics don’t lie. Opener Rodney Ernest Redmond, with a test batting average of 81.5, is the greatest batsman New Zealand has ever seen. Others may have a higher aggregate, scored more centuries or led New Zealand to more wins, but you can’t deny that average. One test was all he needed – against Pakistan on his home ground of Eden Park in 1973.He batted without a helmet, his shirt perilously close to being fully untucked, and smashed spinner Majid Khan for five fours in an over on his way to a century in his first innings of test cricket. He showed great composure during the knock: on reaching 99, the crowd, mistakenly thinking he had reached his century, invaded the pitch with violent glee. He carried on, getting to 107, and added a tidy 56 in the second innings. Statistically, at least by average, which is the most important measure, he had become New Zealand’s greatest ever batsman. What else was there to achieve?

I’ve taken “greatest” not to mean the batsman who impresses with the imposing weight of statistical accomplishment – the Williamsons, the Crowes – but rather a batsman whose very technique gives you an imaginative conduit to your own cricketing career. If Andrew Jones can average nearly 45 against the fearsome international bowling line up of the early 90s despite never playing a shot with either feet on the ground, surely we all – despite extreme fear of anything bowled faster than a regulation off spinner – prematurely gave up on our own cricketing careers. If you can score a 150 at the WACA against Australia while never looking more in  than Chris Martin with a hangover, perhaps it’s not too late for my own mid-thirties entry into international cricketing glory. Andrew Jones allows us all to dream.

Given the events of the last couple of days it may come across like a heavy dose of recentism, but it has become increasingly evident there has been no New Zealand batsman like Kane Williamson. And it’s more than just the stats.

It is a combination of the reliability, technique and modesty. The reliability that he will score runs in all conditions and locations. On debut in India, Sharjah, Lords, Brisbane.. all over the place.

The purity of the technique which is best demonstrated by the straight drive; a statement of equal parts beauty and efficiency. And the modesty of the man. Drama free which is how we like it in Aotearoa.

Only two batters in history have scored four consecutive ODI centuries. Kumar Sangakkara and Amy Satterthwaite. That’s enough to get her on this list. To be honest, Satterthwaite can’t be New Zealand’s best batsman, not just because she’s not a batsman (come on, Spinoff). Women simply don’t play enough internationals to qualify for such honours. But if Andrew Jones can be part of the discussion, then so can Amy Satterthwaite.

So, without a doubt, the best batsman New Zealand has ever seen is Martin Crowe. He had 17 test centuries during a period of the game where competition was so much tougher than it is now. He didn’t have Bangladesh to inflate his stats and Zimbabwe was actually decent in the 90s. West Indies have also been crap for the last 20 years so more recent Black Caps have benefitted from easy scoring against them.

As for ODI batsmen, New Zealand’s had a lot of good ones but rarely are they able to consistently perform when we needed to win important games. Except Martin Crowe. His batting carried the Black Caps in the 1992 World Cup and we only lost the semi final because of our bowling (when he wasn’t even on the field).

Sorry Ross, Baz, Flem, Hogan, Glenn and Bert, but it’s Kane. It’s definitely Kane. I love his high, rhythmic backlift. I love the cover drives and straight drives that roll like a pool ball to the rope. I love the underwhelming celebrations. I love how he’s clocked T20, the format that’s in his ‘top three’. I love that he’s mates with David Warner. And I love that a kid from the laid back Tauranga suburbs has grown up to fight it out with the world’s best. My favourite innings are the 192 vs Pakistan in Sharjah, when the team was reeling from the Philip Hughes’ death, and the 242 not out v Sri Lanka at the Basin, part of a 365 run partnership with BJ Watling. It was his first double century and one I was lucky enough to be there for – I remember the deep feeling of calm, knowing Kane Had This throughout the match-saving innings, and the way he went to sign autographs for kids immediately afterwards, even though he’d just batted for about 47 hours. You’d be hard pressed to imagine a more stylish and intelligent batsmen, or a more grounded chap to lead our fantastic team. And we’ve got another ten years or so to enjoy the ride. Richard Irvine fires out a weekly sport newsletter from www.sportreview.net.nz/newsletter.

Forget that he now sells his terrible opinions for a living. Mark Richardson must top this list because he did something that nobody else has done since. He was an opening batsman who held up his god damn end. Forget averages, or career centuries, or strike rates – especially strike rates. Cricket is about doing your job. The pigheaded obstinacy that he displays on morning TV is the exact same single-minded stubbornness that allowed him to block it out forever. His utter refusal to listen to reason or evidence allowed him to overcome his severe limitations in natural talent as a cricketer. For four glorious years, Mark Richardson made certain New Zealand wouldn’t be unceremoniously rolled on the first morning of a test. For that, he deserves his place as our very best.

How a group of mates in a caravan changed NZ sport forever.
By Duncan Greive
CEO / Publisher