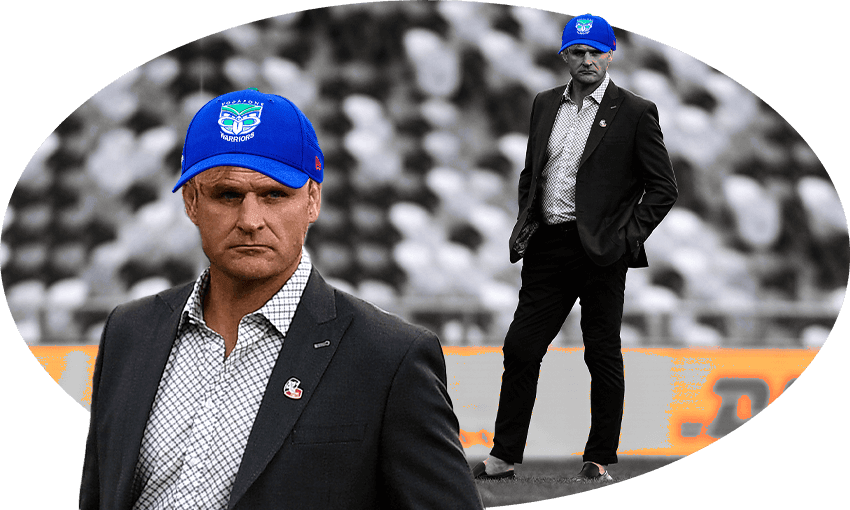 Calls are mounting for the obscenely successful Crusaders coach to be put in charge of the All Blacks. Jamie Wall has an even better idea.

On Sunday, July 3, the Warriors will finally return to Rarotonga/Mount Smart Stadium for their first game on New Zealand soil since 2019. Unfortunately, the persistent stench of failure precedes them by some weeks. This has been possibly the most trying season yet for the most long-suffering fanbase in Aotearoa (even the Hurricanes have won a title), with a dismal record of four wins and 11 losses. including a record 70-10 defeat to the Storm on ANZAC Day.

What’s happened off the field is even more depressing. Euan Aitken negotiated an early release from his contract after apparently realising playing for a team called the New Zealand Warriors would mean having to live in New Zealand at some stage. Matt Lodge had a dust up with the owner and left with a $700K payout. And coach Nathan Brown pulled the ripcord to get himself out of steering this disaster for the rest of the year. Somehow, Chanel Harris-Tavita managed to trump everybody by claiming that he doesn’t even want to play rugby league at all anymore.

Brown’s departure means club legend Stacey Jones has been handed the reins, but so far he hasn’t been able to do anything about them sitting second-last on the NRL ladder. The Little General isn’t a head coach, nor has he ever really claimed to be one. What the Warriors need is a big name in the box, but the problem – as has always been the case in the brutal NRL competition – is that there aren’t enough to go around. Craig Bellamy isn’t leaving Melbourne, Wayne Bennett is locked up in Redcliffe, Trent Robinson is perfectly happy in Bondi and, most gallingly, Ivan Cleary is never coming back from Penrith.

So do the Warriors settle for the likes of Trent Barrett, Michael Maguire or whoever else answers the job ad on Seek? They almost definitely will, but that’s inside-the-box thinking. What they need is to get outside the box and bring in someone with a proven track record of success, both in terms of winning titles and busting moves. They need to make newly minted six-time Crusaders champion coach Scott ‘Razor’ Robertson the next coach of the Warriors.

Razor coaching the Warriors solves a couple of issues straight away. With Robertson moving away from Super Rugby, every other team in that competition can breathe a sigh of relief. After all, between his playing and coaching careers he’s won over a third of all Super Rugby titles on offer. That’s more than every Australian and South African team put together.

Love them or (more likely) hate them, the Crusaders have had their time. All those titles in a row and little sign of a new stadium means Robertson needs a new challenge, and there’s no bigger challenge in New Zealand professional sport than turning around the Warriors’ fortunes. This will involve more than just simply learning how to count to six: league is a far more complex and detailed-oriented sport than many give it credit for, so Robertson would get to put his famed innovative thinking to the test.

Player recruitment has long been an issue for the Warriors. Robertson could get around the problem of convincing top Australia-based league players to move to New Zealand by bringing some of his favourites north with him. Richie Mo’unga would be right at home in the halves, Pablo Matera has potential to be a metre-eating offload king, while Will Jordan would light it up from the back.

We’re used to the idea of rugby and league players switching codes – it happens all the time. So it wouldn’t be that weird for the Warriors to do the same with their coaching staff. It wouldn’t even be the first time it’s happened: former Wallaby coach Alan Jones, who was in charge the last time Australia won at Eden Park, went on to have coaching roles at Balmain and South Sydney. Another former Wallaby coach, Michael Cheika, guided the mighty Lebanon via Zoom  to a 30-14 win over bitter rivals Malta this week. Even Sir Steve Hansen is dabbling in the 13-man code as an advisor to the Canterbury-Bankstown Bulldogs, although the way their season has been going he might need to try a bit harder.

The likelihood of this happening? Admittedly non-existent, given that if Robertson was going to be lured anywhere it’d be to some coaching gig for England or Wales after they dump so much cash on his driveway he had no option but to say yes. But seemingly the safest bet is that he simply remains in Christchurch, winning more titles with the Crusaders until NZ Rugby have no choice but to make him All Blacks coach.

But this is the life of a Warriors fan: you dare to dream. The amount of dud buys they’ve made over the years could fill a phone book, so really they’d be taking no more of a risk on Razor than the likes of Matt Lodge, Kane Evans, Ash Taylor, Jeff Robson, Jason Bukuya, Dane Neilsen, Todd Lowrie, Shaun Berrigan, Joel Moon, Denan Kemp, Ryan Shortland, Paul Dezolt, Matt Jobson, Danny Sullivan, Mark Carter and all the other blokes who phoned it in wearing at least one version of the Warriors’ many, many jerseys.

There’s still another nine rounds left in the NRL for 2022 – what’s the worst that could happen?