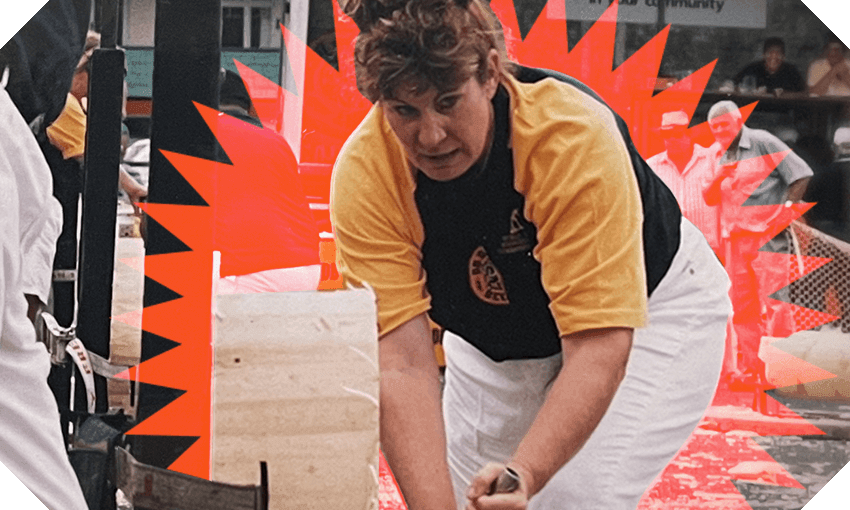 The matriarch of woodchopping in Aotearoa isn’t done yet.

As a mother of two living in Taranaki in the 1980s, Sheree Taylor spent her spare time playing top-level netball and basketball. Between time on the courts, she swam, worked out at the gym and would go on early morning runs at 5.30am. “I was really, basically, a sports addict and I just couldn’t help myself,” she says in season three of Scratched: Aotearoa’s Lost Sporting Legends.

Back then, her husband, Alistair, was a top-level axeman. He’d represented New Zealand and won world titles. During a game of netball she tore her achilles tendon and was advised by surgeons to stop playing. “I didn’t know what to do,” she says. “I thought my world had come to an end.”

One day in 1983, 38-year-old Taylor went out to Alistair’s training area in the shed at their farm. As she looked around the space, at the logs of wood and saws, she wondered to herself whether this sport that her husband was so successful in was something she could take up too.

Alone, she gave it a go and instantly fell in love. The setup was beautiful for sawing, with carpet on the floor to help with grip. One day as she practiced in secret, she heard her husband’s voice from around the corner, “If you’re going to start that sort of sport, you’re going to have to put on some more weight.”

She’d been caught in the act.

Had she not been in the shed so often, she reckons Alistair could have brushed her interest aside. But she was determined, and the pair began practicing three times daily, day and night. They started out travelling around New Zealand competing in Jack and Jill sawing at regional shows, an event which sees a woman and man on either side of the saw. That event proved to be her gateway to the sport. She’s been competing in all forms of wood chopping – whether it be axe throwing, single sawing, woodchopping or chainsawing – ever since.

As far as sports go, woodchopping has dramatically masculine associations: burly men with beards and choppy moustaches fighting their way through massive logs of wood with saws and axes. When Taylor began competing in New Zealand she was basically the only woman on the scene – it was a world dominated by men. And it was a world that was “very, very difficult to break into,” she says.

While some men, especially in Taranaki, were supportive, elsewhere in the country her experience competing could be more splintered. Often the discomfort with having a woman on the scene would be passive, manifesting as glares when she entered the chopping arena. Other times it would be more explicit. At one regional competition a man told her that he’d be pulling out of an event because she’d entered it.

“I used to feel quite bad,” she says. “I didn’t want to create any discomfort for them.”

For a while, Taylor considered withdrawing from the sport because of those encounters. But thankfully those thoughts didn’t evolve into action. “I love the sport so much, why should I let somebody else take it away from me when they’ve got the problem?” she says.

Taylor had plans beyond her own competition success anyway. Her grand aim was to create a New Zealand women’s team. “I just wanted to see girls there competing, enjoying, and I just wanted to be united to represent our country.” Overseas she’d seen that women’s teams existed. But back in New Zealand, women’s inclusion was still mostly seen as novel. But she persevered.

Taylor’s perseverance is perhaps best reflected in her first competitive entry into the women’s world championship event in America in 1995. Ahead of the competition, she trained for five months both wood chopping and sawing. Then on the plane to the US she caught Legionnaires’ disease. Leading up to the competition she was bedridden, bleeding internally and hadn’t eaten anything but half a banana over ten days. “You need vigorous bedrest,” a doctor said to her – phrasing that she’ll never forget.

Despite that, with the support of her husband she managed to get from the medic room to her log of wood and won the world championship for single sawing. When a television crew asked her what it was like to be a world champion, she could only reply with “OK”.

Winning that competition despite being barely able to stand upright “was absolutely unreal,” she says. “I didn’t realise I had such mental strength in me.” She went on to win ten world titles in total, including six single sawing competitions. Over two decades, Taylor’s endurance and passion for the sport helped to pave the way for other women to enter. She actively encouraged other women to pick up saws and give it a go. So much so that she’s been dubbed “the matriach” of woodchopping in Aotearoa.

In 2002, Taylor and her husband founded the first New Zealand women’s team – called the Axe Ferns. To honour their unique team identity, Taylor designed a logo for their uniforms featuring a saw and axe bracketed by ferns – an emblem that’s still worn on both the men’s and women’s uniforms today. That design, symbolic of the team she helped make possible, is an endless source of pride. “It’s something I will always take with me right to the very end.”

Now, the team is captained by Alma Wallace and is made up of eight women from all over Aotearoa who represent the country.

Alistair, who Taylor describes as “the backbone to my success”, died in 2019. Four months later, Taylor won women’s double sawing with her sawing partner of 13 years, Darcell Apelu, at the Sydney Easter Show.

At 67 and with five grandchildren, Taylor is the oldest female competitor in the country. But she isn’t thinking of retiring any time soon. At the moment she’s recovering from knee surgery, but she’s got plans to compete again come summer. “I’m still learning today, believe it or not,” she says. “There’s no use getting older if you can’t get wiser. You might as well pick up every hint that you can.”