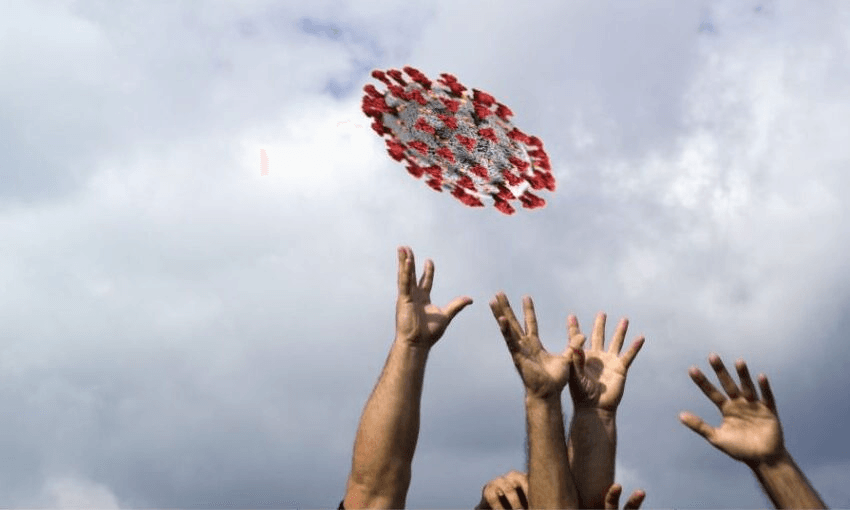 World Rugby is welcome to use this ball redesign idea free of charge.

World Rugby is welcome to use this ball redesign idea free of charge.

The brains trust at World Rugby have conjured up some optional law trials to obviate the risks of coronavirus. Scotty Stevenson is intrigued.

The World Rugby Executive Committee yesterday announced that it had “approved 10 optional law trials which are designed to provide national member unions with Covid-19 transmission risk reduction options if required”.

This is a sign of life at World Rugby HQ, which recently saw Sir Bill Beaumont reappointed chairman in the face of a challenge from Argentine Agustin Pichot, who has since claimed he lost because, well, a whole lot of promises were made and they weren’t his promises.

Be that as it may, the think tank has been bubbling away. The nerds have been press-ganged in to action, and World Rugby, the August Sporting Body of Our Time has gathered together the greatest minds in the sport’s history to come up with some new laws to go with the several hundred old laws to make rugby the sport of the post-Covid-19 world.

According to official statements, “The law trials were considered by the specialist Law Review Group (LRG) comprising coaches, players, match officials, medics and law specialists, following a detailed analysis of 60 matches. The LRG decided against mandatory global application of the law trials given the wide variation in the presentation and management of Covid-19 across nations.”

In other words, no one gives a shit because everyone is basically fighting for survival. In any case, and with Super Rugby Aotearoa already thinking about golden point initiatives to do away with pesky draws, what better time to look at what World Rugby’s great minds have come up in a bid to get back down to business.

Sanction: Free kick to team who put the ball into the original scrum.

So, create a sanction for a crime that no one committed. That makes absolutely no sense.

It’s a literal middle finger to everyone who complained when you threatened to take scrums away.

The sanction is merely the outcome you proposed before people complained, you numpties. As for the rationale. Are you kidding me? You really have plucked that number out of someone’s crack.

Law: Hookers must use “brake foot” to aid scrum stability.

So now we’ll just load up one poor fat hobbit’s quad with approximately 800 kilograms of pressure so you can prevent something you have just removed in the previous law. Great. You’ve reduced transmission risk by 30% by cracking several thousand femurs this season.

Law: No scrum option for a penalty or free kick.

Law: Goal line drop out when an attacker is held up in-goal or knocks on in-goal.

It’s as if World Rugby is simply admitting absolutely no one knows how to police a scrum. Also, Rugby League. Is Peter V’landys on this damn panel?

Law: Reinforce High Tackle Sanction Framework. (Note: this was all capitalised in the official document, showing how serious it is.)

^ I made up the Supreme Court bit.

Sanction: Choke tackle called as a tackle and teams must then present ball and play.

Rationale: Oh who cares. Removal of disease risk I assume.

Look, the choke tackle is a direct result of defences working their way around the last set of laws you changed. If they are allowed to play the ball then a whole bunch more players will try to steal it, presumably by diving into each other in the ensuing ruck.

Also, calling it a choke tackle is just making it sound dangerous, like calling a piece of Lego an “insole penetrating device” or your mum’s chocolate cake a “diabetes hazard”. Shut up already.

Law: Ruck use it duration time from five to three seconds.

Rationale: reduce close-proximity contact time at the tackle/ruck by up to 25%.

First thing: no referee in the world has ever been able to standardise a five-second “use it” call and none will be able to do it for three. But I’m all for that two-second adjustment so halfbacks can’t stand around like complete dicks while they think about a box kick. Also, this is such hair-splitting absurdism that I just … waited … two … seconds … between … typing … these … last … words.

Law: No scrum for failure to “use it” at scrum, ruck, or maul.

Rationale: While rare, players will be encouraged to use the ball quicker, reducing close-proximity at base of scrum.

Here’s the point in all this when you can tell (if you haven’t been able to before now) that the consultant hired to assemble this abomination is really starting to phone this stuff in. The Oxford comma is the first giveaway. I don’t mind it, personally, but it’s a tell tale sign that Adrian, who was a mate of Bill’s cousin, Arthur, is the true author of this omnishambles of incoherent conceptual tomfoolery.

“While rare” is another tell-tale clue. It is code for ‘we are really scratching our heads to come up with ten fresh ways to make this game suck, and this is when your four hundred quid an hour is really going to save our insolvent hides.’

Also, just ban scrums. If that’s the way you feel. We’ve been here already. You know you want to.

Law: No one can join a maul if not in at the start.

Sanction: (you guessed it) free kick.

Rationale: 60% of lineout mauls have all eight forwards involved. Capping the number who can join caps the proximity risk.

Read: Only forwards will catch Covid-19.

Law: Only one forward movement in a maul.

Sanction: Free kick. (Jesus wept. There really is nothing else, is there?)

Now they are just putting random commas into things. Adrian is on a work-from-home and has been into the Porter again. The beer, that is.

The problem with this trial law, as best I can tell, is that if you really do get your shove on, and somehow manage to turn that one forward movement into a length-of-the-field effort, you will undo all the “close-proximity reduction” work of every other trial law combined. Which is a spectacular own-goal.

Or at least it would be, if this were as simple to follow as football.