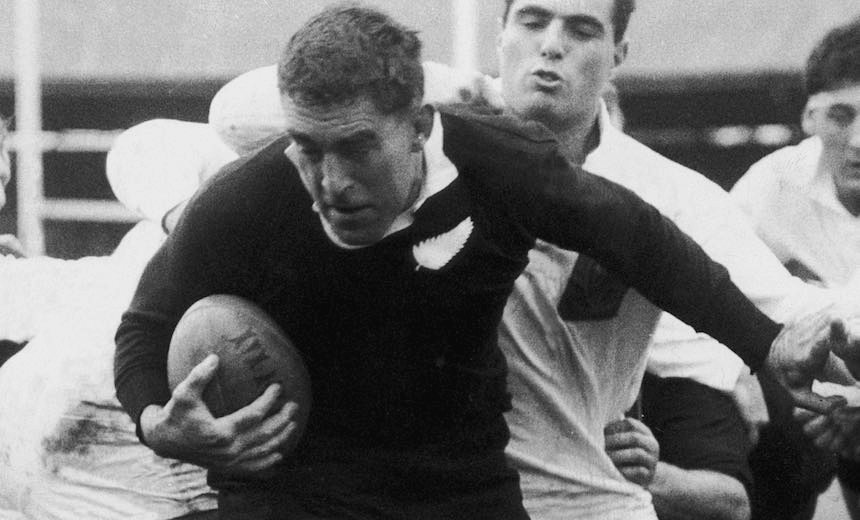 ‘This gruff old mountain of a man has a sense of humour!’: James McOnie remembers Sir Colin Meads

From his first encounter as an 11-year-old kid in Te Awamutu to yesterday’s funeral service, James McOnie remembers some of his favourite Pinetree stories.

He didn’t want to be called “Sir”, but Colin Meads deserved it.

Sir Colin will always be remembered as perhaps our greatest ever rugby player but now, as so many stories emerge in the week after his death, he will also be known as a hyper-competitive backyard cricketer, an adventurous ute driver, a hitchhiker, avid knitter and a kid who fainted at the sight of his own blood – until age 15 when “he got his act together”, as brother Stan put it in his brilliant eulogy at yesterday’s funeral.

They gathered in Te Kuiti in their droves. More than 2,000 people attended the service. In the main hall, with the family, were a legion of All Blacks greats, beside coaches, dignitaries, politicians and everyday people.

Many wore black. But several wore their colours – of club, province and country.

My first brush with Meads’ generosity was when my Dad asked, via Colin’s sister-in-law, if his son could borrow an All Blacks jersey for the fancy dress school dance at Te Awamutu Intermediate. Sure enough, it was no problem. Just one slight hitch – Meads admitted he’d given away all of his jerseys, but he would ask his mate, Brian Lochore. So set off a chain of events just so some random 11-year-old kid in the Waikato could wear an All Blacks jersey to a disco.

Saying yes was Pinetree’s greatest weakness and his greatest strength.

He helped raise millions for charity, most notably as patron of IHC, and he would’ve personally donated over a million dollars in unclaimed speaking fees.

Bold fans would call him and ask for an autograph. If time permitted, they were rewarded with an invitation to the farm for a cuppa. I’ve heard that fans would phone him at 2am and he’d answer the call. He’d always answer the call.

Yesterday in Rora St, a group of ex-rugby players, who suffered major spinal injuries playing the game, gathered at Sir Colin’s statue in their wheelchairs to share their memories of a man who looked out for them and inspired them to live their lives to the fullest. He was patron of the New Zealand Rugby Foundation, which helps severely injured players.

One of the players was from just up the road in Waitomo. He recalled Colin coming to rugby practice and teaching them a scrum move that helped them win tight games. Sorry but I can’t give away Waitomo’s best move, which is still used by the club to this day.

The statue, unveiled during the Lions tour in June, has attracted a steady stream of visitors every day to the main street, something of an achievement in a town where the busiest road is the bypass.

As a player, Colin Meads was incredibly athletic, strong and scary. He wasn’t the tallest lock – somewhere around 6-foot-3 or 4 (193cm). He would’ve played blindside flanker or number eight today. From the black-and-white footage, he looks to be a hybrid of current All Blacks Brodie Retallick, Liam Squire, Kieran Read and Vaea Fifita. Meads spent 15 years in the All Blacks, so under today’s schedule, allowing for injury, he would’ve played around 150 tests. As it stands he played 55 (133 games in total).

In 2004, when I was working at the Herald On Sunday, I collaborated with Sir Colin on the inaugural Pinetree Awards, which were a bit more fun than the NZ Rugby Awards. Meads chose the winner that year: Andrew Mehrtens, “the cheeky little bastard”. (Follow the link if you want to read more classic judge’s comments).

Mehrtens was at the funeral. I liked that he was sitting next to Grant Fox, the two talkers silenced in remembrance. There were so many All Blacks greats in the room. I’m sure the greatest of them all would’ve been chuffed with the turnout, if a little embarrassed at all the fuss.

In the years I knew him, Pinetree’s constant state was being unselfish, giving so much of his time and love to others. If anyone asked him for an interview, he would simply say yep. Not only that, he’d invite you to his home where you’d be treated as a guest. His wife Verna would bake scones, Colin would offer beverages.

One one occasion, I remember asking him about a dusty exercycle in his garage. “It’s a waste of bloody time. I just go for a walk up that hill,” he said, pointing to something akin to a green cliff.

His opinions on players were typically forthright. Nonu needed to “learn how to pass,” and he did. Sonny Bill was “bloody talented so they should pick him,” and they did.

Perhaps Sir Colin’s most underrated talent was public speaking. If you saw the funeral, you realised his brother Stan and daughter Shelley also shared that gift. I’ve MC’ed events where Sir Colin has had the audience eating from the palm of one of his giant hands… figuratively.

He was funny. Given he’d been on the speaking circuit since the early ’70s, you could argue he was New Zealand’s first, or longest-serving, stand-up comedian. The first laugh at any Colin Meads speech was usually one of surprise and relief. This gruff old mountain of a man has a sense of humour! And the laughs would continue for as long as you kept his glass topped up with beer.

He got around, and seldom turned down a speaking request.

The last time I interviewed Sir Colin, a couple of years ago, he’d just received a parcel from Fonterra. It was heavy. Meads told me it was “proper butter”. Turns out Pinetree had been disenchanted with the hardness of butter these days. Apparently, like many things in this world, butter had gone soft. And when he was speaking at a Fonterra function he told the CEO about his theory. The CEO of Fonterra, Theo Spierings, doubted the recipe had changed but he said he’d check. So Theo phoned the factory and the butter maker said the process had in fact changed over the years so yes, Pinetree was right. Fortunately they still made a batch of harder, old-fashioned butter for special clients and they immediately added Meads to the list.

Of course, he didn’t want special treatment. But he got it. As the people of Te Kuiti and Waitete Rugby Club will attest, Sir Colin was a man of the common people. He saw himself as one of them. He craved being ordinary. He was far from it.