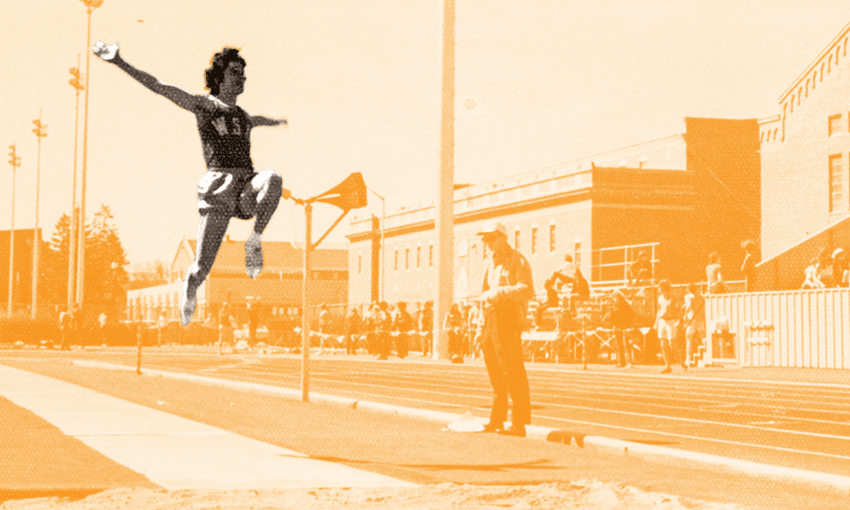 Summer read: In the 1970s, a young New Zealand athlete introduced the world to a radical new long jump technique. But unlike high jumper Dick Fosbury and the Fosbury Flop, the Delamere Flip never got off the ground.

Tuariki Delamere is upside down. Suspended in mid-air above the sandpit at the LA Coliseum, his knees are tucked in tight to his chest, white sneakers pointing to the sky and a mess of black hair just above the ground. He looks like he’s either about to change the sport of long jump forever, or break his neck.

The photo was taken during the first day of a Pacific 8 Track and Field Championship meet in May 1974, and appeared on the front page of the LA Times sport section the next morning. It was part of a series of photographs documenting one of the first somersault long jumps ever attempted in competition – and also one of the last.

“I only started somersaulting three weeks ago,” Delamere told the newspaper. “It was rough at first because I kept landing on my butt – I couldn’t even walk for a couple of days.” Decades later, he shrugs when asked why he decided to do a flip into the sandpit that day: “Athletes do dumb ass things if it improves their performance.”

Delamere is 22 years old in these photos, and in the final year of his maths degree at Washington State University. In the next frame, his body has rotated enough that we see his face, revealing a pair of nerdy thick-rimmed glasses.

Four years earlier, he graduated from Tauranga Boys High School as the top Māori student in the country, and with national schoolboy records in long jump and triple jump to his name. He wrote to the top 10 track and field programmes in the US, and every one of them wrote back to offer him a scholarship. He had never heard of Stanford, so he chose Washington State because they were the only school to follow up with a phone call – and because it snowed there in winter, and he’d never seen snow.

He first got the idea to try a somersault long jump in the winter of 1974. After returning from the Commonwealth Games in Christchurch, where he jumped “like a turkey” for a disappointing ninth, he started reading up on sports biomechanics.

The idea had been floating around the athletics world for a while – coach Tom Ecker wrote about it in his 1971 book Track and Field Dynamics, and several athletes, including future Olympic champion decathlete Caitlyn Jenner, were already experimenting with it in training. There was a rumour the Russians were preparing to deploy the technique at the 1976 Montreal Olympics.

From a biomechanical perspective, the somersault long jump makes a lot of sense. “All long jumpers [using the conventional hitch kick technique] actually jump up and backwards,” Delamere explains. “Otherwise they fall on their face. So the thinking was to not fight the rotation, to take it to its natural conclusion.”

After talking to the biomechanics professor at Washington State, he began to experiment with somersaulting in the relative safety of the pole vault pit. This was enough to convince him the gains were worth it, but moving onto sand was a big step for someone who had never done a somersault before in his life. The Pac-8 meet at the LA Coliseum would be the first time he’d jumped since being laid up with a back injury from landing on his butt too many times.

“I don’t like to jump in practice – I’m scared,” he told the New York Times in 1975. “[But] in competition the adrenaline is flowing and you don’t think about it.”

Only two people in the stadium that day knew what was about to happen – Delamere and Washington State assistant coach Rick Sloan. Even they would have been surprised when his first attempt landed feet first. The jump didn’t count – he overstepped the mark – but it showed the adrenaline was working.

With his second jump, Delamere again landed feet first, his heels touching down at the 8.40 metre mark. ”But because I didn’t really know what I was doing in terms of somersaulting, I fell back to 7.70 metres,” he says. If he’d rotated just a little bit further and not planted his hands behind him, this jump would have set a new NCAA record. Even at 7.70 metres, it was enough to equal the day’s winning jump from the reigning Olympic champion, Randy Williams.

Despite his self-confessed lack of gymnastic ability and having never truly mastered the technique, Delamere technically still holds the world record for the somersault long jump. He only got the opportunity to do it in competition one more time before the end of the season, and by the time the next season rolled around it had been banned by the IAAF for being too dangerous.

Tom Ecker, the biomechanically-minded coach who was among the first to propose the technique back in the 1970s, disputed that ruling. “I don’t think there’s any danger at all,” he told Sports Illustrated in 1974. “About the worst a guy could do would be to land on his behind.”

“If it’s dangerous and you gotta ban it, then you’d better ban gymnastics completely,” Delamere says.

In another timeline, his name could be as synonymous with the long jump as Dick Fosbury is with the high jump. But while the Fosbury Flop has long since been universally adopted, the potential of the Delamere Flip remains one of sport’s great what-ifs.

Delamere is adamant that if the technique hadn’t been banned, it would have become equally as dominant. And the men’s and women’s world records, both set three decades ago, would look quaint in comparison to how far modern athletes would be somersaulting.

“If the somersault hadn’t been banned by those old fuddy-duddys who ran world athletics back then,” he says, “the world record would be well over [nine metres] by now.”

Lightforce is the country’s fastest-growing solar energy company and is on a mission to create a lighter, brighter future. Find out how going solar can help you save money and reduce your impact on the environment.
24th May, 2022