Good morning and welcome to The Bulletin. In today’s edition: Court rules Sāmoan parliament must sit, more stringent mask rules could be on the way, and watchdog questions SIS use of CCTV.

A major Supreme Court decision in Sāmoa, which appears to clear the way for FAST to take office: The Samoa Observer reports the court has voided the controversial swearing-in ceremony held last month, but also ordered parliament to convene within a week. The court also ruled that any further attempts to obstruct the sitting of parliament would be unlawful. That means that the “lock-out” scenes we saw preceding the impromptu swearing in also couldn’t happen.

On the current election results, FAST has a narrow majority over the Human Rights Protection Party, by 26-24. But that could still change. Currently the courts are hearing electoral petitions would could still change the balance of power, on questions of whether candidates bribed voters (in New Zealand we’d call it “treating”.) These sorts of cases are very common after Sāmoan elections. Some recent ones reported by Samoa Global News include a decision in which several FAST campaign roadshows were declared legal, and a challenge by a defeated HRPP candidate against the victorious HRPP candidate, in the electorate they were both contesting.

When will parliament actually sit? FAST is keen to get on with it, and could move to have parliament sit as early as today. But caretaker PM Tuilaepa Dr. Sailele Malielegaoi wants to wait until all 52 MPs have been sworn in, reports the (paywalled) Sāmoa Observer, which depending on how election petitions fall could mean he’ll manage to hang on to the top job.

The government is looking at new, tougher measures around masks and QR scanning, reports Justin Giovannetti. It appears the calculations have changed on questions like mandatory masking in certain areas by the heightened virulence of the Delta variant. There were no formal announcements of new rules yesterday, but a strong indication was given that they’re on the way. Meanwhile, we’ll get an announcement later today on both the trans-Tasman bubble and Wellington’s alert level.

The watchdog over spies has questioned whether the SIS’s use of CCTV is lawful, and in fact has only just been declassified, reports Radio NZ. The Inspector-General of Intelligence and Security said in a report that SIS use is “targeted and specific” rather than for general surveillance, but found that it raised legal and privacy concerns. Such was the secrecy around spies tapping into CCTV cameras, only three people at the “network provider” that gave them access knew of the arrangement.

A pair of Auckland councillors are calling out low levels of funding for South Auckland community facilities. Justin Latif reports it follows decades of under-investment in parks and playgrounds and the like in poorer suburbs, which reflects both the way the money is spent and how much gets allocated in the first place. The way the system works is that boards that already have the most assets end up getting a bigger share of the funding.

Former Rocket Lab employees have claimed the company has a “toxic” internal culture, reports Henry Burrell for (paywalled) Business Desk. More than a dozen former workers were spoken to for the story, which painted a picture of internal fear, employment law breaches, and arbitrary favouritism from management towards staff. In response, a spokesperson for Rocket Lab said “it’s disappointing to see claims raised by disgruntled former employees in this way, but it’s something most large businesses experience at some point.”

It would be fairly easy for people outside of farming to forget the ongoing Mycoplasma bovis outbreak, but some farmers are still living it. Farmers Weekly interviewed two Southland farmers who are still locked in a dispute with MPI worth hundreds of thousands of dollars over the impact of culling cows. The reviews of MPI have been mixed – some farmers say they’ve dealt with good staffers there, while others argue having to deal with the bureaucracy has created huge challenges. Overall, the efforts against M. bovis have been pretty successful – MPI stats show there are just five active locations, out of hundreds that have been cleared. 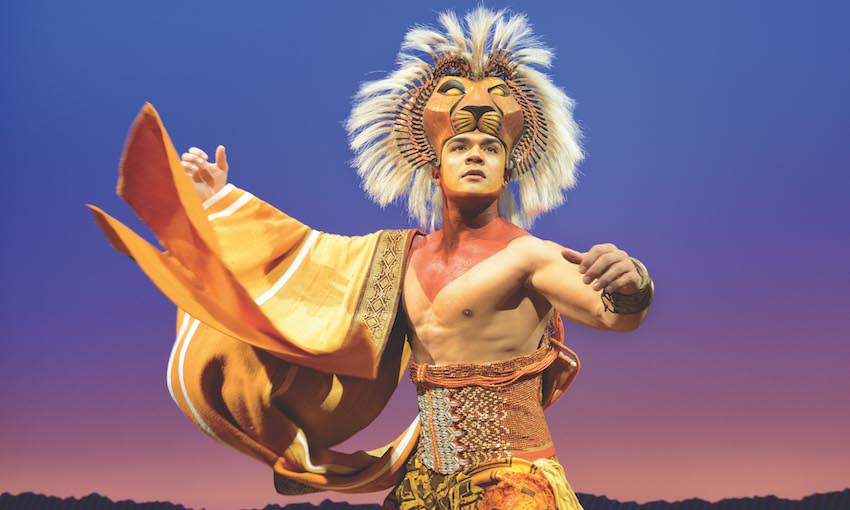 Nick Afoa as Simba in The Lion King. (Photo: Disney)

Right now on The Spinoff: Anna Rawhiti-Connell chews up a weight-loss device developed by Otago researchers that holds a patient’s mouth shut with magnets. Ethan Neville reports on the dramatic collapse in the biomass of tarakihi in the ocean, and whether anything can be done to reverse the damage. George Driver reports on the unusual economic situation New Zealand is in, where the economy has continued to grow through the pandemic. A former academic writes about falling out of love with the profession. Cassie Roma from The Apprentice Aotearoa reveals what really goes on in the boardroom, and assesses The Real Pod’s terrible business pitches. And a herd of critics went to the Lion King in Auckland and roared their verdicts.

For a feature today, a fascinating dive into a single word used in an apology to victims of child sex abuse in Australia. Crikey has been investigating why the word “ritual” was included, which some argue is meant to evoke the QAnon conspiracy theory. Here’s an excerpt from a piece that summarises Crikey’s years-long chase of this story.

The PMO told Crikey that the term “ritual” was “one that the prime minister heard directly from the abuse survivors and the National Apology to Victims and Survivors of Child Sexual Abuse Reference Group he met with in the lead up to the Apology, and refers not just to the ritualised way or patterns in which so many crimes were committed but also to the frequency and repetition of them”.

However, when Crikey checked with members of the national apology reference group in 2019 we got a different story. They told us that the term “ritual” had never come up in their discussions.

To prove the point, someone quietly provided Crikey with the group’s 20-page list of recommended terms and procedures to be used for the apology. We published part of it here. There is no mention of the term “ritual”. Leaking is the only resort for people on government panels who are otherwise bound to confidentiality.

In sport today, a few paragraphs that underline a pretty stark difference in how elite netball is being played at the moment. In their roundup of the ANZ Premiership, a pair of Stuff reporters note that concussions are becoming more prevalent, which is being attributed to escalating levels of physicality. On the table as a whole, the Northern Mystics have pulled ahead at the top of the table, with the Northern Stars close behind in 2nd.