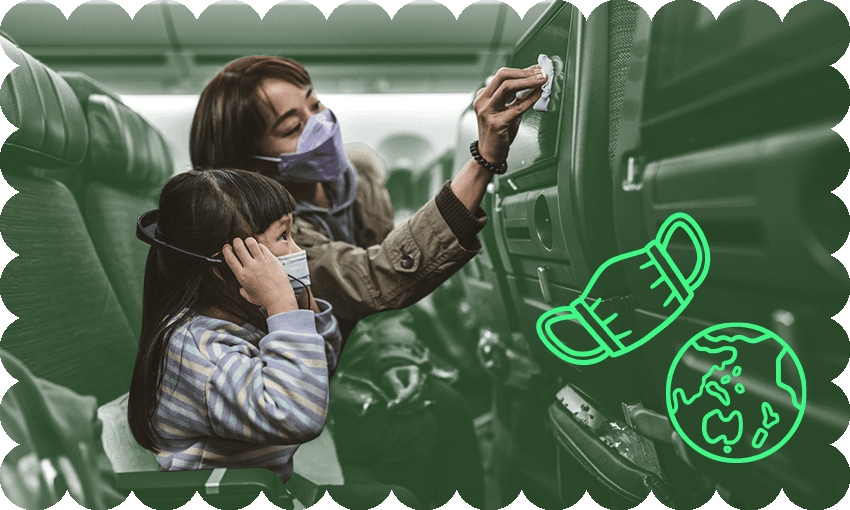 You thought international travel was stressful before? Just wait

By Paul Davies
Guest writer
Made possible by

Flying was always a grind, but the ever-present risk of Covid has added a whole new level of anxiety to the process. So how can New Zealanders rediscover the world without becoming a nervous wreck?

After two years of staying in, people are finally venturing out again. And now that they’re willing and able to go further than the local supermarket, tourism industries around the world are frothing at the prospect of foreign travellers injecting their hard-earned cash into their local economies (Aotearoa included). Those who are travelling are excited, anxious and perhaps a little terrified as they park their tracksuits, pack the swimmers and board the big kite that spread the old spicy cough in the first place.

International travel has always been a little stressful. I can report from recent experience that it’s still stressful, and now rather bizarre. As if it wasn’t strange enough sitting in a giant tin can 10,000 feet above earth, now we do it with the inherent risk of catching the very thing we’ve been trying to avoid.

My family and I were lucky enough to catch one of the first flights to Aotearoa from Melbourne after the government opened the borders on February 28th. We’d tried several times. First during the ill-fated travel bubble in 2021, then February 2022. Finally, we secured our tickets to see our families on March 1. Our three-year-old son watched as I hauled our suitcases from the depths of the wardrobe. “What’s that thing, Dad??” he asked. I peeled off a thick layer of dust and he chortled heartily as I told him it’s a “suitcase”.

Unfortunately, the novelty quickly wore off.  Soon tantrums were being thrown on the airport floor next to said suitcase, while Air New Zealand informed us that our Australian-born children had been blocked from entering the country of my birth. After a 10 minute call to customs, we were manually cleared and having already provided international vaccine certificates, PCR test results and newly required customs declarations, we fled check-in and the many eyeballs witnessing our wee family crisis.

On boarding the plane I was immediately hit with a wave of claustrophobia, as I realised I was doing the least amount of social distancing for a long, long time. As we found our seats I was bumped from the side, behind and in front simultaneously. Despite my anxiety, I realised I’d almost missed the stress. I was back where I belong – in cattle class. The delays I didn’t miss, however. Sitting on the tarmac for an hour, the frustrated pilot narrated the scene below as one airport tow tug serviced several aeroplanes. The pilot dryly informed us that the company had laid everyone off in 2020 and were training newbies on the tug below. I breathed deeply into my N95 as our wailing baby repeatedly slapped my forehead.

It seems my Covid-related travel anxiety is not unique. Brazilian-born Aucklander Bobby Mukai travelled home to Sao Paulo recently: a 42 hour one-way trip. “There was one stopover in Kuala Lumpur, which was really scary,” he recalls. “We didn’t even leave the plane, we stayed seated, people came in and cleaned it and got out.” Having not flown internationally in so long, Mukai admitted feeling mixed emotions. “We were super excited about going to Brazil and super anxious about being on a plane around so many people,” he says. “Not much social distancing, people standing, no masks… It was a bit strange but we had to deal with it because we wanted to go.”

And while people like Mukai and I feel that flying internationally is now strange, apparently it’s actually a lot less bizarre than it was. London-based Kiwi journalist Andrew Potter had the misfortune of needing to travel throughout the pandemic. “At its peak I was flying around on giant empty jets with cabin crew dressed head to toe in PPE,” he says. “Each passenger was treated as though she could be exhaling fire, Ebola and Covid-19 simultaneously.”

Air New Zealand mid haul deputy service manager Teio IIa was one of those fully-clad flight attendants. “We were all wearing full protective gear including goggles, masks and gloves,” he says. At peak-Covid, a jumbo jet built for more than 400 could be carrying just 20 passengers. Potter says some crews took distancing very seriously. “A 13-hour Singapore Airlines flight served dinner barely 15 minutes after the aircraft had taken off from Heathrow, to keep interactions between crew and passengers to a minimum.”

And if the pre-travel documentation required today is daunting, spare a thought for the early adopters of pandemic travel, says Potter. “In the early days of the Panny-D these tests cost a fortune – one place in London was charging nearly $1000 for a same-day test. At the same time countries around the world introduced mandatory Passenger Locator Forms which were complicated and time consuming… Failure to complete these forms correctly would mean you weren’t allowed to fly.”

Despite many countries now having dropped pre-departure testing, New Zealand’s requirement remains – for now. With changes occurring constantly, Ila says preparation is key. “Find out everything that’s required of you to make your travel experience smooth,” he suggests. “Each destination has a different set of Covid rules so prepare early!” Hunt for the information on government and airline websites – and take nothing for granted. We foolishly listened to hearsay and PCR tested our 10-month-old baby, only to later realise this was not actually required. Plan properly and save yourself time, money and baby tears.

And don’t just prepare your paperwork – prepare yourself mentally. Many countries have moved on from the pandemic and few rules apply, which can be shocking to Kiwis who are only now experiencing their first real taste of Covid. When Mukai arrived in Brazil, a nation that was devastated by Covid in 2020-21, he found that most locals seemed to have put it behind them. “Things were just normal, life was normal. Nobody wore masks,” he says. “They speak about ‘the time of the pandemic’, ‘back in the pandemic’. They speak as if it’s over.”

The US is also moving on, with the mask mandate for public transport recently removed by a federal court judge. The ruling came as a relief for many airline crew, who’ve struggled to police disobedient and sometimes physically aggressive passengers. Potter also welcomed the change. On his recent flight home from New York, he experienced flying with a barefaced crew. “The maskless cabin crew were a delight, as I could understand what they were saying to me for the first time in two years.”

Most international flights still require masks however, so be armed. Flight durations can transcend the life of a lightweight mask and they tend to absorb the aromas of your in-flight meal, so carry spares – along with some RATs (nobody wants to be a super spreader). Before boarding his flight home to Brazil, Mukai packed 20 rapid antigen tests to help protect vulnerable people such as his parents. “Every time we’d go somewhere that was full of people with no masks, like when I went to a concert with 300 people… we would take tests,” he says. “That’s the type of protection I’d have for myself and the people around me.”

Sanitiser is another essential, but even carrying that is not without risk. “I carried hand sanitiser for a while,” Potter laments, “but abandoned this practice after one incident where the change in altitude super-pressured the little bottle, and when I flipped the lid the contents exploded all over me and the guy next to me. Awkward.” Awkward indeed. And while travelling always carries the chance of catching Covid, you’re also at the risk of contracting a very different virus. “We’ve got the travel bug again,” Mukai confesses. “While we were in Brazil we already bought tickets to go to Australia.”

Despite all the fear and anxiety that might tag along for the ride, positive emotions can and will win. Be present and enjoy. Because it’s not just getting from A to B – it is the A to B. “It’s the butterflies in the tummy when you’re packing your suitcases, driving to the airport, having the family together,” Mukai says. “Doing the trip, watching a movie on the plane, getting to see my family after three years… I really loved that feeling again. Hopefully we can keep it up for a little bit.”

Given some tourism industries are struggling to be resuscitated, with rental car shortages in Queensland and the Cook Islands desperate for workers, it’s probably worth packing some patience for your journey. While research is vital, most aspects of international travel are beyond your control, especially as it’s taking off again during a time of global economic and geo-political turmoil. Challenges will arise, there will be tantrums and tears – and the kids might get upset as well. Don’t be Potter’s ill-fated hand sanitiser and burst under pressure, just control what you can and relish the rest.

And don’t cave to anxiety and stay in (again). You deserve this – as do tourism operators. Because as Mukai says, you’re doing good. “The tourism industry needs you, places like Thailand, Bali, Brazil, Australia, they need you.” They do need visitors. Almost as much as New Zealand needs them. Godspeed intrepid traveller, godspeed.