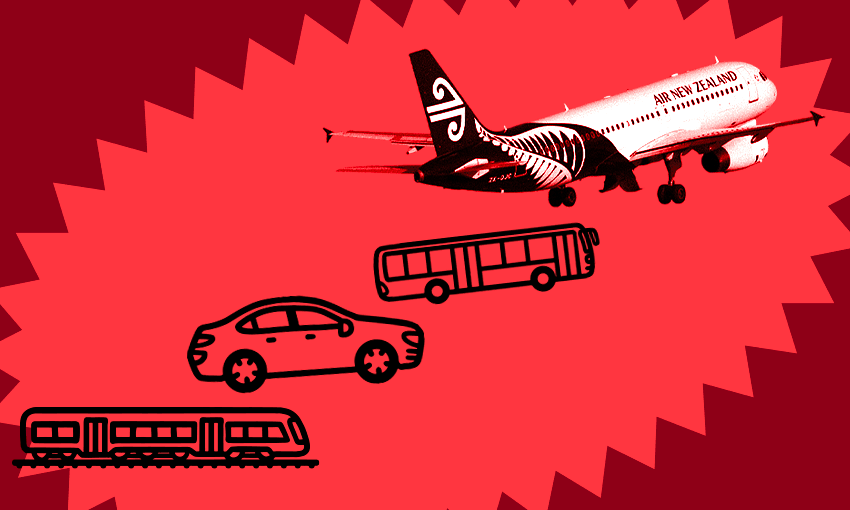 There are structural reasons that planes always seem like the easiest way to get somewhere. (Image: Tina Tiller)

What’s behind NZ’s recent air travel chaos – and why are there so few alternatives?

There are structural reasons that planes always seem like the easiest way to get somewhere. (Image: Tina Tiller)

A perfect storm of problems has seen domestic flights cancelled left, right and centre this week. But with costs and climate change a big concern, what other options do customers have for getting where they need to go?

At one point, Shreyas Ramasubramanian had 10 tabs open on his laptop, flipping between them to find the best option. The cloud systems engineer was in Auckland over this past weekend, and had been due to return to Wellington on Sunday night when his Jetstar flight was cancelled. After a long wait to contact a representative, Jetstar offered him a refund or a replacement flight. He took the refund, and decided to look for alternative transport.

Direct Air New Zealand or Jetstar flights to Wellington weren’t available for three days, seats snapped up by the hundreds of other customers scrambling to replace cancelled flights. Flying to Paraparaumu or Palmerston North then taking the train to Wellington was more expensive still. Flying to Nelson then Wellington was a possibility, but it would have required sleeping at the airport. He wanted to get to Wellington by Tuesday morning, and despite being entertained by the “humorous combinations” of transport options he was conjuring on his screen, all but one of them cost much more than he’d originally paid for his Jetstar ticket. He booked the Intercity bus.

Weather conditions, Covid-related staff shortages, and “operational issues” have caused more than a dozen flights between major centres to be cancelled this week. While it’s certainly good news for Stuff’s “Travel Troubles” section, it indicates a wider question: why are airline services so tenuous right now, and why are there so few alternatives?

The pandemic, of course, is a big part of why the airline industry is so up in the air right now, says Thanh Ngo, a senior lecturer in Massey’s school of aviation. “The frequency of flights in and to New Zealand dropped 85% between 2019 and 2021,” he says. “The war in Ukraine and the high fuel costs are making prices in the industry higher, too.”

The pattern of cancelled flights and expense and nuisance isn’t limited to Aotearoa; Australia, the US and Germany are all encountering similar problems. The causes are the same: the airline industry made fast international travel affordable for many by operating with extreme efficiency and small margins. The pandemic has changed the staffing calculations that made this efficiency possible.

In Aotearoa, it’s a classic example of supply and demand. “Covid policy now seems stable, so people want to travel,” Ngo says. But airlines don’t have the capacity they had pre-pandemic; Jetstar has cut regional services and Air New Zealand is desperately trying to hire more staff. “Flight frequency has to go up for the New Zealand aviation industry to recover – there’s a surplus of consumers who want to travel, but can’t.”

While some of the capacity issues are a product of the pandemic’s economic disruption, the direct effect of the current cancellations is a product both of bad weather and the Covid wave sweeping the country. While some businesses can still run with limited employees, the safety regulations of airlines mean that a flight must be fully staffed. At Massey’s school of aviation, Ngo has seen graduates entering an uncertain labour market in 2020 and 2021 suddenly find jobs across New Zealand and internationally.

The effects flow on, too: if a plane can’t leave one airport, then it won’t be in the right location for the next lot of passengers. New Zealand’s small size also means that weather disruption can affect multiple airports. Because Air New Zealand and Jetstar operate as a duopoly for high-frequency connections between the main centres, the likelihood of cancellation won’t stop consumers using these services: there’s simply not much choice.

But the pandemic isn’t going anywhere, and neither are flight-interrupting weather conditions exacerbated by climate change. “Flight disruptions are going to continue for months to come,” says Ngo. If the industry ever manages to recover to 2019 levels, it will be slow. So for people wanting to get from A to B, what are the alternatives?

Well, there’s the train. KiwiRail operates commuter services between Hamilton and Auckland and Palmerston North and Wellington for weekday commuters. They also have a line that runs from Auckland to Wellington, from Picton to Christchurch, and from Christchurch to Westport. However, these longer-distance services are “scenic”, designed for tourists – and priced for them, too. “KiwiRail’s passenger service may be an alternative to some domestic air flights, but this would be fairly limited,” says Tracey Goodall, the general manager for KiwiRail’s scenic and commuter services.

“Passenger rail has a role to play by providing a low-emissions transport option,” says Goodall. But it’s not low cost: the Auckland-Wellington rail service, which costs as much as $219 one way, won’t resume until September, and takes 12 hours, comparable to a bus. With an alternate day frequency, and a capacity of only 126 people on the Picton-Christchurch service, 189 on the Auckland-Wellington service, and 252 people on the Christchurch-Greymouth service, train lines can’t carry nearly as many people as frequent flights. In comparison, Air New Zealand runs as many as 17 Auckland-Wellington flights per day, and Jetstar around three; most of these services will be on Airbus A320s, which can fit up to 180 people; that’s room for as many as 3,600 people just between those two cities, vastly more capacity than any of the other options.

Rail can’t compete with flights for speed or cost, although wifi on board, beautiful scenery, and comfort may compensate. Because these services are “scenic”, rather than for transport purposes, they’re not part of the current public transport subsidy, or other government support. Meanwhile, Air New Zealand’s passenger and cargo service has received hundreds of millions of dollars of government money since the start of the pandemic.

There’s also the Intercity bus, which carried over a million passengers per year pre-pandemic, many of them tourists and backpackers. The bus services go to many places where there are no airports, have a relatively stable pricing structure, and can be booked within hours of when you want to leave. Unlike airports, which are usually far from CBDs where land is cheap, bus stations are centrally located and easy to access for those without cars. But bus services, too, are limited in frequency and capacity, and prices are usually on par with cheap flights – and much slower. (Intercity did not respond to The Spinoff’s multiple requests for comment).

The limitations of bus and train services reiterate how dependent New Zealand’s transport system is on high-emission private cars and planes, and how urgently that needs to change. The transport system isn’t working for people who don’t want to fly, or live in places without airports. Overseas, robust rail infrastructure means that high-speed rail services are an affordable and convenient way to get around, but – as the trials and tribulations of the City Rail Link show – creating this infrastructure will be expensive. At present, the lack of options for consumers without cars means that when events like bad weather, mechanical failures, or the ongoing pandemic knock out some airline services, customers get stuck.

For Ramasubramanian, who arrived in Wellington on Tuesday morning, sleep deprived after a rainy night on the bus, his experience has reinforced the reasons Aotearoa’s transport infrastructure needs to improve. “There should be more alternatives for domestic travel beyond flights at a sensible price point,” he says. “We’re well connected by flights but if that isn’t an option, Intercity has a monopoly on buses and the railways are just for scenic purposes.” For now, flying is going to be his default for getting around the country – but he might be done booking with Jetstar.

This summer, more of us than ever are biting the bullet and heading out into the great outdoors for the first time.
By Guest Writer
Guest Post
28th January, 2021

After the second lockdown came to Auckland, Nick Atkinson dusted off and spruced up his bicycle,
By Nick Atkinson
Guest writer