Overseas critics are raving about this deadpan Kiwi comedy, and it’s just been picked up by a huge American network after being turned down by TVNZ. Sound familiar?

It happened slowly, across six months. The creators of Good Grief, a deadpan comedy that slipped under the radar when it was released here in January, had all but given up hope of securing funding for a second season. TVNZ, which commissioned the first, backed by NZ On Air, had said no. Then emails started landing indicating interest from an overseas network, each more hopeful than the last.

“It wasn’t one big reveal – it was little bits over time,” says Grace Palmer, who created and stars in the six-part series about sisters who inherit a struggling funeral home from their koro, alongside her older sister Eve. It was their first show together, and they’d been dreaming it up for years. But a second season wasn’t on the table. “We never thought anyone in America would want to make another fucking season of it.”

Slowly, the emails, from US broadcast giant AMC, the home of Emmy-winning shows Breaking Bad and Mad Men, changed in tone. Grace says they went from, “Hey, so it turns out AMC really likes the show and they’re keen to buy the first season,” to, “Hey, it turns out AMC might be interested in putting some money towards the second season,” to “OK, it turns out AMC is going to make the whole season.”

Even getting the first season was a surprise. Neither Eve nor Grace can remember exactly when Good Grief became a TV show in their minds, but they have notes dating back years. They also remember a death in the family, a “really heavy time” lightened by two family members coming home from dressing the body. “They came back in hysterics,” says Grace. “One had to literally hold him over their shoulder while the other did the pants. We had that image in our head.”

They kicked around ideas, pieced it together slowly. Poking fun at death was always Good Grief’s central concept. “We’re all going to die, yet that sentence makes people feel very uncomfortable,” says Eve, who believes too many taboos surround the topic. “It sits on the outside of normal conversation and normal society. We go there when we have to then we scurry away and pretend it’s not going to be a reality. I think we thought there was a lot of comedy there.”

There is. Shot at a South Auckland community centre over 15 days in the winter of 2020, Good Grief’s six 15-minute episodes are extremely funny, full of awkward embalming practices, shoddy funeral home viewings and screw-ups during services. One involves a golfer whose clubs won’t fit in his casket. But it’s also heartfelt, the love between Grace and Eve’s characters Gwen and Ellie coming directly from their own relationship.

And it looks great. Produced by Brown Sugar Apple Grunt Productions, Good Grief was made on a shoestring budget of $500,000, funded through an NZ On Air new storytellers initiative. An experienced team was at the helm: Kerry Warkia produced it, Kiel McNaughton directed it and Nick Schaedel helped Grace and Eve hone their story. 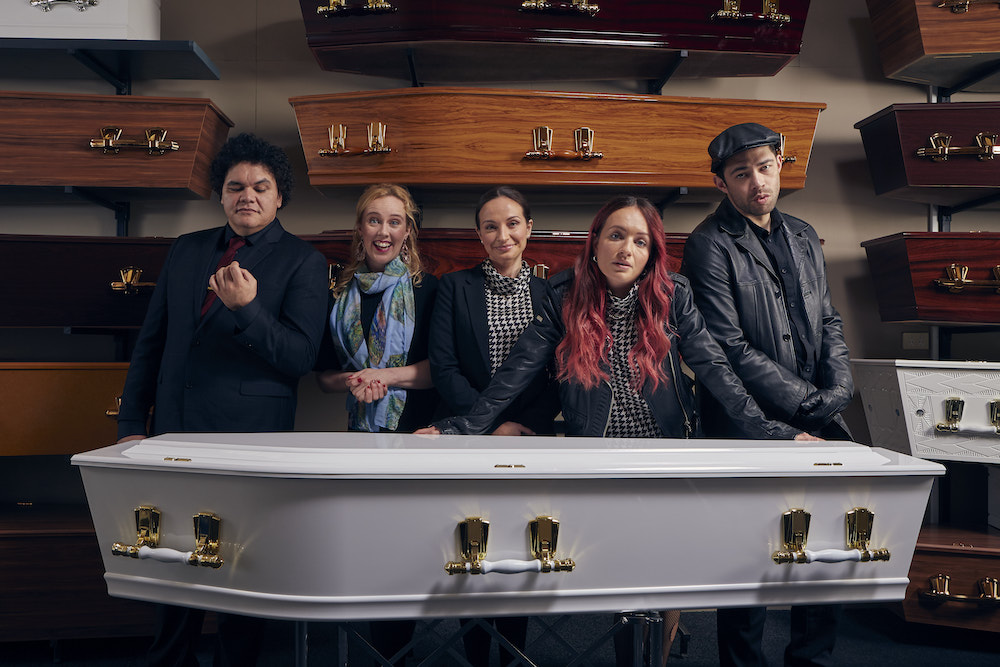 It debuted, via TVNZ OnDemand, to little fanfare. Despite being packed with familiar TV faces – The Project’s Josh Thomson, Fast & Furious 9 star Vinnie Bennett and Westside’s Sophie Hambleton have starring roles – it landed with a whimper. Eve and Grace did just a couple of interviews to promote it, and few, if any, reviews were published.

“It definitely wasn’t a big deal,” says Eve. There was no marketing budget. “It was just us,” says Grace. “I just reached out to a bunch of people on social media and asked them to watch it and if they liked it to share it.” The one shining light? Feedback from those who did see it was good – especially among their peers. “The cool thing was a lot of people at our age and stage, women in their 20s, said they loved it,” says Grace.

Good Grief found its way to AMC through Warkia, thanks to an introduction from Chris Payne at the New Zealand Film Commission. Warkia says the trail blazed by Flight of the Conchords, Taika Waititi and Rose Matafeo overseas, as well as demand for indigenous, female-led talent, did the rest. The international success of The Casketeers, via Netflix, and Wellington Paranormal, surely helped too. “If it’s universal enough to travel, but it has the specificity that makes it unique, there’s a hunger for that,” Warkia says.

The small team refused to celebrate until a contract showed up. Then it did. In late August, the industry know-it-alls at Deadline reported that AMC didn’t just want to use its network of cable channels to deliver Good Grief to a worldwide audience, it was also willing to entirely fund a second season. “I think they were shocked at what we made it for,” says Eve. “It was nothing.”

An American network picking up the bill for the second season of an Aotearoa-made series is a rarity, and may even be a first. No one spoken to for this story can remember it happening before. Eve assumed executives would want to make changes to appeal to an American audience, but, AMC told her and Grace to keep doing what they’re doing. “They said they enjoyed the heart and humour … they love Flight of the Conchords and Kiwi comedy and there’s an appetite for it.” Eve’s reply? “I asked if it would need subtitles.”

Now that Good Grief has been taken off life support and resurrected, it’s become a very big deal. Major overseas publications are plugging it, viewers are digging it, and they’re watching it in America, Canada and the UK through Sundance Now, an AMC-owned streaming service. The New York Times sent out an email recommending the show to its millions of readers last week, saying it was more “quirky comedy than a bummertown weepfest”. An SBS story asked: “Is New Zealand the funniest country on Earth?”

That’s not all. In the UK, The Sun called it “silly, tender and smart – and a lot of fun”. In a separate story headlined “The show you have to watch this week”, Deadline profiled Good Grief alongside Squid Game, the killer South Korean hit that’s rapidly become one of the world’s most-watched shows. “It’s very surreal,” says Eve. Grace agrees: “The fact that it’s overseas and critics like it is mind-blowing.”

It’s a situation that brings to mind Flight of the Conchords, when Jemaine Clement and Bret McKenzie were forced to take their show to HBO after TVNZ rejected their pitch. We all know what happened next. “We didn’t have heaps of support from TVNZ for a second season,” admits Grace. “They weren’t that interested … they had other projects they wanted to support.”

Yet she and Eve say they’re not upset. “We never thought that it would get picked up in New Zealand to get made [in the first place] so that was a surprise,” says Grace. The pair say plenty of local shows are competing for access to a small funding pool. “I totally understand if NZ On Air and TVNZ want to share the money out,” says Eve. “I think that’s awesome.” In a statement, a TVNZ spokesperson said they were “thrilled” Good Grief had secured overseas funding, and confirmed the second season would screen via TVNZ OnDemand.

In that story for Deadline, AMC’s president of original programming, Dan McDermott, said the team “were in love” with the show.  “We jumped at the chance to work with Eve, Grace, Nick, Kiel and Kerry to commission further adventures with them.” Eve and Grace are working on those adventures right now, facing a Christmas deadline to turn in scripts for season two. “There’s a lot more story that we want to tell,” says Eve. “They’re always in our heads, these people.” They hope to begin shooting – Covid-19 – permitting next year.

Yes, the budget for season two will be bigger, but that doesn’t mean Good Grief will change. The second season will remain just as dark, and hilariously bleak, as the first. “It’s a shit town with a shit funeral company. It’s all a bit shit,” says Grace. That, she says, is what makes their show relatable to audiences both here and overseas. “No one’s glamorous. We shot it in winter and it all looked a bit glum. It was meh. It all sort of worked.”

Updated 11am: A spokesperson from TVNZ has responded: “Good Grief received a full publicity campaign when the series launched in January, which included a number of interviews, highlights and reviews. This show was supported with publicity and with marketing spend.”

Watch season one of Good Grief via TVNZ OnDemand.