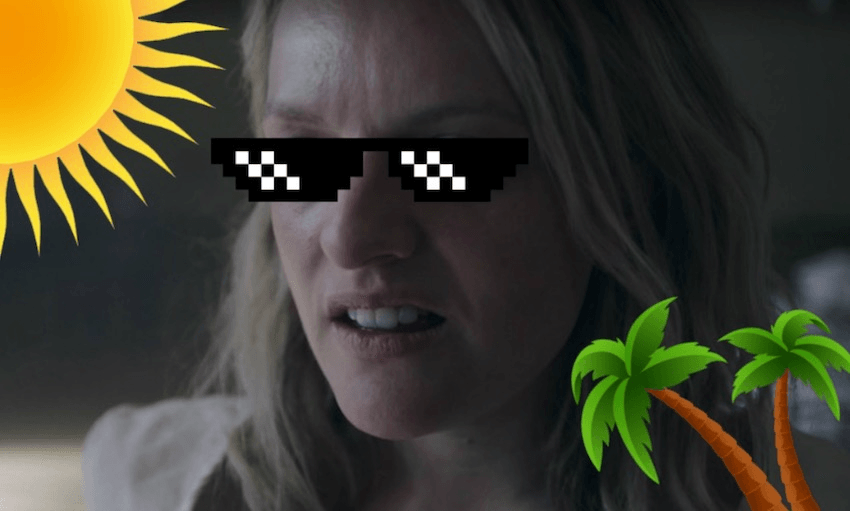 The Handmaid’s Tale recap: We’ve been sent good weather… or have we?

June, in the sacred words of Fur Patrol, am I surprised to see you here with Lydia? No. No I’m not. After last week’s literal plane crash disaster, I knew it was only a matter of time before we returned to the Gilead to check in with our Matron Saint of Cattle Prodding. June is counting the number of roses on the duvet – or “comforter” as they ironically insist on calling it in dystopia – chained to the bed with even less to entertain herself than a pig in captivity. At least piggies get a ball to play with.

Straight off the bat, something feels different in the Gilead this time. June’s eyebrow stays quietly cocked, her chin defiantly pointing outwards, her mouth occasionally blurting out casual aggressions hidden under niceties about the weather. Getting a taste of the outside has changed her forever and, so long as Aunt Lydia is going to try and force feed her the fake guise of Handmaid ‘freedom’, she’s going to continue to spew it right back up. For now.

This episode we are back to Keeping Up With the Waterfords – which would be the worst reality show ever made – and are offered a new side to Serena Joy. She seems constantly torn between hating and resenting June with every inch of her being, and wanting to protect and nourish her as she grows “her” unborn child. With pregnant June on the run for 92 days, a baby shower is definitely in order. Shoved to the side as the posh women fuss and open luxury toys, June reminds us all that she holds the true gift. “I felt the baby kick for the first time last night,” she snarls quietly from the outskirts.

It’s the relationship between June and Serena Joy – also June and every woman in the world of this show – that’s becoming more and more fascinating as the show exhales and expands. In a disarmingly tender scene, Serena Joy creeps in to June’s room and spoons her, gently resting her hand on her pregnant belly. It looks like a scene out of The Gilmore Girls or some crap, not to mention the fact that we also got to see Selena with her hair down AND smoking a cigarette. Three dimensional? She’ll show you three dimensional.

Through flashbacks to the pre-Gilead world, we see another important interaction between two women in a very different hellish situation. When June met her baby daddy Luke, he was with another woman. When they began sleeping each other, he was still with another woman. That woman is finally given a name and a face in this episode when she confronts June after a yoga class and begs her to stay away from her partner.

For all the excruciating scenes that The Handmaid’s Tale dishes out, this one was equally as torturous. It’s a testament to the show that they can make melodramatic affair confrontations land with as much of a wallop as someone cutting their own ear off, that’s for damn sure. “Did you ever think of me?” asks Annie of June. Very heartbreaking and very horrible.

I’m yet to mention the real “Other Woman” of this episode. There are no two women more at war with each other than June and Offred, both trapped in one body and equally keen to subvert and obey. As Aunt Lydia moves into the Waterford residence to make smoothies and take June for walks, it’s obvious that she is working towards something. She’s simply not that nice. That something turns out to be the hanging dead body of the driver who helped June escape, a reminder that everything she touches can be punished, even if she can’t be.

ELISABETH MOSS FACE OF THE WEEK

SHOT OF THE WEEK

TUNE OF THE WEEK

Not one for Friday drinks but maybe good for the Saturday hangover?