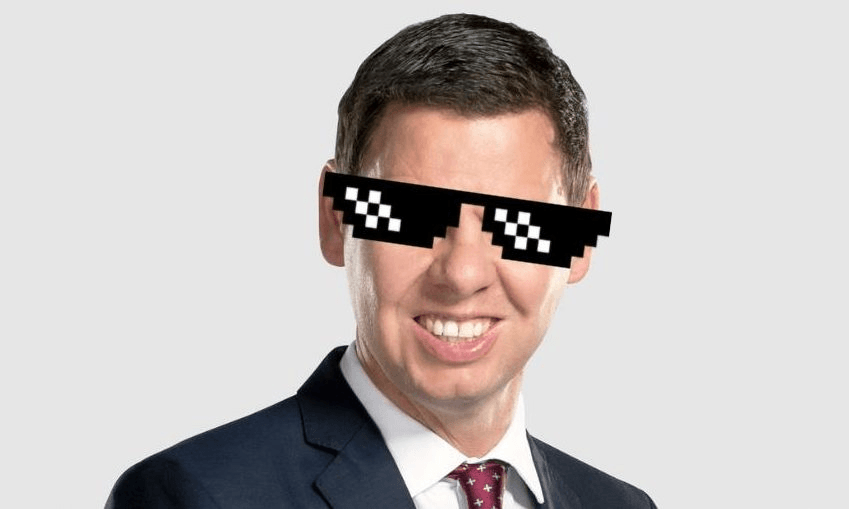 This was the fucking news: Patrick Gower exits as Newshub political ed

The dynamic and polarising Newshub political editor has announced he’s leaving the role. Here are the Interesting and Incisive musings of Toby Manhire, along with an emotional video tribute from José Barbosa.

Days-to-go guy. Puffed up little shit in chief. News fucker. Say what you like about Patrick Gower, but he is always – well, just about always – self-aware. Witness his comment in Newshub’s story about his departure as the Mediaworks news division’s political editor. “Phenomenal and compelling”, says the county’s top political hypeman of the role he is vacating.

Gower – who has been in the Press Gallery for a decade, the first two years with the Herald and the rest at Newshub, five as political editor – isn’t everyone’s cup of tea. He overdid it at times, such as in his ill-judged insistence that it was a Newshub poll that drove Metiria Turei to resign. But he wasn’t beyond, such as in that case, admitting as much, and he discernibly reeled back over time his tendency to declare how the New Zealand public was about to perceive this-or-that, in part because of his experiences covering the Trump election. On the whole, his news nose, tenacity and singular personality added up to an exceptional political journalist.

Last week parliament paused to pay tribute to Ian Templeton, who is retiring after an even longer stretch of 60 years in the Press Gallery. Winston Peters led the accolades. “As a journalist, you were amazingly accurate, interested in the details, a repository of deep knowledge, and, because of that, the stand out character in the press gallery,” said the deputy prime minister, who is currently seeking monetary damage from two journalists for alleged privacy breaches in reporting a story he deems unworthy of coverage. (Peters himself, strictly, broke the story in a press release, but let’s not tarry on all that here.)

But for all that Templeton and Gower are different sides of the style coin – I may be wrong, but I find it hard to imagine Templeton going along with a request from a student group to perform a sketch with the punchline “this is the fucking news” – they were much less far apart in substance. Gower certainly sought to amp up the drama in a story, ideally involving chasing a politician into a lift, but the politicians who accused him of confecting stories were most often simply dissembling themselves. And remember, for the politics editor half the battle is persuading the bulletin editor that your story is exciting enough to go high up the news at 6, or in the bulletin at all.

And for all the blasts of circus, Gower has always taken his role very seriously. He studied politics at Victoria University, and wore his passion for politics on his sleeves. Every other week he’d be giving a barnstorming and inspirational speech to some group of politics or media students, deluding them into believing that a career in either is a good idea.

The seriousness with which he took the job was underlined by his preparation for the Newshub election debate. Maybe he knew he would be moving on soon when he absented himself from the news team for over a week during the white hot campaign to swot up. It was the pick of the lot, extracting among other things an apparently on-the-fly commitment from Bill English on child poverty. As he moves on to a new position as “national correspondent”, whatever that means, Gower will, I suspect, regard that debate as the pinnacle of his time in the role.

Why is he vacating such an important job? You can read the blather in the Newshub account, but a better explanation probably comes from Gower in his interview with the Spinoff last year. “It’s like a tyre, and you’ve only got so much tread on it,” he said when asked how long he could stay in the role. “When you come in and have heaps of tread, you’re impervious to a lot of things, and then just – it’s like a tyre with tread on it and acid rain being put on it.”

It is not obvious who that successor will be. Lloyd Burr is the fastest rising star in Newshub’s political reporting team, and built very much in the image of Gower, as Gower was in the image of Duncan Garner before him. Could Lisa Owen be persuaded to do it? I’d be willing to contribute my own money to that. Or a swoop on the TVNZ stable? How about Mark Richardson?

Whatever. The succession battle is on. It will be Exhilarating and Intriguing. And there are only 20 days to go.

Correction: an earlier version of this article said Tova O’Brien is soon moving home from the UK. But she isn’t so we took that bit out.