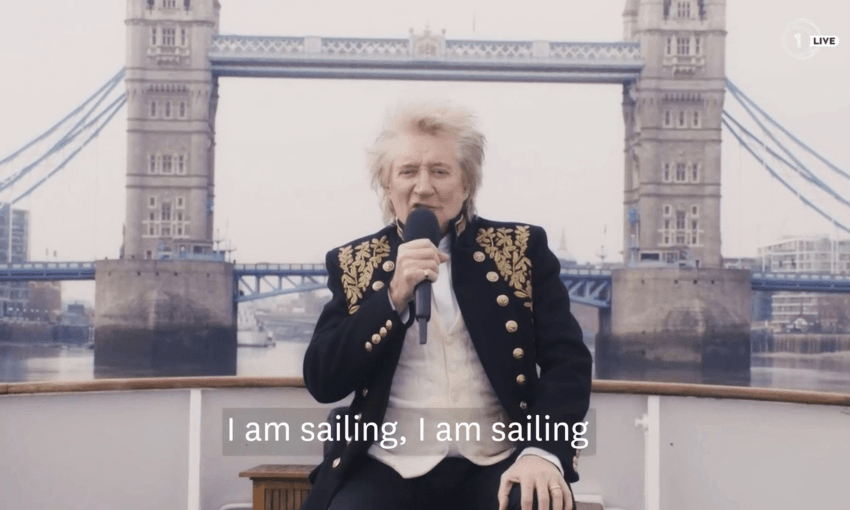 He is sailing. Screengrab: TVNZ

Review: Rod Stewart Rocks the Dock in Auckland while puttering down the Thames in London

He is sailing. Screengrab: TVNZ

America’s Cup racing is all about the pre-start, but even more exciting was the pre-pre-start, as a septuagenarian Brit belted out ‘Sailing’ from a barge on the other side of the world at some unknown moment in the recent past as if it was the most natural thing in the world. The Spinoff’s chief dock-rock correspondent Tara Ward tuned in.

Forget the America’s Cup racing, because today’s action at Auckland’s Viaduct was all about Sir Roderick Stewart. The 76-year-old British singer gave an extraordinary performance as part of the “Rock the Dock” campaign, a partnership between Tourism New Zealand and Auckland Unlimited that aims to “send a message of unity and aroha to friends, whānau and fans around the world”.

Nothing sends a message better than a global singalong of the 1975 banger ‘Sailing’, and Stewart’s performance would be played in the Viaduct and screened around New Zealand on TVNZ 1. Buoyant TVNZ America’s Cup hosts Toni Street and Scotty Morrison reckoned the Viaduct Harbour was a joyous level one boogie wonderland, and Scotty reckoned you could feel the ground reverberating. The dock was already rocking, and Rod hadn’t even sung a note yet.

While Toni and Scotty wanged on about the racing and William Waiirua talked to Nanogirl about a car, we waited for Rod. Blah blah, yachting, blah blah. Panelist Dean Barker wore a Barkers t-shirt and looked unimpressed on our behalf. We want Rod, his polite grimace seemed to say, and I felt his pain. Everything was fantastic at Viaduct Harbour, apparently, except it wasn’t. Where was Rod? What the fock re: rock the dock?

Dock rocks come to those who wait, and while we warmed our vocal chords, fisherman Clarke Gayford interviewed the Dock Rocker over Zoom. Clarke sat in the prime minister’s lounge and Rod sat in his London palace, holding the Pineapple Lumps someone from Tourism New Zealand probably bribed him with. Rod loves New Zealand as much as he loves the sea, which is why he’s doing this singalong. Rod’s got the lumps and the lamps, and together they’re about to make the world a better place.

Suddenly, Clarke popped up in the Viaduct to remind us the only thing that could top this wonderful Auckland day was a rousing singalong with Rod Stewart. Who hasn’t thought the exact same thing whenever they’re in Auckland? “Belt it out to the best of your abilities,” Clarke suggested, sadly overestimating just how best my abilities could be.

At last, there he was: The Rodinator, resplendent, regal, primed to rock the dock. His hair bent beautifully in the breeze, his skin shimmered with passion for New Zealand, and he drifted down the Thames in bright daylight even though it was 2.30am in England. Around him was lockdown London, grey and grim compared to Auckland’s blue, bright summer. The camera cut away to the top of the Shard. It was not a boogie wonderland.

Rod looked down the barrel of the camera as he began to sing, his eyes staring deep into our souls. His voice was a full sail, a smooth jibe on a windy day. I began to feel bad for not giving a shit about the yachting. I regretted those crude jokes I’d made about grinding and trimming. Yachting is important, and I’d let the country down. Worst of all, I’d let Rod down.

Rod was crying, forever dying, but his eyes were still locked with mine. Suddenly, the years dropped away. It was 1975, Muldoon was in power and Rod Stewart was singing Sailing for the very first time. I wasn’t even born then, so I can’t explain it. It’s just the collective osmosis power of Rod Stewart being a New Zealand rock legend for so many years, I guess.

The dock, indeed, began to rock. The camera cut away from Rod (shock o’clock) to the crowds. “Can you hear me? Can you hear me?” Rod asked us, and at least five New Zealanders waved their hands in the air to say: yes, Rod, yes we can. We can hear you, we are flying, we are free.

Rod enjoyed his cruise down the Thames so much he started pointing out where Mildred the Guitarist lives, while a hemisphere away New Zealanders drank in the sun and almost swayed along. Some looked at their phone, others began to move their lips and jaws in unison, probably singing. By the second chorus, the fanzone was loving it. One brave woman waved her arms like she was flying. Rod was sailing into stormy waters but this woman was an angel, heaven sent to rock the dock, with arms for wings.

It was over too soon; health and safety laws mean we mustn’t rock the dock too much. “I thought that was absolutely excellent,” Rod said when he’d finished, and who could disagree? “Wow! Rod!” said Toni Street, capturing the voice of a nation, while somewhere in New Zealand, poor old Dave Dobbyn sat by himself, strumming his guitar and wishing he’d called ‘Whaling’ ‘Sailing’ instead.