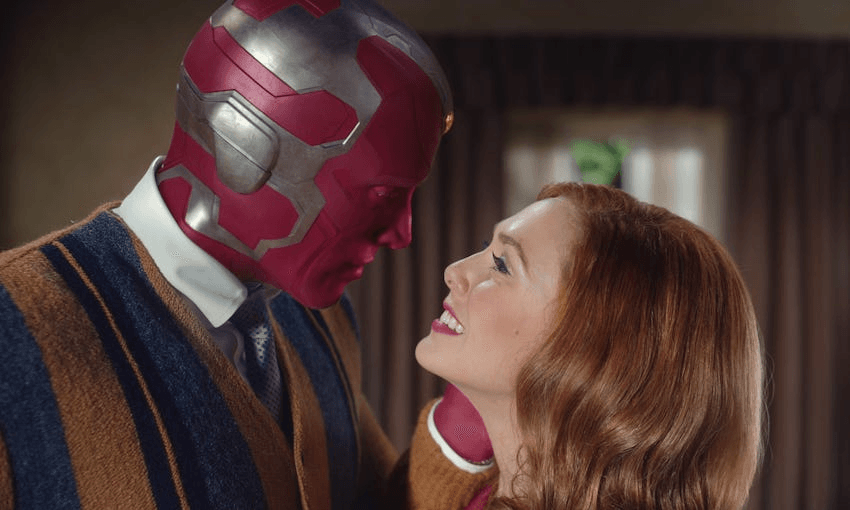 Vision (Paul Bettany) and Wanda (Elizabeth Olsen) are stuck inside… a 1960s sitcom? In the Marvel Cinematic Universe? Sure. (Photo: Disney+)

Review: WandaVision is the first artistic triumph of the Marvel Cinematic Universe

Vision (Paul Bettany) and Wanda (Elizabeth Olsen) are stuck inside… a 1960s sitcom? In the Marvel Cinematic Universe? Sure. (Photo: Disney+)

A tribute to the sitcoms of old? In the Marvel Cinematic Universe? Yup. Sam Brooks reviews the audacious WandaVision.

Nothing sends a chill up my spine like the phrase “Marvel Cinematic Universe”. Since launching in 2008 with Iron Man, the MCU has become a shambling behemoth, with over 23 films (not including a forthcoming 17) and 12 television series, all of them interlinked and telling one seemingly endless story. The franchise has swallowed up artists as quickly as it’s swallowed up viewers, with each new entry bringing yet another group of talented actors and directors chained to the homogenised behemoth, and I say that as someone who actually likes these films!

Unsurprisingly, when it comes to the Marvel Cinematic Universe, Marvel comes first. Artistry and creativity comes probably fifth or sixth, somewhere below “special effects” and “performative progressiveness”. Even when the franchise has moments of brilliance – the most Taika moments in Thor: Ragnarok, or Krysten Ritter’s bruised performance as Jessica Jones – they’re quickly brushed past by the audiences for whatever the new instalment is. It’s entertainment, pure and simple, and it does nobody any favours to pretend otherwise.

Which is all to say that WandaVision, the first proper MCU series to drop on Disney+, marks the first time that the franchise seems, at a cursory glance, to be putting aside the needs of the brand and letting the people shackled to it do some genuinely weird, audacious art. The premise is something that nobody would have expected, and frankly, nobody asked for: the series follows Wanda “Scarlet Witch” Maximoff (Elizabeth Olsen) and Vision (Paul Bettany) in the aftermath of Avengers: Endgame, but instead of living in a world where omnipotent beings try to destroy all of existence, they’re in an I Love Lucy-esque black-and-white sitcom, complete with big hair, beautiful gowns, and canned laugh track. As the series trucks along, their reality slowly shifts – to a 60s-style sitcom – and reports suggest that WandaVision will move through sitcom genres until they get to styles of the present day.

It’s the kind of project that a company can only really do when their brand has the kind of saturation that Marvel has, and they’re sure that fans will follow along with whatever they put out. A heartfelt tribute to the sitcoms throughout television history is not a concept that screams worldwide hit, especially for fans who are usually tuning in to watch their favourite actors pretend to throw laser beams at each other. This couldn’t be further from that stuff, and it’s so much more interesting for it.

Let me be clear: WandaVision is a tribute to these sitcoms, and each episode feels like it could sit inside a sitcom from that era. If that’s not your thing, this won’t be your thing, and this will be deathly unfunny to you. Even though the show is clearly setting up yet another entry in the franchise – Wanda’s heretofore unmentioned reality-shifting powers are getting their first screen debut – that feels secondary here. It’s genuinely mostly a tribute to the shows of many people’s childhoods, starring two of the franchise’s most underserved performers.

Elizabeth Olsen and Paul Bettany were two of the strangest absorptions into the MCU. When the former was cast as Wanda way back in 2012, she had little more under her belt than one highly regarded performance in an indie film, while the latter has spent most of his career being a brittle British dude in prestige films. Their work in the franchise thus far has amounted to tortured emoting and competent negotiation of special effects, and definitely nothing that would suggest they had the skill set to sell mid-century sitcom acting to a modern audience. But Christ, they have that skill set in spades.

Bettany is doing his best Dick Van Dyke impression here, delightfully mugging for the camera and slinging punchlines back and forth with Olsen like a seasoned Monty Python vet, which is especially impressive given he’s doing this while still playing Vision as an emotionally stunted android. Olsen has the harder job here, though. She has to radiate the charisma of a sitcom star while still paying true to the frankly dour Wanda that the MCU has given us, and play the layers of her character shifting between believing in the reality she’s created, and the reality rejecting her entirely. She’s the glue that holds this bizarre endeavour together, and this seems like a just reward after having been sidelined for nearly a decade in the world’s biggest film franchise (and let’s play the world’s smallest violin for that punishment).

Perhaps the saddest thing about WandaVision is that it’s the first MCU product I’ve watched, with the exception of Jessica Jones, that actually has an appeal to people who don’t give one flying cape about Marvel. There’s a genuine love for the genre that absolutely oozes off the screen, thanks to director Matt Shakman, who has directed many sitcoms (and also some Game of Thrones, weirdly). This isn’t just a cheap sitcom tribute where they’ve filmed a few old sets in black and white and called it a day; the episodes have the very specific rhythms of these sitcoms, where they had to pause for laughter and exaggerate themselves. It’s easy to poke fun at old sitcoms, but they also had a massive, earnest heart that can be missing from today’s comedy, which leans into cynicism. WandaVision is bursting with heart, and it has the talent both on and offscreen to carry it over the line for a modern audience.

It remains to be seen whether WandaVision can go the distance – reviewers were only given three episodes out of nine to review – and if the consummate joy of its sitcom tribute can withstand the struggle of fitting into a franchise whose idea of humour, somewhat ironically, sits closer to the punchlines from a bad episode of Friends than actual comedy. But so long as it lets the titular characters strut their stuff, somewhat indulgently, it’ll remain a goddamned delight.

The first two episodes of WandaVision drop today on Disney+, and weekly on Fridays afterwards.