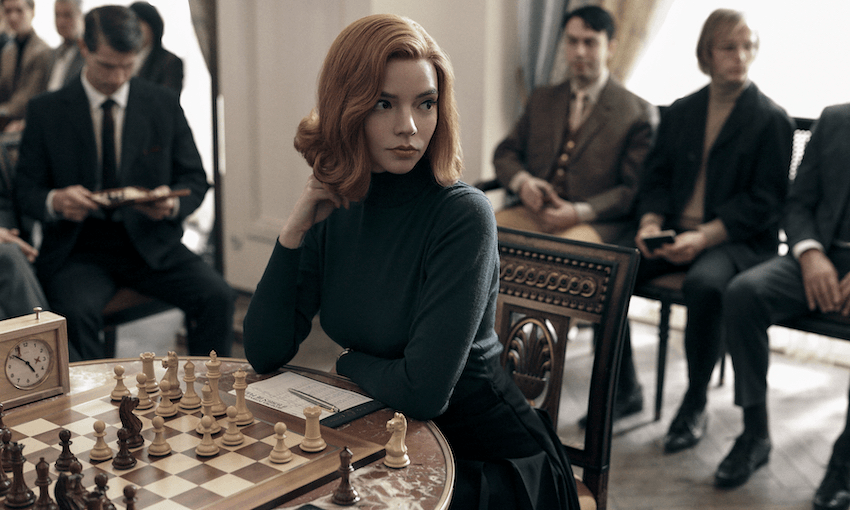 Review: The Queen’s Gambit is popcorn fun wrapped up in prestige regalia

It seems everybody is watching The Queen’s Gambit. What is it about the Netflix series that is so damned compelling?

Let’s be real for a moment: for most of us, unless you’re the one playing it, chess is incredibly boring. It is about as aurally and visually stimulating as watching beige paint dry on a white wall. Despite this, the game has been the focal point of a truly bizarre amount of media, including a truly bonkers musical, an award-winning novel, and now a limited Netflix series based on that novel. Even more incredibly, that Netflix series isn’t just interesting, it’s really, really good.

Considering who is involved with The Queen’s Gambit, maybe that shouldn’t be a surprise. Scott Frank, the series’ co-creator alongside journeyman screenwriter Alan Scott, has made a career out of subverting audiences’ expectations. Frank’s first major success was Out of Sight, a jazzy Elmore Leonard adaptation that delivered us career best performances from both Jennifer Lopez and George Clooney, and more recently he’s written Logan, a mournful twist on superhero films, and Godless (also on Netflix), a feminist revision of the masculinity-dominated Western genre. The one consistent thing through all of these projects? They’re highly watchable beasts, with vivid characters, beautiful aesthetics, and cutting-edge style.

And now, The Queen’s Gambit. Given the show’s popularity with audiences over the past month (it’s remained near the top of Netflix’s chaotic top ten), in spite of its subject matter, it shouldn’t be surprising that The Queen’s Gambit is a resounding creative success, if not an unqualified triumph. The show, lead by rising star Anya Taylor-Joy, a British-American actor with the biggest eyes this side of Emma Stone, is the story of Beth Harmon who becomes a chess prodigy after being taught the game by a janitor at the orphanage where she lives. While she beats her competitors with almost comical ease, her road to chess success is a sometimes rocky one, plagued as it is with addiction issues and, you know, being a woman in misogynist mid-century America.

The show’s triumphs come not from its plot, but from the fact that it’s so immediately gripping, and remains so for its entire seven-episode run. The production is designed within an inch of its life, each set looking like a glamourous real estate ad, and each costume looking like it came off a 1960s runway. Frank, who writes and directs every episode, stacks them with zinger lines and little visual flourishes, especially in the chess scenes. The editing and structure of every game makes it feel less like watching two people sit across from each other, thinking hard, and more like a choreographed dance. A scene in the third episode, in which Beth slowly figures out she has a crush on her competitor, is so charged that you can’t take your eyes off the screen. Frank does the impossible: he doesn’t just make chess interesting to watch, he makes it can’t-tear-your-eyes-away compelling, investing these games with stakes that pay off beautifully for the audience.

It’s not only Frank doing the heavy lifting, though. He’s assembled a cast that makes an indelible impression, from newcomer Moses Ingram as Jolene, Beth’s childhood best friend to former child star Thomas Brodie-Sangster as, somehow, a hipster douchebag chess pro. As Beth, Taylor-Joy delivers her second star making performance of the year – after a fabulous turn as Jane Austen’s Emma – and creating a more complex character than just another troubled genius. While the show never noisily makes chess a metaphor for anything, Beth’s immense, instinctual skill  is her guiding philosophy through life. It gives the character a feline quality: always guarded, ready to jump, and, as she grows in confidence, ready to lash out and defend herself. Her performance is what gives the series its energy. We’re as invested in Beth, and her life, as she is.

On the flipside of this is Marielle Heller’s brilliant, sad performance as Beth’s adoptive mother Alma. Heller, who directed the excellent Can You Ever Forgive Me? and the heartfelt A Beautiful Day in the Neighbourhood, brings the same sensitivity to Alma that she did to those films. It’s a performance quite unlike any I’ve ever seen. Heller takes the stereotype of the buttoned down, suburban housewife and flips it on its head; she’s downcast without being defeated, and sharp without being brutal. Her Alma is tragically full of need, and when she sees an avenue – Beth’s emerging career as a chess prodigy – to fulfill that need, she jumps on it. The relationship between the two is one of the more enthralling aspects of The Queen’s Gambit, not quite the relationship between a parent and child, but more a symbiotic relationship of two broken people making each other whole.

The Queen’s Gambit’s greatest asset is that nothing about it is quite expected. Events unfold in a way that’s twisty without being full Shyamalanian. Obviously, the plot is the work of novelist Walter Tevis, but Frank’s adaptation makes it feel fresh in a way that a 35 year old novel just shouldn’t. Every scene feels like its own little pop song, whether it’s Beth bantering with her defeated foes or reasserting her value to the adoptive father who abandoned her. The Queen’s Gambit is full of hooks in a way that few shows are, making it genuinely fun to watch.

That’s the one strange swerve in a production that’s more assured than any I’ve seen in quite a while. There’s no doubt, for even one moment of its screentime, that The Queen’s Gambit is exactly the show that Scott Frank wanted to make: another striking subversion of a genre that is all too familiar, and a shot of adrenaline into a game that all but a small group have written off as boring. If the series’ appeal may prove a little ephemeral does it really matter if it’s this enjoyable in the moment?

The Queen’s Gambit is available on Netflix now.