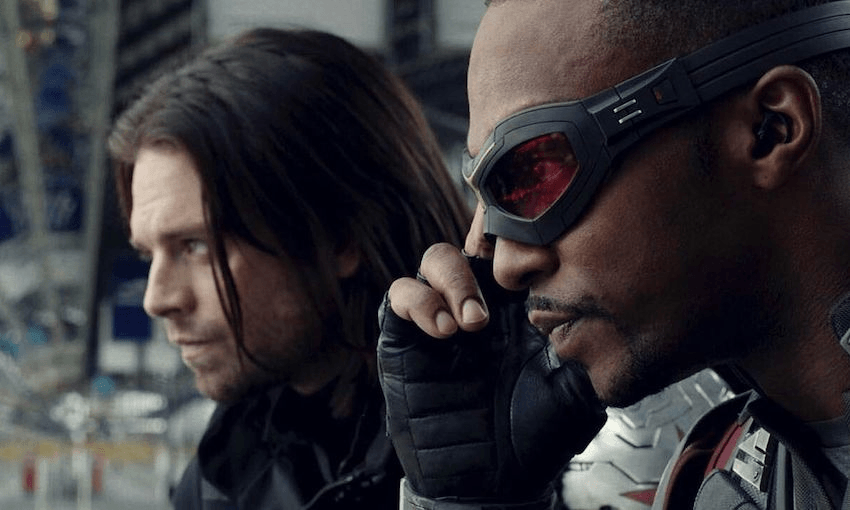 Sam Wilson aka Falcon (Anthony Mackie) and Bucky Barnes aka The Winter Soldier (Sebastian Stan) are the protagonists of Disney+’s new Marvel series.

Review: The Falcon and the Winter Soldier wins big by going small

Sam Wilson aka Falcon (Anthony Mackie) and Bucky Barnes aka The Winter Soldier (Sebastian Stan) are the protagonists of Disney+’s new Marvel series.

The second Marvel show to arrive on Disney+ again pumps the brakes on narrative to explore the characters at its centre, writes Sam Brooks.

Marvel is running on a high right now. WandaVision wasn’t just critically acclaimed, but also arguably the biggest television series of 2021 thus far, despite being the most experimental, audacious thing the Marvel Cinematic Universe (MCU) has ever done. Early trailers for The Falcon and the Winter Soldier, on the other hand, indicated it would be a return to MCU business as usual. That it would be more fighting than feelings, more punches than pathos. Those early trailers were about as misleading as some of the red herrings in WandaVision, to put it cynically.

Perhaps what’s most surprising about The Falcon and the Winter Soldier is that, as with WandaVision, it’s not really like anything else in the MCU. The series is focused less on tying it into the bigger franchise, and much more on digging into the psychologies of the now-deceased Captain America’s closest allies, Sam Wilson (Anthony Mackie) and James “Bucky” Barnes (Sebastian Stan), as they grapple with the aftermath of Avengers: Endgame and the “blip” that saw half the world’s population disappear for five years.

Sam Wilson’s mental roadblocks are centred largely around the struggle between his role as a hero, and his race. Despite being given Captain America’s shield by the man himself at the end of Endgame, Wilson doesn’t feel comfortable accepting the mantle, and the series dives into the implications of what it means to be a Black man asked to represent and defend a country that doesn’t represent him. He’s still a superhero, of course, using his skills to investigate an anti-patriotism group called “The Flag Smashers”, but that plot feels a like an obligatory backbone, rather than the meat of the series. The show is more interested in what’s going on inside the Falcon than the suit he’s wearing on the outside.

Meanwhile, Bucky Barnes is dealing with, uh, a lot of shit. He’s a 100-year-old war veteran who spent a lot of the past decade brainwashed by the very organisation (Hydra) that his old best friend, Captain America, was fighting. On top of that, for the past five years he literally did not exist, and is only allowed to roam freely because he was pardoned for his past (brainwashed) crimes. He’s a shell of a person, as we see when he goes on a fumbling sort-of date with the daughter of one of his neighbours. He can barely get through a conversation – how the hell is he meant to navigate the world of online dating?

This isn’t the stuff that the MCU is really used to investigating; there’s often too much plot to work through to dive too deeply into the psychology of anybody except maybe Iron Man (RIP). The closest the franchise has come to this sort of territory is Netflix’s Jessica Jones, which was built around that character’s PTSD. The Falcon and the Winter Soldier’s psychological focus is a calculated gamble and one that pays off, with the two leads rising to the occasion, having been given little to do for a decade other than pretend a green screen is not a green screen.

There are two scenes that define what this series is going to do. In an early scene, Bucky cages up when his therapist (Amy Aquino, stunning) tries to probe into what might be causing his nightmares, which any casual MCU watcher will realise are not so much nightmares as re-emergent memories. It’s an understated scene that slowly teases out the ways that Bucky interacts with the world. We see more of the character here than in the five films he’s been in so far, and start to understand the weight he’s been under. His therapist sums it up at the end of the session: “After all that fighting, what do you want?”

Towards the end of the first episode is other standout scene, where Sam and his sister Sarah (an incredible Adepero Oduye) are applying for a bank loan. It brings the drudgery of being a superhero to the forefront; Sam calmly explains that no, there’s no sort of superhero fund, just goodwill, and that the reason he has no income is that he literally wasn’t alive for five years. The snivelling bank manager ticks all of the bad boxes – asking for a selfie with them, vocally blanching when Sarah references her Blackness – before ultimately turning the pair down. Being a hero might save the world, but it doesn’t pay your rent.

These are scenes that you wouldn’t get in the movies, and they’re clear indicators that Marvel is taking this pivot to TV seriously. Neither WandaVision nor this series are constructed as nine-hour-long movies; they’ve got clear, plotted arcs that build and resolve. WandaVision was an excellent first foray into this territory, and The Falcon and the Winter Soldier seems set to continue it.

It says a lot that the least compelling part of The Falcon and the Winter Soldier is the big action scene it opens with. It does little to set the show up, except for re-establishing the abilities of The Falcon: essentially, he flies around and shoots things, but not in the same way Iron Man does. It’ll be frustrating if this series buckles under the requirements of the MCU, as WandaVision inevitably did in its light-show finale, because the action scenes here employ the same uninspiring competence as the MCU movies. They feel like scenes that anybody could have shot; like watching a child smash their favourite fancy toys together. Instead it’s the emotional subtlety of The Falcon and the Winter Soldier that gives the show not just its appeal, but its power. We already love the characters, now it’s time to understand them.

The first episode of The Falcon and the Winter Soldier drops tonight on Disney+.