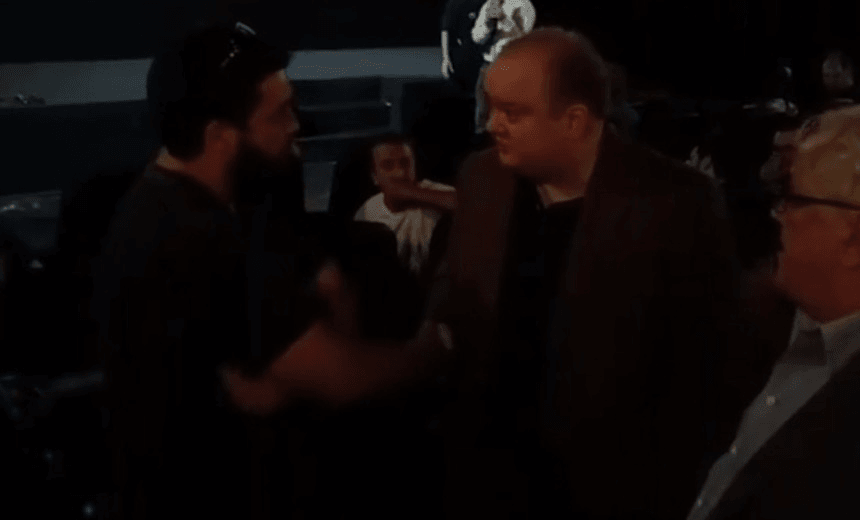 It just gets weirder: watching David D’Amato’s bizarre appearance at a ‘Tickled’ screening

David Farrier and Dylan Reeve’s Tickled had its most gonzo moment yet when two of the film’s subjects dropped in for the Q&A. Joshua Drummond watched the chaos unfold on Facebook Live.

“When the going gets weird, the weird turn pro.” David Farrier and Dylan Reeve are living the truth of Hunter Thompson’s famous saying after a Q&A session for Tickled was visited by the subjects of the film. Tickled investigates the world of “competitive endurance tickling”, and becomes embroiled in lawsuits and fake identities and generally becomes pretty damned sinister, and yesterday’s events were absolutely of a piece with everything we know about the weird, shadowy world of Jane O’Brien Media.

Warning: minor Tickled spoilers follow. Also, if you haven’t yet seen Tickled, what follows may make very little sense. I found it absolutely fucking bonkers and I’ve followed the whole thing from the beginning.

I was at home, happily playing a new survival horror video game to review for The Spinoff’s gaming section, when my wife yelled from our room that the people from Tickled were on a Facebook Live event. I turned off the game and saw this:

It was just before the end of Tickled’s LA premiere, and who should visit but Kevin Clarke. Kevin’s a star of the film – he’s one of the Jane O’Brien Media (the outfit who produce the tickling videos that David spotted back in 2014) employees who come to New Zealand early in the piece.

Kevin and Dylan have a confrontation in the foyer, which is filmed sideways for a while. This is very fitting for the absolutely bizarre conversation that follows. It looks like Magnolia Pictures came prepared for Facebook Live but it takes them a while to get the camera up the right way.

“Why did you call police on me at Sundance?” Kevin demands. David’s response: they didn’t – Sundance staff noticed Kevin there and called the police themselves.

The camera gets turned up the right way around the eight minute mark and Kevin just doesn’t stop talking. He’s been talking a lot online too, at a new website that he’s set up apparently to attack Tickled.

He’s also helped a mate write a loopy review of Tickled for examiner.com.

“The film is a piece of garbage full of lies,” Kevin says. After 16 minutes of a frankly exhausting back-and-forth, Tickled finishes its screening and Dylan heads in for the Q&A. But there’s a surprise awaiting. “In, uh, unprecedented fashion, some of the, uh, people from the film… are here,” says an announcer.

The special guest is David D’Amato.

If you’ve seen Tickled, this should freak you the hell out. If you haven’t: imagine being in the cinema watching Blackfish, only to discover either uniformed Sea World reps or the orca sitting next to you. It’s like that. Dylan walks down the aisle to meet D’Amato, who grasps him in what looks like a firm handshake. They don’t let go. There’s a bunch of inaudible stuff before the mic catches up.

“You can’t talk to me in California?” asks Dylan. “It’s illegal for you to talk to me?”

D’Amato says something I can’t catch.

“Oh, we are filming in here,” says Dylan.

“Are you aware of the [inaudible] LA legislation?” D’Amato asks.

“We can. It’s a private space, we have permission from the owners.”

D’Amato burbles a bit more legal-sounding gibberish. Dylan tells him – not in as many words – that it’s gibberish. “You’re going to tell a New York attorney what a felony is in his own country?” D’Amato asks. He slaps Dylan on the shoulder, twice, still holding his hand.

“You’re not a member of the Bar,” says Dylan.

“I certainly am able to practice law.”

“You’re not admitted to the New York State Bar.”

“How about other states?”

“I dunno, I couldn’t find any that I looked in,” says Dylan. They’re still shaking hands, with the occasional perfunctory pump. The entire audience is watching, some twisted right around in their seats, many with their phones out, filming. D’Amato finally lets go.

“What I wanted to do is wish you all the success possible, because it’s gonna be a good ride,” says D’Amato.

The Q&A follows, which D’Amato opts to watch. The session features a few fairly normal questions from the audience, but it’s dogged by Kevin, who proceeds to screech irrelevancies and monopolise most of it, evntually prompting a weary cinema-goer to moan “SHUT UUUP!” The whole thing is well worth a watch, particularly if you’ve seen Tickled. There’s a lot more at Magnolia Pictures’ Facebook page. After the film, D’Amato takes the opportunity to level a few semi-veiled legal threats. David Farrier, who was in New York for a different screening, made a transcript of it.

Here’s my take on it: Kevin Clarke is being absolutely fucking ridiculous. He’s fixated on what he sees as a breach of ethics by David and Dylan; mainly that they used footage from his tickling films in Tickled, paid some interviewees for their time, and used hidden cameras – all of which are essential to the successful practice of investigative journalism. And David D’Amato is, in my honest opinion, being creepy on an order of magnitude that doesn’t really scale unless you’ve seen the film.

Both of them, hilariously, utterly ignore or avoid the central allegations of Tickled: that David D’Amato impersonated multiple people, stole identities, committed fraud, and has for years harrassed many tickle-video participants via smear websites, as well as a host of other charges.

The evidence of all this activity, as shown in the film, is flat-out undeniable. Both Clarke and D’Amato – in my own, private, non-expert opinion – display in their appearance at the screening the same arrogance, combined with a sketchy grasp of the law, that the film documents so well. These characters are much of what makes Tickled such a compelling film, and this latest development will have many more people wanting to see it. If you haven’t already seen it, don’t miss it. Like D’Amato says, the choreography is great.

Watch the whole crazy confrontation below.

Disclosure: Joshua Drummond did research work for the project that became Tickled. You can read about it here.

Joshua Drummond, an early participant in the saga that became Tickled, recounts the journey down the online rabbit hole that led to the making of the acclaimed documentary.

What’s it like to turn 21 in the middle of a pandemic?

Two 2000s babies talk about how they celebrated and what the milestone meant to them.
By Sam Brooks
Staff feature writer