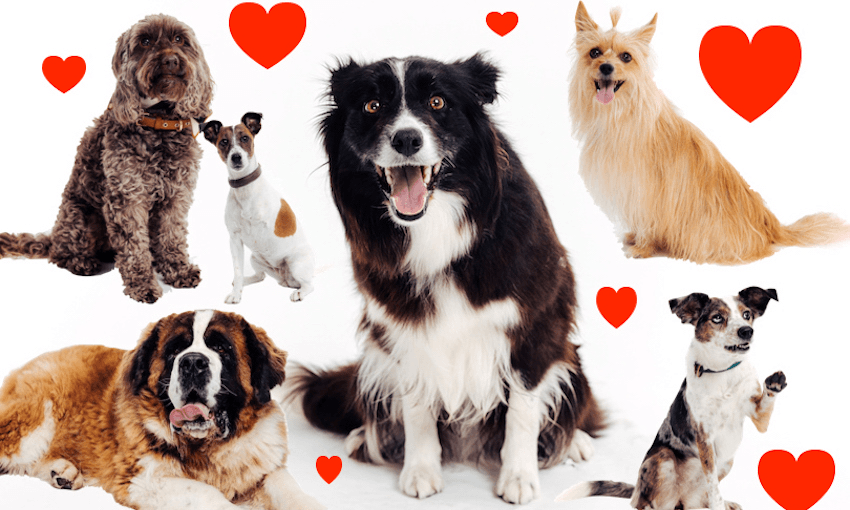 They’re competing to be named top dog, but they’ve already won our hearts.

Nothing brings the nation together like a good dog. Ask Spot or the SPCA dogs that learned to drive, or even John Campbell and Matty McLean speaking directly to the good dogs of New Zealand, live on Breakfast television. Tonight, new reality TV competition Dog Almighty begins its search for the country’s most talented pooch, in the hope of finding out once and for all which New Zealand dog is the goodest dog of all.

Presented by Jono and Ben, Dog Almighty will put 70 dogs and owners through a series of tricky and ridiculous challenges to test agility, obedience and x-factor. The pets will be pushed to their limits in a purpose built ‘Doggy Dome’, where they’ll be assessed by a team of celebrity judges and supported by sideline hosts Athena Angelou (Flava, Celebrity Treasure Island) and an expert dog trainer named Doggy Dan. The dogs will play rugby. They’ll play the piano. They’ll probably do a lot of sniffing, and things are going to be tense.

What happens in the Doggy Dome stays in the Doggy Dome, but I’m guessing that as the competition ramps up and dogs start getting sent home, nerves will be high. Some pooches will crack under the pressure. Someone will call someone else a bitch and there’ll be paws at dawn, but the last dog standing will win a gold feeding bowl and their owner will get $100,000, which seems an entirely fair and equitable way of splitting the prize.

Who are these brave hounds seeking glory in the Doggy Dome? Basically, they are the best creatures among us. They find people lost in the bush, they help their owners recover from illness, and one of them snores like a pig. Some are agility experts, others are new to competition, but whatever their skill and experience, the emotional bonds between Dog Almighty’s owners and pets will fill the weariest of hearts.

Like The Bachelor about to meet his potential brides, it’s time for us to meet some of the dogs of Dog Almighty. Prepare to fall in love at first sight, because these glorious creatures don’t care about the election result, or Covid-19, or whether or not they can actually play the piano. That’s why they’re good dogs, and whatever else happens in 2020, we will always have the good dogs of Dog Almighty.

Echo’s biggest strength is ‘her love of treats’, which is also my biggest strength, so we’re all winners here. Tragically, Echo’s owner reckons they have little chance of success on Dog Almighty, due to Echo having no experience in all the things they’ll be judged on. A literal underdog, if you will.

Fit as a fiddle, sharp as a knife. Pixie became internationally famous during lockdown when she learned how to perform CPR on her owner Tania, so you may as well just give her that golden bowl right now. A dog saving lives, one slobbery kiss at a time, as we live and breathe.

Maisy’s owner Rachel reckons she’s a doggy inspiration, because Maisy gives everything 110% despite having three legs. “I wanted to show people what she could achieve,” Rachel said of her reason for entering Dog Almighty. I know we’re not supposed to play favourites, but Maisy, I think I love you.

Not only is Josie the biggest dog in the competition, maybe even the world, but she “snores soooo loudly and sometimes sounds like a pig”. Same, Josie, same.

Hello, chocolate lovers. Owner Scarlett calls Coco her soul mate, because she’s cheeky and opinionated and loves running through tunnels. Let’s be honest, that’s what we all want in a soul mate.

Don’t let Bo’s tiny size fool you, and definitely don’t fall for the charms of that tiny ponytail on her head. Bo might be the smallest dog in the competition, but owner Louie says she’s definitely not “a handbag dog”. As if we’d even think that Bo, you absolute beast.

Best mates Red and owner Barry are search and rescue legends, used to rescuing people in high pressure situations. Sure, saving lives is important, but will Red be able to bust out Chopsticks on the Doggy Dome piano? That’s the pressure situation I’m here for.

Rufus and owner Laurelin have a tight bond, which was formed when Rufus helped Laurelin recover from serious surgery. He also arguably has the best tongue in the competition, and is definitely a good dog.

Dog Almighty screens on Monday and Tuesday nights on TVNZ 2 from 19 October.