He’d given up on television, but then an incendiary freestyle rap battle on Taskmaster NZ helped thrust David Correos towards the mainstream, a place the comedian never thought he’d be. He tells Chris Schulz how it happened.


It was nearing the end of a long day. Nine hours had been jammed full of mischief and mayhem, the hi-jinks of five contestants being filmed in a Riverhead house for the popular TVNZ 2 comedy show Taskmaster NZ. David Correos, a Christchurch-born, Auckland-based comic known for his surrealism and extremism, was ready to switch off.

“I was so tired,” says the 28-year-old. “I’d finally hit the peak of the day.” He was looking forward to going home and relaxing: Correos had a prolapsed disc in his back, and he was taking seven different types of pills to dull the pain. His injury was so bad that when the show finished filming, he booked in for surgery.

Then he spotted the day’s final task buried in a giant bowl of spaghetti. It read: “Create a diss track about the members of the other team.” His brain flipped into overdrive. Something snapped. “I knew if I was to do it half-arsed, I’d regret it,” says Correos, who was teamed with fellow contestants Laura Daniel and Guy Montgomery in a hip-hop battle against Urzila Carlson and Matt Heath.

Two years of stoner rap skills, honed every Friday night for laughs over a few joints with his flatmate, came to fruition. “All of a sudden this energy came out of nowhere,” he says. “I thought, ‘Come on bro, you have one chance to do this. You might as well have fun with it and go as hard as possible.'” David Correos loses himself in the music, the moment. Screengrab: TVNZ

The results will surely be among the year’s finest local TV moments. Across a dozen instrumental drum tracks, Correos delivers rhymes off the top of his dome, freestyles which land with increasing intensity and velocity. He drew on years of experience performing live comedy shows so random even he couldn’t predict the outcome.

“I feel like there’s a lot of comedy in the unknown,” he says. “You’re not searching for the gag. You’re just putting yourself in a compromising position where you’re going to embarrass yourself.” For this task, Correos thought: “If I go hard with the violence, and I go hard with the intensity behind it, something dumb will happen.”

It worked. Correos rapped about running over a cat, hanging Heath from a beam, and danced while yelling: “Fuck Urz! (Urzila)” Via email, Montgomery remembers Correos looking for cheese to grate on top of a bowl of spaghetti in a nearby kitchen when he heard an instrumental he liked. He sprinted back into the room and spat out lyrics about breaking someone’s nose.

“It was honestly close to the funniest I’ve seen a person be,” says Montgomery. Alongside Daniel and co-host Paul Williams, he watched Correos with a look of awe and fear spread across his face. “We couldn’t really handle it. You can’t do anything in that situation other than keep trying to encourage that person and give them the space to keep being funny.”

In the clip, Correos reaches his crescendo while balancing a bowl of hot spaghetti in his hands. Over an otherwise perky drum loop, his raps are nasty and vile. He looks like he means it. “Imma drown you / In your own blood,” he spits, “Face down in your own blood now.” Watching the insanity escalate is immeasurably hilarious. That moment is among many of the highlights that has turned Taskmaster NZ’s second season into unmissable television. Every contestants commits, but none more so than Correos. “He was so keen to entertain everyone that he would be pumped up and out of breath before he even read the tasks,” says Sam Smith, a writer who honed the challenges and frequently visited the set.

He once found Correos googling, ‘How to be a good Taskmaster contestant’ in his dressing room. “I think David’s line of how far he’ll go is a leap further than everyone else’s.”

Fans seem to agree. Twitter is awash with Correos stans saying things like, “David Correos is a one-man meme army,” and “He loses his shit every week and I am 100 per cent there for it.” Others want more from him, like this message from a suitor: “Where is David Correos and does he want a wife?” When the country went into lockdown on Wednesday, Wellington writer and comedian Eamonn Marra requested TVNZ screen, as a special treat, “unedited bloopers of David Correos for the next four weeks”.

On Thursday, things escalated. A Reddit post suggested Correos “might be in contention for the best Taskmaster contestant” ever – including from the version of the show in the UK, where it originated, is up to its 11th season and regularly turns participants into stars. “I can still feel the pain in my sides that laughing at him … caused,” says the thread’s author. It was upvoted by 97% of readers.

Correos, though, isn’t as proud of his antics. Lately, he’s been trying to smooth his rougher edges. After spitting out all those despicable rhymes, Correos had a change of heart. “I have this thing I call ‘delayed regret’,” he tells The Spinoff on a Zoom call from the hallway of his Royal Oak flat where he’s spending the latest lockdown. “In the moment, I’m really enjoying it, it’s really fun. It’s usually 12 hours later or when I finally get time to myself, (I think), ‘Oh no – what did I do?!’ I started spiraling.”

So he called producers and pleaded with them to edit out the worst parts of the dozen freestyles he’d performed. When it came time to film the live segment of the show, Correos bought meat packs to gift Carlson and Heath. “I wanted to get them some kind of apology hamper,” he says. “Meat pack is where we ended up.”

Correos’ sudden burst of popularity is a complete surprise to him. Last year, he’d given up trying to break into TV. Instead, he focused on refining his performances and improving his writing. Streaming provided him with an alternative outlet. He wanted to prove he could connect with audiences without being outrageous.

“I realised I wasn’t doing it because I was enjoying it. It was, ‘How do I top myself?'” he says. “I like to be one step ahead of what the expectation is. If you expect me to be extreme, I’m not going to give it to you. I’m going to give you something else.” His style had become too much – even for him. 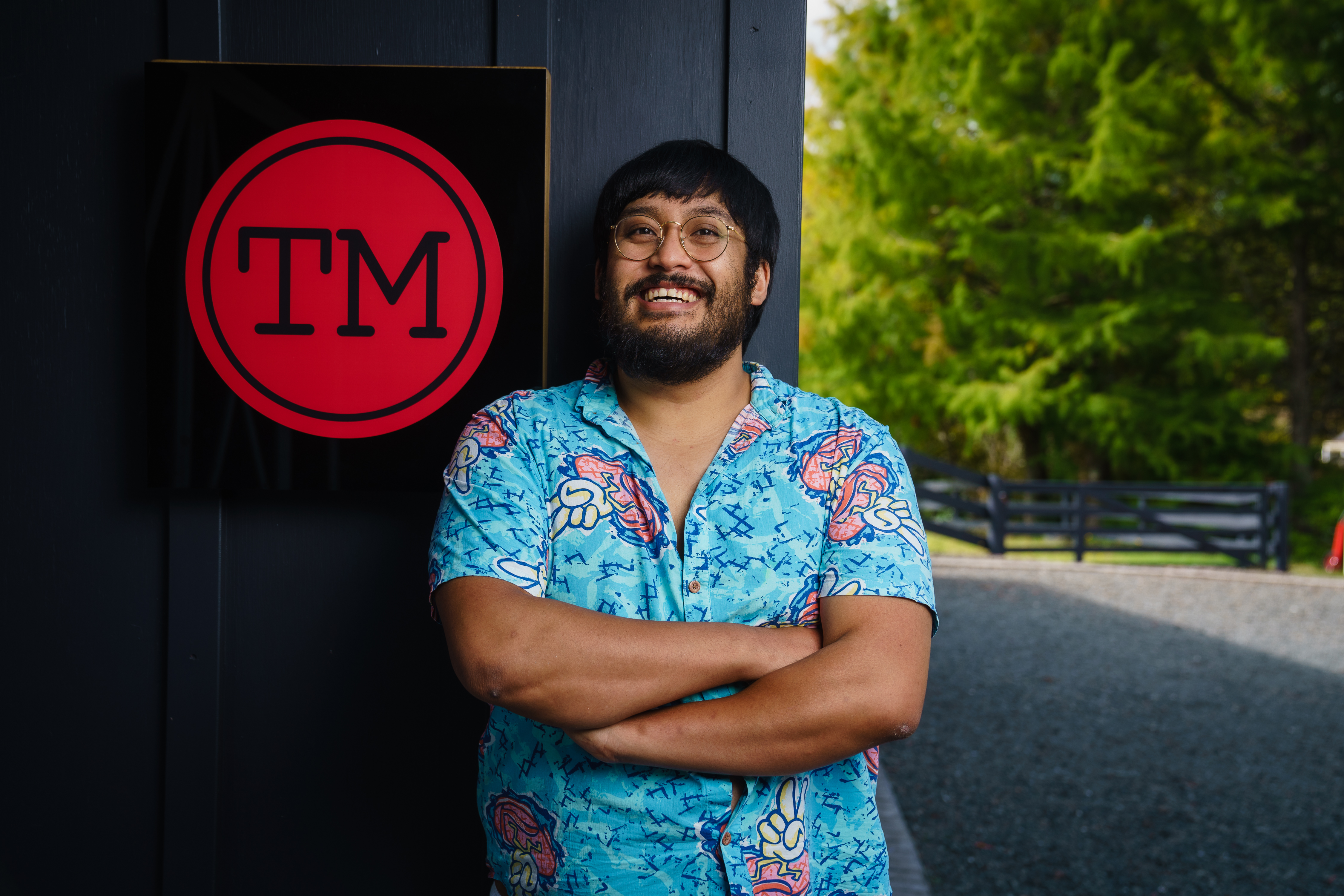 Stories about his past performances have become legendary. When he won the Billy T James comedy award in 2016, Correos stripped to his underwear just for fun. “That was the gag that got me the most laughs,” he says. “I was the guy who didn’t mind taking his clothes off.”

At one show at defunct Auckland bar Golden Dawn, he ended up on the top of the bar dressed as a cat, pretending to expel a fur ball. During research for this story, I heard about another show that, within moments of starting, found Correos naked, covered in slime while holding a knife. He can’t remember it, but admits: “There were crazy gigs.”

His big TV break came out of nowhere. When Taskmaster NZ’s first season aired last year with a different cast, Correos was invited to be an understudy. His task was practising the show’s live elements before they were unveiled to contestants. During one challenge involving popcorn, he stunned producers by screaming at ear-piercing volumes. Afterwards, they asked if he’d be interested in appearing in the second season. He replied: “Taskmaster isn’t what I planned but cool. I’d be down for this.”

His popularity has grown steadily over the course of the season. Fans spend time debating their favourite Correos moments. There are many. In one task, he opened 141 tins of tomatoes and tasted them all, the acidity burning the roof of his mouth as he searched for the single one containing baked beans. In another, he slurped up sunscreen and spat it as far as he could.

During Wednesday night’s episode, he served Williams tea while dangling upside down from a ceiling beam. He was also locked inside a caravan for more than an hour, the sides nearly bursting out with his energy. Correos has been consistently hilarious. Yet he says the show’s other contestants intimidate him. “I see people who are very good at what they do,” he says. “You hear all those laughs that they’re getting. (I think), ‘Oh no, I can’t keep up. I’m no good.'”

He also worried he was returning to his old tricks. When a light blacked out during a challenge that asked contestants to ‘transform the room,’ Correos took mere seconds to remove all his clothes and pose seductively on a table top. When the lights came on, he got the reception he wanted, but kept asking himself: “‘What are you doing? You’re going back to your old tricks, mate. Who are you, David Correos from three years ago?'”

Lately, though, he’s realised he can accept all parts of his personality. He can be funny, clever and extreme, depending on the situation. Last weekend, before the country went into lockdown, Correos performed his first live show since Taskmaster NZ started airing. He’d been recovering from back surgery, and had spent months laying low. He’d barely left the house.

When he got to his Devonport gig, someone recognised him on the street. “It was the first time I’d had someone feel like they really know me,” he says. “They started slapping me and hitting me.” He’s not complaining. The gig went well. Afterwards, he pondered what it might mean. “I think they were trying to match my energy,” he says. Then he realised: “Oh … I’m at that level … People hit me now.”

Taskmaster NZ airs on TVNZ 2 on Wednesday nights and streams via TVNZ OnDemand. David Correos can be found on Twitter @dlcorreos.