Call 111 and ask for the clothes police, because this week Hilary Barry wore a pink top on TV that made people mad again. Tara Ward takes a deep dive into the TVNZ journalist’s highly controversial wardrobe.

There was nothing unusual about Monday night’s episode of Seven Sharp, unless you think women shouldn’t have shoulders. Hosts Hilary Barry and Jeremy Wells introduced stories about tropical fruits and a Dunedin student’s new eco-business, and joked and japed together like always. Viewers, however, only wanted to talk about one thing: what Hilary Barry was wearing. It’s not the first time a Seven Sharp viewer has shamed Barry’s appearance on social media, and you can bet your exposed shoulder it won’t be the last. It seems there will always be people outraged that an intelligent middle-aged woman can appear on television five nights a week, wearing clothes every time. I agree, it’s scandalous. Who do women think they are, with all their girl skin and breasticles, popping up in public like they don’t give a shit what anyone else thinks? 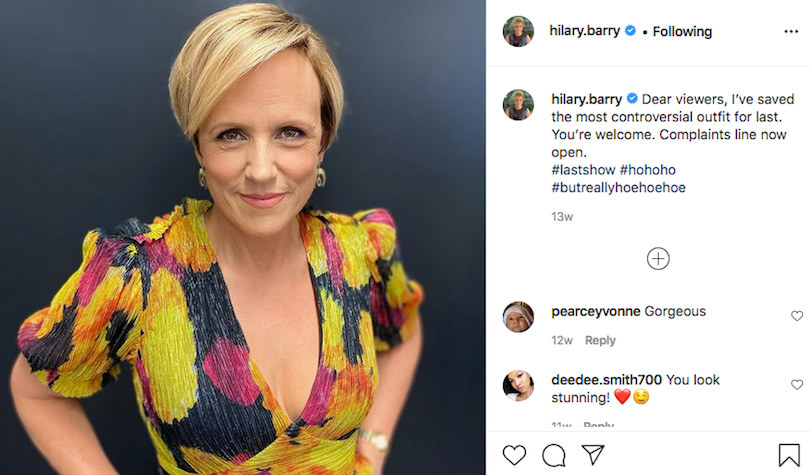 Barry refuses to entertain any crappy feedback about her clothes or body, and there’s no shortage of news articles celebrating her succinct and empowering responses. She calls the commenters out for exactly what they are: sexist, ageist, and filled with a misogynistic distrust of floaty fabrics. These complaints and Barry’s responses have become so legendary that they’ve even been immortalised in a Stuff Daily Quiz question, and the sooner these first three options become law, the better. But what exactly is Hilary Barry wearing that gets everyone’s knickers in a knot? Gird your loins and clutch your pearls, because we’re about to take a tense stroll through the most shocking collection of clothes you’ll ever set eyes on. Prepare yourself, you’re about to be outraged. 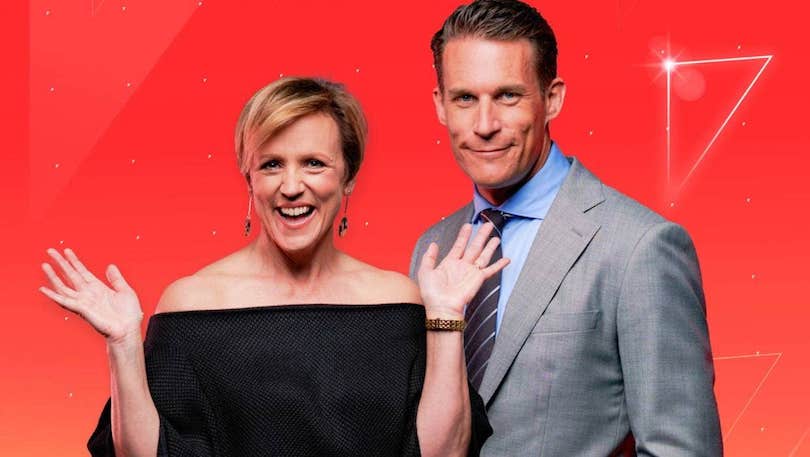 SHOULDERS ARE FOR AFTER-HOURS ONLY. PHOTO: TVNZ

Shoulders! Arms! Open palms! There’s so much flesh on display in this Seven Sharp publicity shot from January 2020 that it’s no wonder viewer Jocelyn was steaming mad. Jeremy quietly flaunted his wrists at the nation, but Jocelyn couldn’t get past Hilary’s bare shoulders. They sat brazenly on top of Hilary’s arms, no doubt burning themselves into Jocelyn’s retinas until she could see nothing else.

“It is time Hilary acted and dressed to her age,” Jocelyn told Seven Sharp’s social media. “Off the shoulder clothing is for YOUNG WOMEN not old women, it makes her look like a street worker.” Collarbones are private! Shoulders are strictly for after-hours! Where’s a jaunty Live Laugh Love onesie when you need one?

“We are being assailed with more and more of Hilary in low cut tops exposing her cleavage,” irate viewer Barb told Seven Sharp in May 2019, after Hilary unleashed this shocking top onto our eyeballs. “It is a fact of nature that women’s breasts are sex objects and should be kept private except at the beach or at an evening do.”

Kept private, except at the beach or an evening do. Put it on my gravestone, tattoo it across my heart. There’s a lot to unpack here, because if Seven Sharp isn’t an evening do, then what is? Hilary shot Barb down with “they’re just boobs”, providing us with another handy fact of nature to use at both the seaside and an evening soiree. Nothing irritates viewer Ken more than a woman wearing a shirt that appears to have been purchased from — I can barely write the words — a second hand shop.

Look, maybe the “Op Shop” Ken was referring to was the New Zealand band from the 2000s who had a hit song ‘One Day’, which NZ Post later used in a series of emotional TV ads that made us cry. Maybe that’s why Ken’s having a waaaah over Hilary’s wardrobe, because her shirt inspired him to get in touch with his emotions. Maybe “get some style advice, girl!” is angry man code for “thank you for letting me be me, Hilz Baz”.

Maybe “piss off Ken” was what the son in the NZ Post ad said to his dad during their big argument, probably because his dad put on Seven Sharp and had the audacity to pass judgement on Barry’s appearance. Oh, Ken. This is quite the can of worms you’ve opened.

This pink top with a roll neck Controversy, thy colour is cotton candy. At least this top covers one shoulder for Jocelyn to cry on, but the display of a single deltoid was enough to set off viewer Geoff in June 2020. The world was clavicle-deep in a pandemic, but Geoff knows exactly where his priorities lie: on Hilary Barry’s right shoulder.

“Please encourage Hilary to dress properly. Exposed shoulders are for the young,” he tweeted. Scan in, sanitise, cover your shoulders and together we’ll beat this terrible disease of policing women’s bodies. Probably best to wait for a vaccine, though.

This blue top with a wide collar 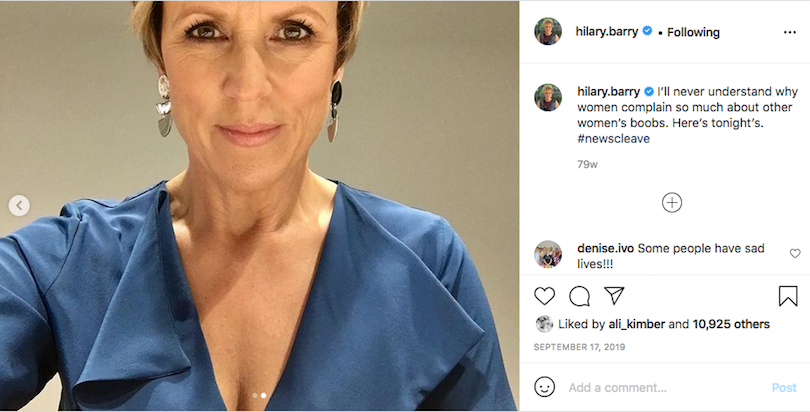 Call 111 and ask for the clothing police, because Hilary Barry has a floppy collar and she’s not afraid to use it. “Hilary, plenty of cleavage on show tonight. Not all that pretty!” a viewer ranted in September 2019, seemingly shocked and stunned at the sight of a primetime V-neck. Cleavage! Putting the duh into decolletage since time immemorial. Barry’s provocative wardrobe isn’t limited to the upper half of her body. Back in early 2019, she dared to take each of her legs and put them in front of the nation dressed in a pair of — wait for it — trousers. Trousers, as we live and breathe! When will the madness end? Deep breaths, New Zealand, or perhaps we should focus more on Jeremy’s suit and tie — because that man never shows any skin ever. 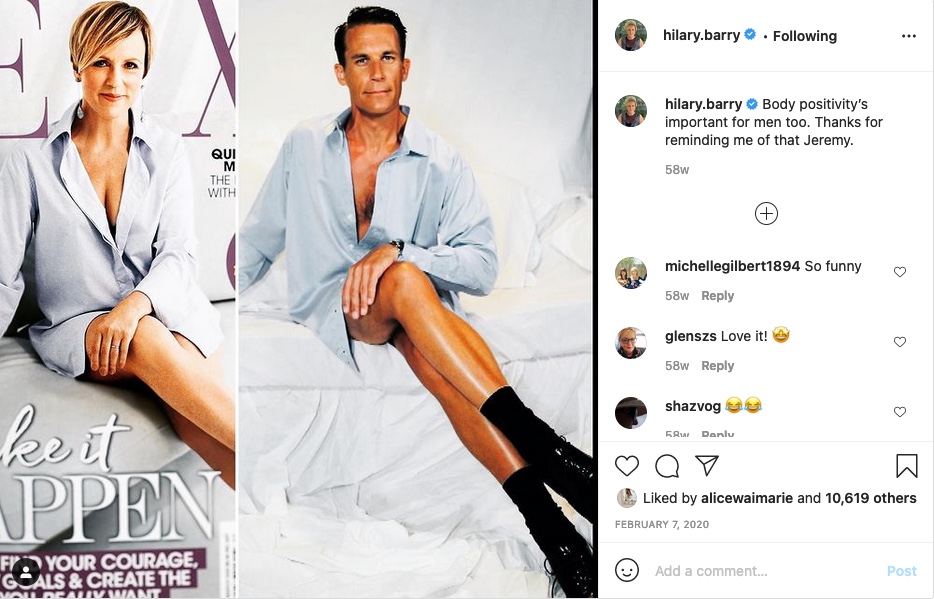