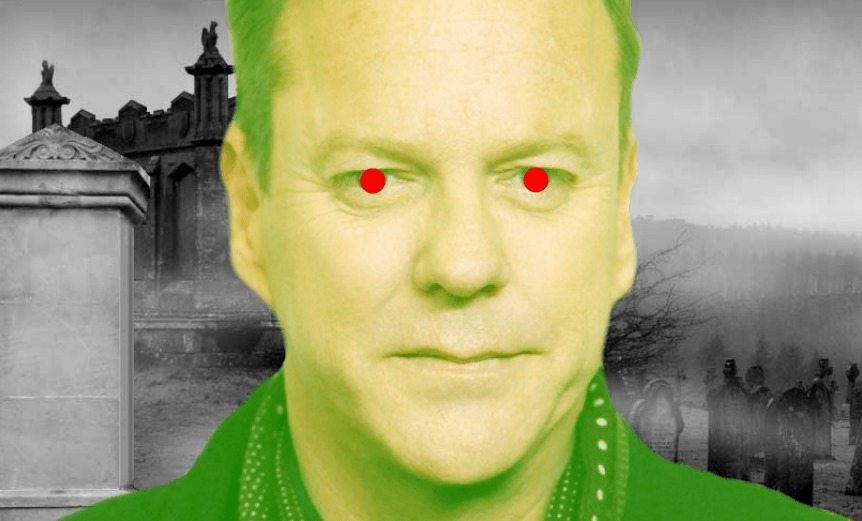 Chilling: Emily Writes has been haunted by Kiefer Sutherland for more than a decade

To continue the thrills and spills of Murder Week, our Parenting editor Emily Writes recalls a Sensing Murder-style haunting of her own… by 24 star Kiefer Sutherland.

When I was a kid I saw a movie on TV that scarred me for life.

A little girl was getting ready for her birthday party and Kiefer Sutherland knocked on the door and attacked her and killed her with an ice sculpture that was on her party table ready for her party.

He broke the ice sculpture on her head. ON HER HEAD.

Her mum Ashley Judd was stuck in traffic and heard the whole thing on the phone and she got out of her car and was banging on car doors saying “CALL THE POLICE” and everyone just thought she was crazy and then all of the balloons from the party floated into the sky and it was VERY UPSETTING.

That’s all I saw.

And I don’t know what the movie was called and I am too scared to Google it. Because basically ever since then I have been terrified of Kiefer Sutherland.

My husband is quite used to me waking, feverish and terrified, saying “NO KIEFER SUTHERLAND NO”.

I am quite sure that even though I know in my mind that Kiefer Sutherland hasn’t actually killed multiple people with an ice sculpture, I would still straight up shit myself if I ever saw him in real life.

It’s hard to convince me that he isn’t evil. Because, also, why would he do that movie?

I figured, given I’m 31 and apparently an adult, I should confront my Kiefer Sutherland fears. I should find the movie again and watch it as some kind of exposure therapy. First I had to find what movie it was. With trembling fingers I typed into Google “Kiefer Sutherland and Ashley Judd”.

And it turns out there is more than one ‘Kiefer Sutherland is an evil guy and Ashley Judd is trying to stop him’ movie. A Time To Kill was released in 1996. It is not the movie that traumatised me. But Kiefer plays a Klansman. So you know. That doesn’t help my fears. I can’t see that movie – I’m already afraid of what he’s going to do to Sandra Bullock.

I went back to look and astonishingly found that my memory was wrong – despite the fact that I never smoke weed because it makes me super anxious and I already talk so much that stoners hate me.

ASHLEY JUDD WAS NOT THE MUM. Sally Field was the mum! Of course that was traumatising for me. Who would want to do that to Sally Field? Sally Field is a great movie mum. She’s like Cher but not glamourous at all and actually probably she’s not like Cher but I would like both of them to be my movie mums.

Anyway – the movie is also from 1996 and is called an Eye for an Eye. Because I’m incredibly bad at maths and very tired I googled ‘how old was I in 1996?’ It turns out I’m 32 now, despite the fact that I have told people I’m 31 for the last year. Then I had this existential crisis – how old am I? I am sure I didn’t turn 32. Have I had so little sleep that I don’t even know how old I am?

Then I realised I hadn’t used the date calculator right and actually I’m turning 32, so it’s OK. Then I was even more tired and I still hadn’t worked out how old I was in 1996. And then I realised that was 21 years ago and so actually that’s quite easy to work out. I was 10.

I always thought the girl in the movie was the same age as me. But it turns out she was 17. Which explains why she was at home by herself when Kiefer Sutherland knocked on her door.

The Wikipedia entry paints quite a picture: Karen McCann is happily married to Mack and has two daughters, 17-year-old Julie (from Karen’s previous marriage) and six-year-old Megan. She lives in a nice house in Santa Monica, California and has a good job in a museum.

Karen’s world is shattered when Julie is violently raped and murdered while Karen listens. Detective Sergeant Joe Denillo assures Karen there is enough DNA evidence to find and convict the killer. He encourages the McCanns to seek counseling.

I stopped watching the movie after the attack, but it turns out Kiefer Sutherland is eventually killed by Sally Field so I feel some closure. Not enough probably to stop having dreams about Kiefer Sutherland but at least I know he is dead and cannot kill any children with ice sculptures ever again. Which you know, the title makes sense now.

I’m not going to watch the movie after all. Because now I know what happens and I feel somewhat at peace. I guess the moral of the story is: if you’re 10, maybe don’t watch vengeance made-for-TV movies? But if you’re 10 you’re probably not reading this. I hope you’re not. It seems my contribution to society has been nothing today.