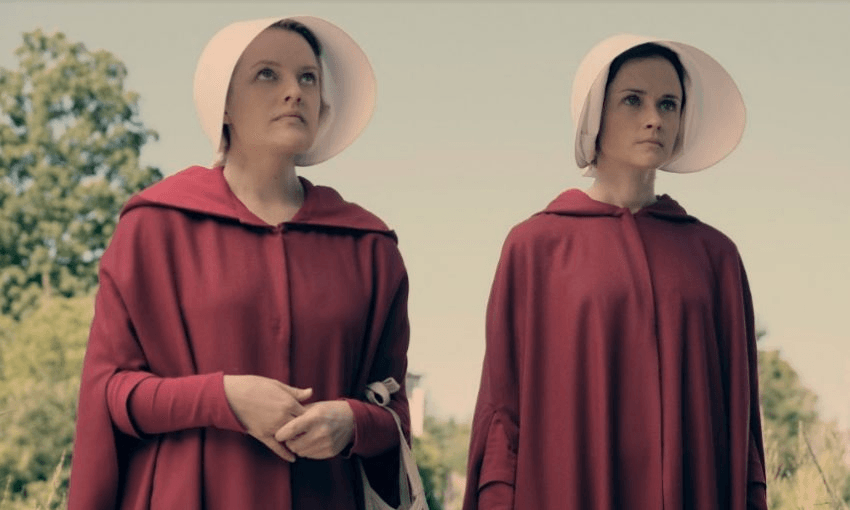 Summer reissue: Is The Handmaid’s Tale… a documentary?

Alex Casey delves into the endless relevance of The Handmaid’s Tale, available exclusively on Lightbox.

This story was originally published on June 8, 2017

I first encountered The Handmaid’s Tale during high school English. They were simpler times, when you could buy three full size (!) Moro bars for $2 at the tuck shop, and the world didn’t feel like it was absolutely, 100% certified fresh, on fire. Breaking through the haze of Chaucer and Shakespeare, Atwood’s dystopia in The Handmaid’s Tale chilled me right to the marrow. Or, more accurately, the Moro.

It was a terrifying vision of a not-so-distant future, where women’s rights were stripped away after the government is overthrown by far right fundamentalism. Sound familiar? The United States becomes Gilead. Women become properties of the state, losing their names, their individual lives, and their histories. With the world a desolate wasteland due to ecological disasters and biological warfare, the remaining fertile few are forced into a life of servitude and child-rearing. It is NOT Eat, Pray, Love.

Now, in 2017, the 1985 novel has been made into an incredible television adaptation featuring Elisabeth Moss from Top of the Lake, Rory from Gilmore Girls and a whole bucket load of dread. And what amazing timing – immediately after Trump was elected last year, sales of the book shot up by 200%. Not bad for a world where none of the women are allowed to read. From what I’ve seen so far, the series is absolutely unmissable. It’s beautifully shot, Moss should win an Emmy with a flicker of her eyebrow, and I’ve never heard such great pop music against such a grim story.

But beyond all that, the show still makes me feel sick to my core. Sick because, like many others have noted everywhere, I can see it all coming true. Is The Handmaid’s Tale a prophecy? A warning? A documentary?

On a quest for answers and comfort, I turned to notoriously smart person, Radio New Zealand’s Megan Whelan, to see what she remembers of The Handmaid’s Tale, a book that she first opened at the age of 20. Turns out she’s since read it at least once a year for two whole decades. Turns out her next tattoo is going to be the wav forms of her reading her favourite Handmaid’s quote aloud. Turns out she buys copies of the book for her co-workers, just to ensure they’ve all read it. Turns out she’s the real freaking deal.

“I love a good dystopia,” Megan says, “and I think the key is to make it seem like something that is totally possible.” This plausibility is one of the key reasons the despairing cries of The Handmaid’s Tale have continued to resonate for decades, building to an unwavering Wilhelm scream in 2017. It’s been called “a cautionary tale… a host of our present problems run amok” (The New York Times), with protagonist Offred’s voice “the voice of a woman we might know” (The Washington Post). And here’s the kicker…

… there’s nothing in The Handmaid’s Tale that hasn’t happened somewhere already.

As Atwood herself revealed in her Reddit AMA, there is (or has been) a woman somewhere in the world for everyone woman trapped in Gilead, whether it’s being forced to be a literal servant, told what to wear, robbed of sexual freedom or simply not allowed to have a bank account. Trump rolling back women’s access to Planned Parenthood is no different to being a Handmaid, forced to carry an unwanted child. Trump tweeting about the travel ban and failing to recognise Pride Month is a stone’s throw from how the Gilead pushes the marginalised into the wasteland of The Colonies.

Even here in New Zealand, there are eerie parallels. Never forget: abortion is still a criminal act and hundreds of women are told every year that their abortion is ‘unjustified’. Primary school girls are sent home for having periods, high school girls can’t show their backs (or fronts) at the school ball, and a woman saying “no” to sex is still not enough. The friggin’ costumes were inspired by Gloriavale FFS! “It’s not so much that we’re all going to imminently end up in Gilead,” reckons Megan, “but that we’ve never really left there”.

Atwood herself has spoken in interviews about waking up in the middle of the night with the horrifying thought: “what if this book is not a warning, but a forecast?” It might seem grim, and by gum the show is grim, but there’s also a streak of optimism the resilience in The Handmaid’s Tale that you can cling to beneath your bonnet. Despite being thrown into an unthinkable shit pile, the women still find ways to fight against the very worst of odds. Yes, it might feel like we are living in the prequel series, but not all is lost.

“The book genuinely also does give me hope,” says Megan, “it says so much to me about fighting and about the importance of telling stories”. There are many intense lessons to be learned from the series, and the good news is that it’s not too late to put them into action. Atwood told Reddit that one of the key messages of the story is the importance of subtle resistance. “Support your leaders who are standing against unconstitutional laws” she advises, “keep informed, as best as possible. Everything is ‘as best as possible’ right now.”

With all of this weighing on my mind, and still harbouring an acute craving for the sweet nectar of a Moro bar, I wistfully messaged my old high school English teacher to ask him if he still taught The Handmaid’s Tale as an allocated text in his all girls’ classrooms. I expected a timely parable like this would be more urgent than ever before, I expected young women flipping the pages feverishly in class, I expected lunchtime plans to overthrow the patriarchy.

“No one reads anymore.”

Luckily the spectacular television adaptation of The Handmaid’s Tale is available exclusively on Lightbox, with the finale arriving June 15: