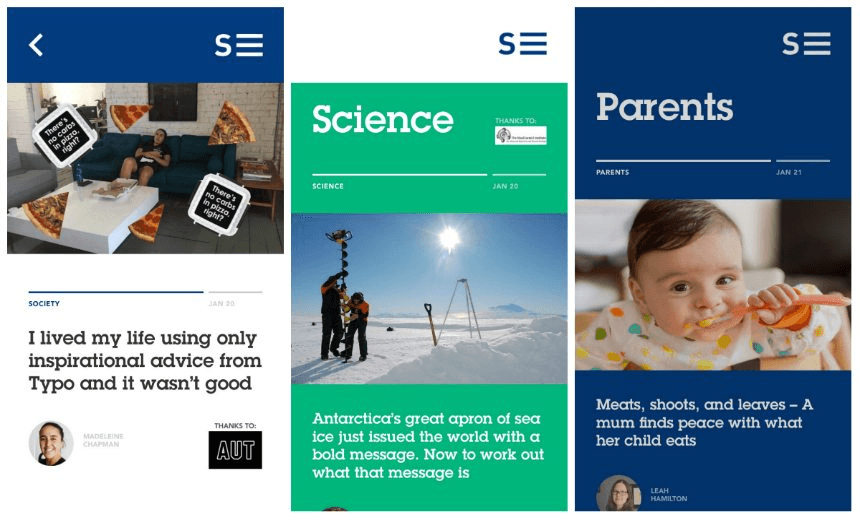 Today sees the launch of one of the biggest developments in Spinoff history: a mobile app for Apple and Android. Editor and publisher Duncan Greive tells you why you should download it now.

One of the most persistent questions since the dawn of Spinoff time in AD 2014 has been “do u have an app?” At first, the answer was “no sorry we don’t”. Until, a few months ago, it became, “no, but we’re fully going to do one.”

Today, though, it changes more radically into “Yes in fact we do have an app and you should fully download it.” This is a really big deal for us – by far the most expensive thing we’ve ever spent money on. It’s a gesture of confidence in our future, our belief that we’re in this for the long haul.

It’s also a way of us getting around Facebook’s tight hold on media distribution. Despite the role it played in getting Trump elected and potentially ending civilisation as we know it (which would be quite bad), for the most part I’m a cautious fan of Facebook. The biggest chunk of our traffic comes through there, and watching a story catch fire on FB and spread far and wide is a true pleasure of the business.

But you do have to pay to play – the money we spend “boosting” posts on Facebook would cover another journalist’s full-time salary. Which is irritating, given that you’ve already paid a bunch to create the content in the first place. The scarier thing is that Mark Zuckerberg can wake up one morning in a bad mood, tweak the algorithm and blow away your whole business. We are deathly afraid of the true boss of global media, and want to diversify our traffic streams. We also see the app as critical in getting our excellent and loyal fans to read more often and for longer.

That’s the business motivation though – what’s in it for you? Well, mainly a really incredible experience as a reader. We consider the app – access to all our stories, sortable via author and section – to be the very best way to read The Spinoff. Not only is it a beautiful reading experience, it also marks the debut of our new site design, which is being driven from the app on up. It will eventually be how the whole site feels, so it’s kinda cool that those who purchase the app will get to experience that first.

And, yes, I did say “purchase”. We have made the radical decision to charge for the app. This is partly because it cost us a tonne of money to develop, and we’d like to at least scratch the surface of recouping it. But it’s also because we like giving our readers the opportunity to contribute money so we can do more stuff. We haven’t yet taken a dollar out of the company – what we make we use to help grow the business, to commission more stories, to buy better audio and video equipment, to hire more people, develop more sections, to declare more wars.

Which is to say that if you like what we’re doing then here is a relatively cheap way to help us out. One thing you should know before you pay $5.99 is that it will in all likelihood one day become free. Probably in the next six months or so. We want The Spinoff to go as far and wide as possible, and ultimately the app will best help us do that by being freely available to anyone who wants it, just like the rest of the site.

If you have a problem paying for something that will one day be free then DO NOT BUY THE APP. But if you want to experience The Spinoff at its best and brightest before anyone else, or want to help us out, or don’t think six bucks is too much to pay for a cool app which you’ll use every day, then please buy our cool app*.

It was designed by our publicity-shy art director and built by Translate Digital, and is available for both iOS and Android. If you really want it, but can’t afford the $6, email info@thespinoff.co.nz – we have 50 codes which we’ll give away, no questions asked.

But if you can afford it, please download it – we’re incredibly proud of the work that’s gone into our new baby, and the work we’ll be able to display within. It feels like a milestone in our development, further proof that we’re playing for keeps.

Thanks for reading this, and for your ongoing support.

* A note re bugs – despite our best efforts to test it, there will likely be the odd bug in the ol’ code. Creating a media app which interacts with all kinds of different embeds, across Android and iOS, with dozens of different pieces of technology interacting – it’s hard work. But it will be monitored and updated, so anything you find get @ us and we’ll fix it as soon as we can.

Download The Spinoff app for Apple on the App Store and the Android app on Google Play.