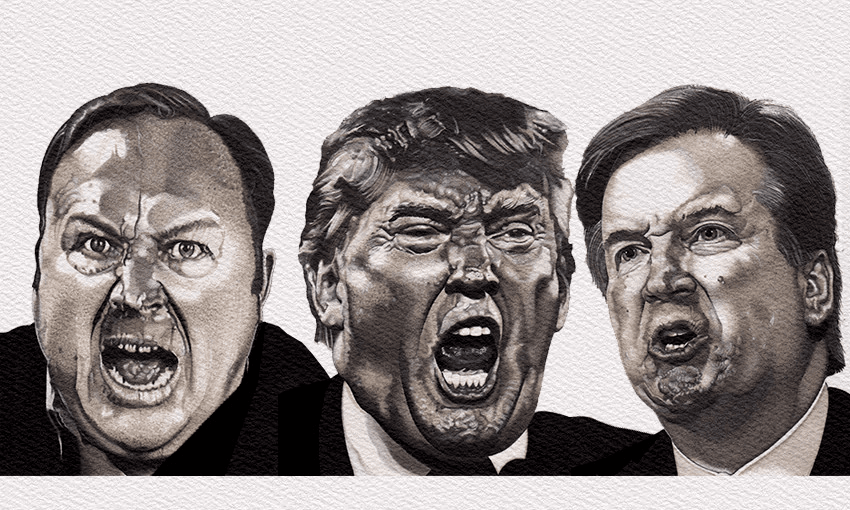 ‘She can draw a ball-sack better than anyone alive’: Hera Lindsay Bird on artist Hannah Salmon

‘Like Escher, if he was more into dicks than staircases.’ Poet Hera Lindsay Bird celebrates the work of New Zealand artist Hannah Salmon, aka Daily Secretion, who creates portraits of angry ‘alpha men’.

Like most teenage punishers who took art history in high school, I spent years resentfully analysing the composition of Colin McCahon paintings and various other New Zealand landscape artists; corrugated iron sheds and hills as relentlessly khaki as any military outlet store. I remember my teacher rhapsodising over the historically unprecedented inclusion of a power line in a landscape painting, and explaining to us what a daring thing that was at the time, to forgo New Zealand’s colonial nostalgia for empty pastures in service of the ugly and the contemporary. I suppose at the time it was startling, like seeing an empty crisp packet floating in the middle of Monet’s Waterlilies. But I’d seen hills with power lines all my life. To me, that’s basically all New Zealand was.

Instead, those claustrophobic scenes of rolling, nicotine yellow paddocks (which looked like the ‘before’ pictures at any suburban dental clinic) filled me with a great rural despair and boredom. Perhaps they were supposed to. Either way, it took me a long time to look past the old French perverts, with their dreamy red goldfishes and extravagant florist bills, and reconnect with local art. These days I love artists like Yvonne Todd, Kerry Ann Lee, Zak Penney, Robbie Hancock, Richard Shepherd, Matilda Fraser and Tom Henry among others. But Hannah Salmon was one of the first artists who changed my idea of what an alternative, national art might look like.

How do I describe Hannah Salmon’s work? Francis Bacon at a hen’s party gone terribly awry? Julie Doucet illustrating a Mitre 10 barbecue expo catalogue? Escher, if he was more into dicks than staircases? As an art moron, the right cultural references are beyond my grasp. Some of Salmon’s drawings are almost medical in their execution. In Meat Face, John Key’s head appears in all its smirking, ham-boiled glory, sweat glinting off his forehead like alpine snow. You get the feeling that the doctors of the future will be able to identify many undiagnosed tumours from this picture. A lot of her work can be found on album art and gig posters (many for her band Unsanitary Napkin). She can draw a ball-sack better than anyone alive, and even her portraits have a genital-like intensity to them. Some of her landscapes evoke old Soviet science-fiction vistas, forests and stars and lichens, otherworldly and precise. Her work has an intensity of darkness to it, which draws the eye in like a vacuum.

My favourite portraits of hers are her renderings of angry men – New Zealand shock jocks, breakfast radio bullies, the racist uncles of our collective unconscious. The Laws and Henrys and Hoskings of the world, faces expertly reconstituted as shrunken testicles. They sit alongside their international counterparts: Trump, Kavanaugh, Duke, Spencer. These icons of male rage are intensely visceral, but at the same time oddly beautiful, every bulging vein, every fleck of spittle, every unruptured aneurysm ghosting the surface of their skin like craters in a hostile alien landscape. Even the black well of saliva at the back of Trump’s mouth seems to glow with a hypnotic intensity, a primordial rockpool in which many single-celled ideas are growing lungs in the darkness.

Part of the pleasure of Salmon’s work is her extraordinary talent at rendering these men in almost photorealistic detail. There are almost too many details, like seeing in multiple dimensions at once. But to compliment her purely for her accuracy is to miss the point.

Why reproduce male rage in a world that is already so saturated with it? I don’t have a good argument. But there is something about these faces, frozen in their latex mask of bigotry and ego which renders them momentarily impotent.

These days I’m more relaxed about landscape paintings. I like hills and rivers and trees as much as the next person, power lines notwithstanding. But if there’s no room in the national canon for Rodney Hide on a chaise lounge with a gas pump for a dick, gleefully ejaculating oil all over a carpet of skulls, then count me out.

Hannah Salmon is a Wellington-based artist, musician and DIY publisher who produces indecent propaganda under the moniker Daily Secretion. Daily Secretion’s output takes the form of political zines, illustrative and sculptural works that pick away at the crumbling facade of patriarchal capitalism. Her last exhibition The Modern Alpha at Toi Pōneke featured portraits of local and international figures who embody the patriarchy and was accompanied by a scent (“The Modern Alpha: Masculine Odour for the Dominant Man”, made by Wellington artist Nathan Taare) evoking the essence of toxic masculinity, with base notes of decay, sperm and faeces, thinly concealed with bad cologne, cognac and cigar smoke.
15th August, 2022