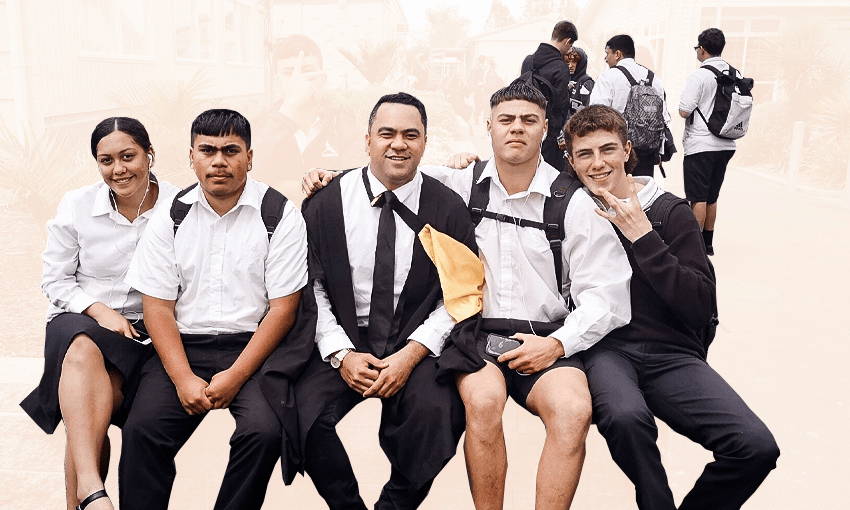 Dr Will Flavell, centre, with some of his students at Rutherford College (Photo: Supplied/Tina Tiller)

Dr Will Flavell, centre, with some of his students at Rutherford College (Photo: Supplied/Tina Tiller)

A research first has highlighted the important role of non-Māori learning te reo for the revitalisation of the language. Charlotte Muru-Lanning spoke to Dr Will Flavell about where the language is going.

Before he started learning te reo Māori, Dr Will Flavell (Ngā Puhi, Ngāti Whatua, Ngāti Maniapoto, Tainui) was already fluent in English and Japanese. His journey to learn the language began at university, where he discovered te reo was his vocation, and he’s now dedicated to aiding its revitalisation. This mission started as a te reo Māori teacher at a high school, and became a PhD thesis that explored the role of non-Māori in the future of the language.

Born and raised in Whangārei, Flavell went to a kōhanga reo pre-school before starting mainstream English-speaking schools. While there were “snippets of te reo Māori interwoven” into his primary and intermediate schools, at high school Flavell didn’t learn te reo. In fact, at the time, it wasn’t something he was overly interested in.

Instead, he studied Japanese for five years at high school. His rural high school didn’t offer Japanese as a subject, so he studied via correspondence. Learning Japanese took him on his first plane trip when he won a scholarship to visit Hiroshima as an 18-year-old.

The catalyst for Flavell deciding to learn te reo happened near the end of his time at high school, in a year 13 history class that focused on the Te Tiriti o Waitangi and colonial injustices.

“Learning New Zealand history propelled me to want to dive deeper into te ao Māori, so I decided that I would learn te reo Māori at university the year after, formally and properly,” he says.

So, in his first year at the University of Waikato, he decided to major in te reo Māori alongside Japanese and law. But halfway through his first year he came across a front page newspaper article that said “over half of Māori boys were leaving school without any formal qualification”. He realised change was desperately needed in this area. The next day he visited the university’s admin centre and changed his degree from law to teaching.

“I’m always fighting for those who are struggling,” he says.”That’s part of my political worldview; that you put them at the centre.”

Growing up, Flavell had watched his mother, the first in his whānau to go to university, work as a teacher. He saw how tiring the job was and had been certain he wasn’t going to follow the same path. But the opportunity to change outcomes for his community completely flipped his perceptions of the profession, and Flavell now describes his change of direction as “the best decision of my life”.

Flavell has been teaching since 2008, and became the head of Māori studies at Rutherford College in West Auckland in 2012. While teaching, Flavell noticed that while there was research on why Māori students learn te reo, there was a gap when it came to research on non-Māori secondary students learning te reo. So, drawing on his teaching experience, he undertook a doctorate in education at the University of Otago, his research focusing on tauiwi learning te reo Māori in high school.

Passionate about nurturing the normalisation of te reo Māori in Aotearoa, Flavell believes that if New Zealand is to meet the government and Māori Language Commission’s goal of one million speakers by 2040, it’s vital that tauiwi are learning the language too.

“Māori should always lead the way in terms of the revitalisation of te reo Māori, but that should not stop non-Māori from playing a supporting role in that,” he says.

There are a number of reasons why this is important  – starting with the fact that there were less than one million Māori listed in the 2018 census. Significant language revitalisation is unlikely to be realised by Māori alone. It’s going to take a team effort. If we want to encourage more non-Māori to speak te reo Māori, we need to understand what makes tauiwi choose to engage with the language.

The six students that participated in Flavell’s research came from a range of ethnic backgrounds; Pākehā, Fiji Indian, Indian, Samoan, Niuean and Tongan, across year levels 9-13. Flavell found various factors contributed to why these non-Māori students took up te reo at high school, one of the clearest being positive experiences of te reo Māori at primary and intermediate levels.

Another important influence was having parents and grandparents who had positive attitudes toward te ao Māori. This in turn meant that whānau were able to successfully support children learning te reo Māori and students had positive relationships with Māori communities and their Māori peers. There was an existing passion for te ao Māori as a whole for these students and a recognition that te reo Māori was an integral part of New Zealand’s national identity. And these non-Māori students were vital allies in educating their own communities, something that is far more difficult for Māori who don’t belong to these communities to do.

While we’ve reached a stage where certain kupu like whānau, aroha and mahi are recognised by most and have infiltrated everyday language in New Zealand, Flavell says there needs to be a focus on pushing forward by learning sentence structures in the pursuit of the ability to speak conversationally.

Many of the students Flavell spoke to felt perplexed as to why te reo Māori, while an official language, isn’t a compulsory subject within the school curriculum. Flavell believes that treating te reo Māori as a compulsory subject along with other subjects like maths, English and science is vital to normalising the language. He believes the government needs to support moves to make compulsory te reo possible by providing resources like scholarships for those who are fluent and training existing teachers.

“When te reo Māori is held in the same view as those subjects, then people will perhaps take notice.”

Since stepping away from teaching in 2019, Flavell has been busy splitting his time between two jobs. As a manager at Auckland Council education not-for-profit COMET Auckland – Te Hononga Akoranga, Flavell aims to “challenge and scrutinise educational thinking and practice to do right by Māori learners across Tāmaki Makaurau”. He’s also deputy chair of the Henderson-Massey local board and is now in his third term. Being the first Māori elected to the board of an area that has a greater proportion of te reo Māori speakers than Auckland as a whole, Flavell has been determined to make te reo a priority across a number of community initiatives, like giving streets and parks in the area Māori names.

Because he loves what he does, Flavell says for the most part he doesn’t think of his busy schedule as work. But when he gets a moment to spare you might find him playing competitive tennis or learning Samoan – a language he started studying five years ago. He’d also be keen to write a novel one day. Growing up, the library was one of his favourite places and he’d love to see more young Māori and Pasifika children reading for fun.

In 2020, the number of teenagers studying te reo Māori at secondary school passed 30,000 for the first time. The amount of people studying te reo full time at a tertiary level rose from 10,200 to 13,500 between 2016 and 2017. Across the country, te reo Māori night classes and wānanga are rising in popularity, with many quickly booking out. Flavell thinks all of this is certainly a call for celebration, but adds that it’s a clear sign we desperately need more resources put into the kete in order to see the language flourish.

The fact that so few learn a second language in this country is a peculiarity to New Zealand. Around the world, multilingualism is the norm, with over half the world speaking at least two languages. Learning a language helps create cultural understanding and Flavell believes that studying te reo Māori, no matter your whakapapa, has huge potential for wide-reaching benefits for Aotearoa.

“Through language, we understand ourselves, each other and the world around us. If we understood each other more, we would live in a more harmonious society.”

Ātea Otago
Made possible by

Welcome home: How first year Māori students find a place at the University of Otago

To open the year at the University of Otago, hundreds of first year Māori students and their families gathered at Ōtākou marae to be welcomed onto the whenua of Ngāi Tahu.
By Alice Webb-Liddall
Partnerships editor
23rd February, 2021

If we want to meet the goal of one million speakers by 2040, it’s going to take a team effort.
By Charlotte Muru-Lanning
Staff writer
2nd February, 2021

An alternative to NZ’s constitutional framework would give Te Tiriti o Waitangi the mana it deserves and Māori a meaningful seat at the table.
By Jacinta Ruru and Jacobi Kohu-Morris
Guest writer
16th January, 2021

Continuing to display memorabilia emblazoned with the racial slur is choosing to ignore the history of the word, its racialised meanings and connection to slavery and white supremacy.
By Lachy Paterson
Guest writer
25th November, 2020

Language, and more: The challenges for kura Māori students arriving at university

Raiha Cook had visited the University of Otago before she left home to study there, but she wasn't ready for the culture shock of her first year.
By Alice Webb-Liddall
Partnerships editor