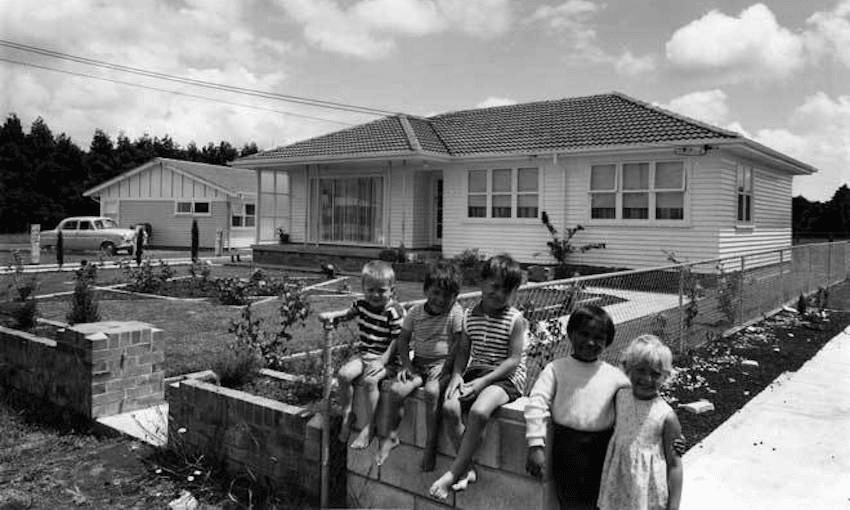 Mere and Ngaro Pita’s West Auckland home is literally a labour of love. The proud grandparents live about five minutes’ walk from Kelston Boys’ High School with their four mokopuna. Originally from the Far North (Ngātiwai and Ngāpuhi), they bought their weatherboard villa after moving to Auckland to work in the 1970s.

Since then, upkeep of the whare has been tough. A bad two-year leasing experiment in the 1980s resulted in it being close to condemned. Damage included holes in the ceiling, missing windows and ripped carpet. At the time, the couple were unable to afford repair costs. Failure to fix things initially made it more difficult, and the couple fell behind in upkeep over the years.

Four months ago, they received a phone call from the Waipareira Trust which changed things. The trust, which provides social and health services to West Auckland residents, had recently launched a Whānau Ora pilot programme providing repairs to homes of elderly people. It’s part of a growing investment in the unique needs of an older generation of Māori. Ngaro, 72, and Mere, 69, were asked if they wanted to participate.

Sitting at his kitchen table, Ngaro admits being sceptical about the programme and embarrassed by the stigma associated with substandard housing. “It’s been amazing for us though, absolutely amazing.

“All the windows, the wires they fixed so we don’t get electric shocks from the light switches, and fixing up damage to the walls and ceiling, and the plumbing They just set up outside and went to work,” Ngaro says.

Today, the house is warm with morning sun streaming into the lounge. Pictures of their grandchildren – 14-year-old twins Kyron and Chelston, their sister Te Arohau, 13, and nine-year-old Jahkahya – decorate the lounge.

After offering me an apple from the fruit bowl, he recalls how problems with the home began when his father fell ill. “We had to go back up north for a few years because my dad was sick. When we came back, it was like there was nothing left of our house.

“The guy who was supposed to live in it and look after it, didn’t. They basically trashed the place – there were holes in the ceiling and about 10 people living here. Heaps of the windows were gone… and the new carpet and furniture and all our linen were ruined.”

“It was so bad,” she says. “When we first got back, we’d be sleeping and people would just walk into the house looking for someone.

“Ever since then, we just couldn’t catch up.”

Repairs to their home occurred sporadically, and only when they could afford it, she says. Ngaro quietly adds they remortgaged the property to help with costs, but it was never enough.

They both lament the difficulties of having a home that stood out for all the wrong reasons. Ngaro recalls a visit from one of their neighbours a while back.

“It was this fella from up the road and he was selling his house,” he says. “He asked me if he could paint my house because he wanted to make it look nice for people coming to look at his place and the neighbours.”

Ngaro says he woke on a Saturday morning to the neighbour and his wife scraping and painting outside. He admits being both bemused and embarrassed. “Well, they did it and it looked good after. So that was how it got a coat of paint.”

Fussing over the boisterous twins Kyron and Chelston who have emerged from their rooms to listen to their koro’s tale, Mere says the couple’s close connection with the Waipareira Trust helped overcome their reservations around the house repairs that came later. Familiarity with staff at the Trust made it easier to discuss what the property needed, she says.

“We’ve been involved [in the Trust] from the beginning, since it was just small – even before we had Hoani Waititi marae. It’s pretty cool to see where they’re at now,” Mere says.

She says it’s about talking to someone in person, otherwise it’s difficult to be comfortable and understand what is happening.

Ngaro adds he still had concerns even after the process was underway. “I just kept waiting for them [Trust] to tell me how much it was going to be,” he says of the repairs. “They had to keep telling me it was no cost and it took ages for me to believe them.”

“You know, it’s just not something we would ever have been able to do without them. And, it’s also not something I wanted to tell everyone about. I was whakamā – having a house that was so bad. I didn’t want people to come in and see it.”

As the number of elderly New Zealanders increase, health and social services are under increased pressure to cater for the needs of an ageing population. This demographic shift presents an added challenge for Māori, whose needs are often ignored in mainstream service models.

Dr Tanya Allport, head of the Trust’s research arm Wai Research, is working on a project to identify what kind of service prototype would best suit elderly Māori like the Pitas. Her team is hoping to report on its findings by July, which looks at what kaumātua Māori want as they age, and how that should shape services and funding.

Research collected throughout the North Island shows organisations are not resourced to provide services specifically for ageing Māori. Part of this is due to a lack of funding, but there is also an issue around what information is available.

It is crucial to address this as the number of elderly people continues to increase – both for Māori and non-Māori, she says. Notably, population forecasts show in the next two years, one in eight Māori will be over 65. In 2001, only one in 33 had reached retirement age.

“While perhaps, in some places around New Zealand, Māori service providers have found a way to deliver services to elderly, it’s not because the government were giving them money to do that specifically,” Allport says. “Often, it was those providers making creative choices about the resources they had which translated to something in the community.”

Creating a framework which builds on these types of approaches so elderly Māori have access to everything they need is the next step, she says. “It definitely has to be aligned with Whānau Ora and be a holistic service. It also has to be flexible so that it can deal with the complexities and differences from one place to the next, enabling a dignified ageing process.”

Back at the Pita house, we discuss Allport’s research. Both Ngaro and Mere believe it shows a way to create security for their family and many others. Mere is particularly hopeful.

“When we got our house done, I actually gave them the names of four other whānau who were in a similar situation,” she says softly. “They all got help with their homes because [the Trust] were able to track them down and see what they needed.”

She emphasises the need to promote community engagement and personal relationships when working with elderly.

“I think that’s what is really important for us old people – making that contact. Because, otherwise, you just wouldn’t know how many people are out there that need help.”