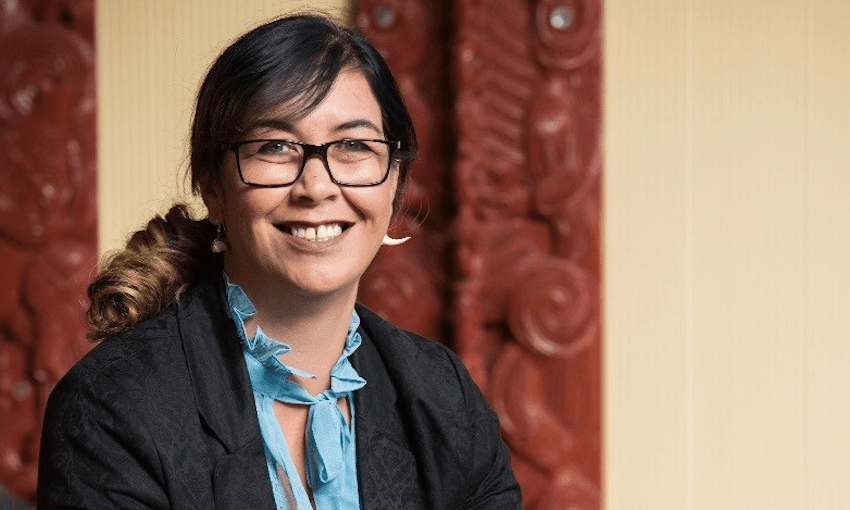 In June 2018, Rawinia Higgins was appointed chairperson of Te Taura Whiri i te Reo Māori. She’s the first woman and the first te reo Māori second-language speaker to hold the role, and during Te Wiki o te Reo Māori, she sat down with The Spinoff to talk about her life.

“You can’t do a haka without the language, otherwise it’s just a whole lot of gesturing… Some very weird gesturing. A fundamental of haka is the language, and people using that as a symbol of their national identity has allowed them to see that it’s just as relevant to anybody who’s from Aotearoa.”

The youngest, first female and first speaker of Māori as a second language to be appointed to the role of Māori language commissioner, Rawinia Higgins (Ngāi Tūhoe) has big goals for te reo Māori revitalisation.

The age-old myth that te reo has no use outside Aotearoa is slowly dissolving, and Higgins is leading that charge. “It feels like we’re starting to shift. Part of that is global awareness, and the growing awareness that there are benefits to being bilingual, but there’s also that connection to us and our identity and taking some national pride in wanting to learn te reo Māori.”

Higgins grew up speaking English at home. Her mother preferred to speak te reo Māori when with her friends, but Higgins and her brother couldn’t speak it. When she turned 11, curious to understand the conversations between her mother and her mother’s friends, Higgins asked her parents if she could move to Rūātoki to live with her grandmother – a fluent speaker of te reo Māori – and attend Rūātoki School, the first officially bilingual school in the country.

“Between the school and living with my kuia and my aunties and uncles and cousins, where it was predominantly spoken, that was my first full-immersion experience and that’s where I learnt the reo.”

But that avid curiosity didn’t stop once Higgins could speak the language. She studied te reo Māori throughout school and into university, where she wrote all but one assignment in te reo.

“My PhD. I wrote that in English… partly that was because at the time you were expected to write a translation, and in my mind they would have to give me two PhDs for that, because I’m writing two theses, but that didn’t go down very well.

“I said in order to write it in one language you are essentially writing it again. It’s not just a translation, you have to reframe the concept, so it’s almost writing a brand new thesis. Not long after starting my PhD, the University of Otago changed their policy to allow you to write in te reo Māori.”

Higgins can also be credited with much of the work that makes up the basis of current Māori language revitalisation legislation, having chaired the review into the Māori language bill in 2015. This bill affirmed te reo Māori as a taonga and established Te Mātāwai, the independent statutory entity charged with revitalising the language.

Higgins could never have imagined two years on she’d be sitting at the helm of the reo Māori revitalisation ship. She says sometimes her role as Māori Language Commissioner can be “overwhelming,” especially when she considers the mana of her predecessors.

“The role I played as chair of the review and resetting the policy platform for the language gives me a level of confidence in understanding what the objectives behind the legislation are, so I feel comfortable with that. I get a little uncomfortable thinking about my predecessors and the mana that each one of them, right back to the beginning, has had. I try not to get overwhelmed by their mana and ask what can I do in my tenure to forge ahead with the bigger objective of advancing the language across our country.”

That objective seems to be coming true, with te reo Māori courses around the country being oversubscribed and well-known media figures like Guyon Espiner and Jack Tame incorporating te reo into their daily broadcasts. It’s an exciting prospect to see interest in te reo Māori growing, and Higgins believes this is just the beginning.

“Some people call it a marathon, I like to call it a relay, because it’s an intergenerational strategy. It takes a lot longer than what people want. It takes one generation to lose the language, it takes three generations to restore it, so it’s a long game.”

It wasn’t long ago that school children were beaten for speaking Māori, and the effects of this have lasted through generations, in what Higgins calls “language trauma”.

As far as her own journey goes, Higgins’ plans for her time as commissioner are simple: to inspire as many people as possible to begin their te reo Māori journey.

“I’m hoping that we continue to grow in momentum with people wanting to experience te reo, learn te reo and engage in te reo and participate and use te reo wherever they can. The more people who use it, the more it starts to normalise the language. If I think about the revitalisation approach three generations on, I really do hope that we have high-functioning bilingual children across the whole country.”