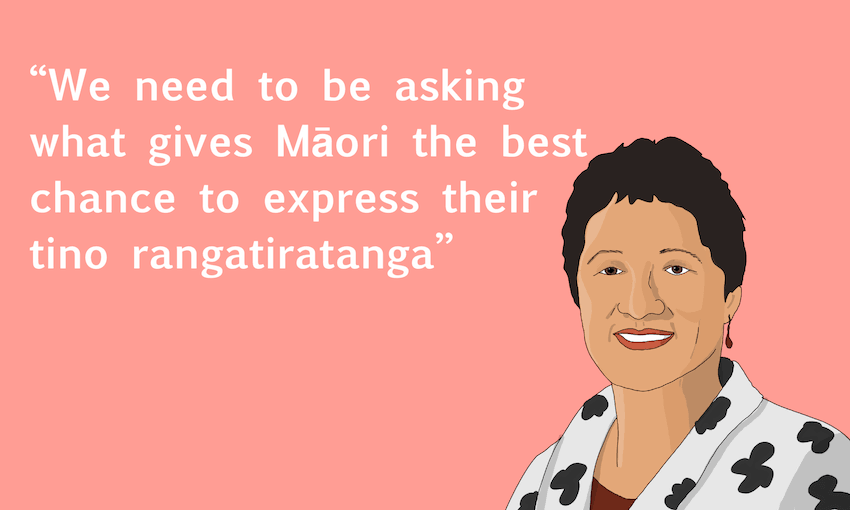 What lies beyond the new Labour government’s ‘first 100 days’ for health policy and outcomes for Māori? In part three of our series on the future of Māori health, former Ministry of Health advisor and policy analyst Gabrielle Baker asks how we can be better Treaty partners in the quest to achieve equity.

Last week I said equity should drive a new and improved health system. This week I’m adding that equity has to be achieved in the right way. In New Zealand, ‘the right way’ means recognising indigenous rights and honouring Te Tiriti o Waitangi.

“Addressing Māori health isn’t just an equity problem. Māori are a Treaty partner. As people – as a Treaty partner – we have to have a say over decisions.” This is what Janice Kuka told me when we caught up as the new government was forming. Janice is the chief executive of Ngā Mataapuna Oranga in Tauranga, one of the four Māori-led Primary Health Organisations in the country. “We need to be asking what gives Māori the best chance to express their tino rangatiratanga.”

New Zealand has a chequered – mostly terrible – history of valuing Māori rights and decision making. It is the familiar story of colonisation, but with our own unique flavour and our own stories.

One of these stories is of Napier hospital, which illustrates the system’s reliance on Māori resources from the outset without respect for Māori rights or Treaty principles to how it went about its business. In the wake of the closure of Napier hospital in the 1990s a claim was brought to the Waitangi Tribunal stating that the Crown had failed to provide for the health and wellbeing of Ahuriri Māori and that Māori had not been adequately consulted on the hospital closure.

The Waitangi Tribunal found that Donald McLean made a verbal promise in 1851 to provide a hospital as part of the Ahuriri land transfer and that this was part what local Māori understood they were getting from the deal. Although a hospital was built, the Tribunal found the way the services worked in practice didn’t always honour the principles of the Treaty and they certainly weren’t designed to meet local Māori health needs. This was especially true historically but even up to the 1980s and ‘90s the government wasn’t working in the ‘right way’ to involve Māori in decision making, responding to Māori need or consulting adequately.

But we are better now, right?

Of course things have changed since the 1990s. There are district health boards (DHBs) running our hospitals, contracting health providers and spending most of the country’s health funding to improve the health of people who live in their districts. Parliament has been explicit about what working in ‘the right way’ looks like for DHBs by setting an expectation in the New Zealand Public Health and Disability Act 2000. Under that legislation there are mechanisms for Māori participation in decision making and service delivery in order to recognise and respect the principles of the Treaty of Waitangi.

There are well meaning people and organisations wanting to do better for Māori but many are a bit confused about how to do it and often don’t do it the ‘right way’.

One common approach is to set up advisory groups for projects or policy problems and seek a Māori person to join the group. Most of the people I spoke to for this article series have been the Māori ‘representative’ on a group before. And most have found it exhausting as a lone voice having to show evidence of Māori health need (as if we don’t know enough about the inequalities already) and be an expert in every health field in order to advise on the solutions while speaking for all Māori.

Another approach is to collaborate with communities. The idea that Māori communities could be real partners in decisions has appeal, and there have been recent attempts at this – one of these is the Māori Party-initiated Whānau Ora programme.

Janice Kuka tells me Whānau Ora has been positive in this regard. “It’s allowed us to say to people ‘what are your aspirations?’ And it isn’t all the obvious stuff so it forces us as a group of providers to work differently. Taken to the next level this would force non-Māori organisations and systems to work differently too. It could shift the power.”

But most community programmes never get a chance to thrive because they seem risky to governments who want to say from the outset exactly what they are buying and exactly when it will be delivered. The ‘right way’ can sometimes mean being bold and doing things differently because you know the status quo isn’t working for Māori.

Thirdly, health organisations can build Māori expertise internally. Many people I spoke to could give examples of Māori people who are highly skilled in Māori health and equity who work in policy agencies, DHBs or health organisations. In contrast, some organisations confuse Māori expertise with Pākehā who take on roles where they speak on behalf of Māori. Another approach is that organisations build cultural expertise in place of hiring Māori in positions of influence that can make decisions about the health services and system. One of the people I spoke with put it this way: “I talk to staff at these organisations and they don’t understand what you’re saying. This isn’t good enough – every single person there should understand equity. We need to move past mere good intentions.”

Case study – The Ministry of Health

When I talked to people after the election almost everyone wanted to chat about the Ministry of Health and its approach to Māori health. People are interested in this as a modern day story of how the health sector is responsive to Māori and the value it places on Māori involvement in decision making.

In 2016, Te Kete Hauora (the Māori Health Business Unit) was disestablished in favour of sharing the responsibility for Māori health throughout the ministry.

All the teams that were part of Te Kete Hauora remained (albeit split up from each other) and a new Māori leader was appointed without a team or budget, but with a seat at the executive table.

Making everyone in an organisation responsible for Māori health is a good thing. That was the advice around equity last week. But improving Māori health was supposedly always everyone’s responsibility at the Ministry of Health. There is a concern too that Māori expertise within the organisation has been compromised as a result.

(I was part of Te Kete Hauora, managing the Māori health policy team, and for a short spell I acted in the Māori leadership role while the permanent leader was recruited. So of course I am not ‘objective’. But editing out what people said to me wouldn’t make me more objective, so I’ll go on.)

Matire Harwood, a GP based in South Auckland and Māori health researcher, talked about this. “The loss of the Māori Health Business Unit at the ministry has impacted on momentum to improve Māori health and has resulted in a loss of expertise to the sector.”

Janice also talked about her concerns that the disestablishment of a Māori team at a national level has had a flow on impact: “Some Māori health units have disappeared or dropped down the ladder in terms of influence when they used to be able to make funding and planning decisions.”

So, what can the new government learn?

Since the ‘90s the health sector has put things in place to demonstrate Māori participation in formal decision making. Yet, where there are not formal rules, ad hoc attempts at involvement have had patchy success.

One of the gifts the new government has is that the Waitangi Tribunal is set to consider some of these issues as part of the health services and outcomes Kaupapa Inquiry. This inquiry groups together the health claims the Tribunal has not yet heard. It is a big task and the Tribunal is still figuring out how exactly to approach it, so a report is a few years away. The government hopefully sees the value of the Kaupapa Inquiries overall and is prepared to adequately fund the Tribunal so the inquiry is completed swiftly. The Tribunal findings, and even the process of hearing claims and providing information to the Tribunal for the Crown will be a valuable resource for the health sector in better understanding how it can do things in the right way for Māori, with Māori.

In the meantime, the government and minister of health can raise their expectations of the Ministry of Health, DHBs and others so they become more deliberate and transparent in how they include Māori in decision making from the outset. Smarter use of advisory groups, actively seeking opportunities to work with communities and building capacity and skills within agencies and health professions should probably make the list too. It is also important not to lose ground – to maintain those formal mechanisms we have and look at how we can increase the influence of Māori relationship boards in a quest to better support Māori participation in decision making.