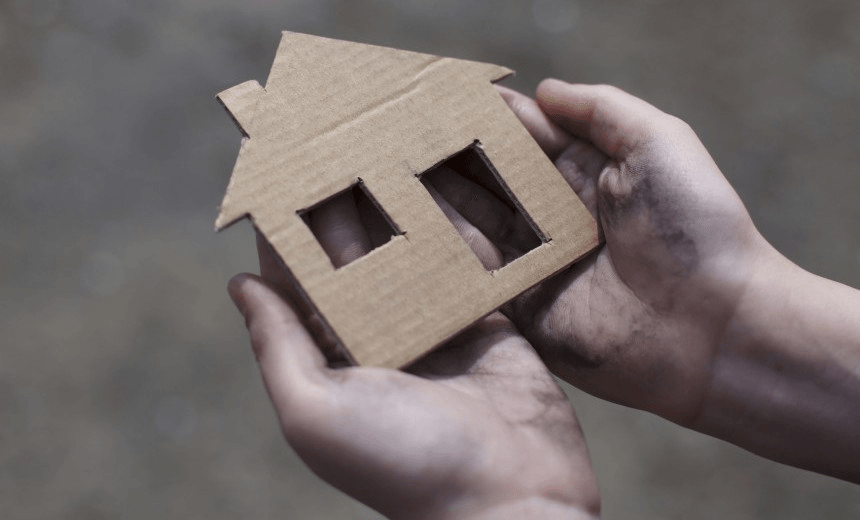 It was reported in January that Tauranga now outranks Auckland as New Zealand’s most unaffordable city and in the city’s pressured rental market, landlords these days have their pick of tenants and of rental price. If those landlords track the national average, 80% of them will own one rental property and 97% own fewer than five – owning rental property in Aotearoa is still largely a small-scale business. Most of our landlords are Pākehā and renters are disproportionately (and increasingly) brown.

In this market, housing has moved from being the right to have a home to an investment for one’s own profit. When the aim is to maximise the value of an asset, the humanity of those renting is lost.

Awhi* was happy in her three bedroom Tauranga kāinga with her two young boys, but the increasingly tight rental market meant she endured twice-yearly rent hikes.

Clearly, the pace of those increases was too slow for her landlord, and she gave Awhi and her family 90 days’ notice. When they left, the landlord raised the rent from $290 a week to $380 a week. Within a week, the house had new tenants.

Every week, Awhi would go to real estate agents to follow up leads for rentals and to the library to trawl the papers. One agent in Pāpāmoa tried to help her in the months and years that followed. But solo mums with children are not a popular choice for landlords.

Awhi and her boys moved in with friends. Because it was overcrowded in the whare, Awhi rented a portable cabin for the backyard. They were there for nine months. Then a letter arrived for her friends: a 90 day eviction notice.

The family moved on. No landlord was interested. Awhi went to a whānau orchard and erected her nylon tent. She kept the boys spirits up: an adventure! That adventure lasted six months until a storm snapped all the tent poles in winter.

Awhi was desperate. She told me, “I didn’t care. I was ready to take a place for $550.” That was everything she earned a week. Finally she was desperate enough to be noticed by Work and Income and they were moved into a local motel. She said the motelier was nice to her, but she still shakes her head at the cost: Work and Income were paying $1,000 a week.

At the end of that week, WINZ shifted her into a family house with two other families. Awhi said she was “way out of my comfort zone,” as the two other families were both gang affiliates. But she found generosity and respect there.

Then she got a phone call from the real estate agent in Pāpāmoa: she’d been approved for a whare that she had applied for 40 days earlier. The next day she got the keys.

Awhi and her boys have been in that house for six months. It’s had its challenges: she couldn’t sign up with a power company initially because of her credit rating. When a pay-as-you-go company agreed to take her on, they sent round technicians to hook her up. But the power board was surrounded by asbestos, so they wouldn’t do it. After three months she got power.

Her boys were at kura with my tamariki; this whole time they never missed a day. Awhi paid their stationery bill. Awhi paid the whānau contribution so her boys could go to the the national primary schools kapa haka championships. Awhi made sure they were in the correct uniform every day.

Her car broke down early on, so she used the public bus to collect her boys when the school bus arrived. Some days the bus was late or she missed it and she would run for them. They would sit at a bus stop by themselves on a busy main road waiting for Māmā.

Read The Side Eye #5 – Churned Out: The importance of security of tenure

Hine* had a lovely home with her mum, her four tamariki and other whanaunga. They got on well with the landlord. But then the landlord’s son got a job in Tauranga and Hine’s mum got a 90 day notice. The landlord’s son waited impatiently while all 11 of them moved out.

Like Awhi, Hine’s week consisted of rental advertisements and real estate offices. No one wants toddlers. So a whānau member offered her a whare out in the bush.

The house was originally a one bedroom 1960s bungalow, but over the decades other rooms were patched onto the structure. The place heaved when she opened the door; she had to flea bomb the whole whare three times in the first week.

The rats were not so easily dissuaded; the tamariki made a game of catching them. The iwi of mice in the laundry were left in peace.

To deal with the moisture, Hine bought every $2 shop dehumidifier she could find. They sat like sad R2D2s in every room.

But her youngest got sick. And so Hine went to the hospital where the diagnosis was rheumatic fever. Thankfully they’d caught it early. But it warranted a visit from the hospital social worker. When she came to visit the whare, she was horrified.

It had been two years. Not once had a landlord called Hine back. The social worker’s report got the cogs turning.

The next week, they were moved out and into a motel. The motel was full of whānau in emergency accommodation. Hine is still angry at the drunks: “Those people are the reasons that people can’t get support when they need it.” Work and Income paid $1,500 a week for a room.

Within two weeks, the rheumatic fever diagnosis had got them all a Housing New Zealand whare. Hine says Accessible Properties have been amazing, and they live in a modern, warm and dry kāinga.

Like Awhi, Hine’s tamariki attended kura with my tamariki every day. In the course of talking to her, I found out that every week she would buy a small pack of Milk Duds for her son. His best friend is my youngest son, and the two of them swap kai every day; my son gives him a homemade biscuit, Hine’s son gives him a Milk Dud.

When a kāinga is no longer a right, when Awhi and Hine’s stories are run of the mill, who are we as a people?

*Names have been changed to protect the mothers’ identities.

Read the rest of our Rent Week coverage here.